Do you want to Vomit?

Notes from my Research

- Schore believes that shame experiences emerge as a function of stressing the ventral tegmental area (the dopaminergic pathway) and the activation of the lateral tegmental area (a noradrenergic pathway). Pg. 214
- The orbitofrontal cortex regulates the motility of the proximal and distal parts of the gastrointestinal tract, which is innervated by the vagus nerve and sent up to the nucleus of the solitary tract, which is itself a target of orbitofrontal axons. Pg. 220; vagal connections to an area adjacent to the nucleus of the solitary tract – the area postrema – is involved in emesis (vomiting) – as well as experiences of disgust. The closeness and similar circuitry of these two areas demonstrates the close relationship between disgust and shame affects. Disgust expressions, which were originally evolved in relation to bad food, is enacted and displayed in relation to ‘bad relationships’. See quote

“The functional similarity of shame and dissmell-disgust in breaking attachment bonds is thus related to structural similarity of the orbitofrontal-medullary mechanisms that underlie them.” – Allan Schore, Affect Regulation and the Origin of the Self: The Neurobiology of Emotional Development; pg. 221, Routledge, 1994 (2015)

“In the physiologically hyperactive state of shame, an affect that elicits greater awareness of the body than any other emotion (Izard, 1991), the individual experiences an influx of autonomic proprioceptive and kinesthetic feedback into awareness.” – Allan Schore, Affect Regulation and the Origin of the Self: The Neurobiology of Emotional Development; pg. 211, Routledge, 1994 (2015)

The divine is a part of our human condition. It is a level of consciousness which, in line with everything else in nature, constitutes a very impressive phase shift into a form of relationship with nature where 'self' and 'other' are seen as they ultimately are: as a Singularity. That said, logic and objectivity still exist even as we experience such a profound state of awareness and unity. Reality changes - the shaman can 'descend' into the depths, or 'ascend' to the heights. The general effect on consciousness is well demonstrated in by Bran in Game of Thrones: dissociation of self from the "lower ego".

Is this the case though? Does the Deus ex Machina really become "god" when he merges with nature? Or do the scripts which make up his brain - the imprintations of the interactions he's had with others - determine the content of the belief, and therefore, even as the state dominates consciousness with its 'truth', it still, astonishingly, isn't yet the 'ultimate truth'. The universe, it appears, does not disclose itself in one shot to anyone. Jesus, Moses, Zoroaster, and the Shamanic traditions of yore: every one of these people were constructed by their social environment, and made to experinece a truth which was, again, astonishingly myopic in its sense of what does exist, or what could exist.

In the ancient mind - and in many minds today, speculative metaphysics is treated as fact, yet there are obvous epistemological problems with people who make these claims - or who feel that "everything is settled". There is much of interest in ancient thinking, yet I do not think ancient thinking offers the sort of liberation from suffering the way science can. Science can take us out of ourselves and OUT OF OUR NARCISSISM. A big way it has done this in the last 50 years has been through the neurosciences, and in particular, the study of development, which includes knowledge from neuroanatomy (mapping of parts), neurophysiology (mapping how the parts connect at the physical level), neuropsychology (mapping the regions of the brain that interact to produce the phenomenological state it correlates with), developmental psychoanalysis (which studies how relations with the environment affect brain development) genetics and epigenetics (mapping the way interactions affect gene expression).

So when the perceiving mind looks at reality, and experiences the highest level the human mind can attain, and the effect - or affect - produced is negative - why is this? The notes I posted above explains this: the orbitofrontal cortex and the medulla oblongata have ascending and descending connections built around dopamine and noradrenaline. The former produces 'desire', whereas the latter produces different states, such as disgust and shame.

When someone looks at you - or when you were young, you may have been looked at by another with a facial expression of disgust.

“I argue that the process of socialization, usually conceptualized behaviorally or cognitively, is transmitted affectively, and that shame is the essential affect that mediates this socializing function. Specifically, the mother utilizes facially expressed stress-inducing shame transactions which engender a psychobiological misattunement within the dyad. Such visuoaffective communications trigger an inhibition of the infant states of hyperarousal that support positive affect.” – Allan Schore, Affect Regulation and the Origin of the Self: The Neurobiology of Emotional Development; pg. 200, Routledge, 1994 (2015

If the organism is biosemiotics - as more and more biologists and psychologists are beginning to accept - than the inevitable result of a traumatized mind, contemplating the beauty of nature and reality, is to feel alienated and disconnected. The disgust circuitry (primarily the lateral tegmental and orbitofrontal circuits) which evolved to alert an animal to a noxious substance, or when eaten, is activated to trigger vomiting. As sociality evolved, it became integrated into social-relationships, and became a behavior that alerted an Other that something about them was 'disgusting', which produces a feeling of shame as a result.

Both these results are a function of past-experience. A past interaction arbitrarily 'informs' a present state - and if a contradiction is found - disgust emerges.

A body which has been negative known - looked at with disgust because it did something that the observing other perceived as wrong, and therefore was "disgusting" to them - will have a profound shame response, and this shame response, although 'not consciously known', is very much a semiotic 'holon' embedded within brain functioning that guides, or determines, the behavior of the idealizing conscious mind. 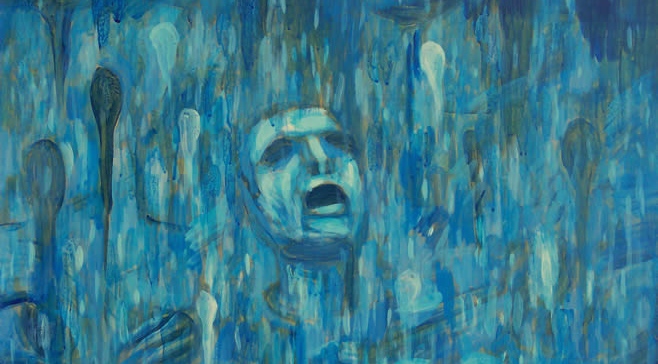 The above picture captures the feelings of distress the mind experiences when it experiences divinity: the contrast is absolutely grueling. The attachments that have formed, the way of being that has been developed, and all the unconscious "semes" which lie buried in the person's past, intervene from the bottom up - forming the embodied background, the 'unconscious known', and so the self that contemplates the ultimate truth, the ultimate unity of the human self with the universe, experiences its existence, and in particular, the sheer INFINITY of TIME, as painful, motivating the nihilistic mentality - motive - which is oftentimes linked with shamanism.....

The moral of this thread? All masochistic, trauma-fetishizing belief systems are functions of a structural dissociation between the self and its denial of how history - and other persons - have created in them a perceptual reality and need to believe that the "heroic" journey - adventure for the sake adventure, beyond all concern for morality - is itself "fundamentally the human need", and not, IN FACT, a function, completely and entirely, of an incredib ly abusive history fueled by minds that were similarly needing the same thing you need - and like you - were willing to believe something that was clearly false, but couldn't be definitvely disproven until the age of science and the technological means we have at our disposal to prove how certain interactionsp produce certain biological effects.

This is a very liberating idea, especially for people with a transpersonal focus, and who think in terms of 'multiple existences', past and future, and so assume that their present existence offers a legitimate vantage point on the truth of human reality - as if the oldest and most primitive cultures "had it right" (i.e. shamanism) and that the present civilization we have, which has produced more data and knowledge than ever existed before, is somehow 'not important'.

This selective attention is how the traumatized brain works: it dissociates what causes it suffering, and idealizes, as part of its self-organizing consciousness process (i.e. its ego process) what it 'feels it needs'.

Truth is imagined to be totally subjective - and that feels nice and good to a mind that has been abused and has in turn abused others. Symmetry - and not caring for its facticity in the functionality of humans - cannot enter the mind of a person that is struggling to find the air to keep on breathing.

So what is the ultimate solution? Can people like this - nihilists with fantasies about an 'esoteric order' and a long, never-ending rebellion against existence - learn to accept objective facts, and perhaps, loosen up on their feelings, and perhaps, except the wisdom of buddhism? To just let experiences pass? Ignore metaphysics - connect with others - because this, and only this, will give human beings the wiggle room to develop the sorts of cultures we need to produce humans that DON'T have traumatized brains - and therefore, do not feel 'broken', or ripped apart, or forced to choose, when contemplating divinity: as if the ego - and relative truths - couldn't COEXIST with the ultimate truth.

The third: the middle. Long ago this idea was understood. A mystic intuition which seems, at least from my perspective, to have a lot going for it.

Time is a beautiful thing, and reality, when we respect and honor it, can be "the whole", whereas we, living within the world and exist, can accept with pleasure and alacrity the adventure of living.

Adventure, in other words, needn't and shouldn't be opposed to morality. Evolving ourselves in directions - exploring space - and cultivating a spirituality - all of this can coexist, because each level, or plane, offers legitimate truths.

The universe is so much bigger than we realize. It is not depressing or dispiriting. It is not what our traumatized brains, holding the baggage that they do, make us believe.

posted on Mar, 29 2018 @ 08:37 PM
link
Well, I actually understand that stuff, I do not know if it is necessary to state it. Just have a beer and pizza and you can fire up all those pathways, if you eat too much you will puke and be embarrassed till you get another beer. I think that is what it is saying with the noradrenalin and dopamine pathways.

I suppose years of eating all the junk foods that stimulates dopamine is supposed to make you feel embarrassed because you are fat. I am too old to worry about fat.

So why would a person feel distressed when they experience divinity? If you decide to change you have to forgive yourself for your past sins, I know it does not make things right but you benefit from the change most times. Others may not forgive you, that is reality. 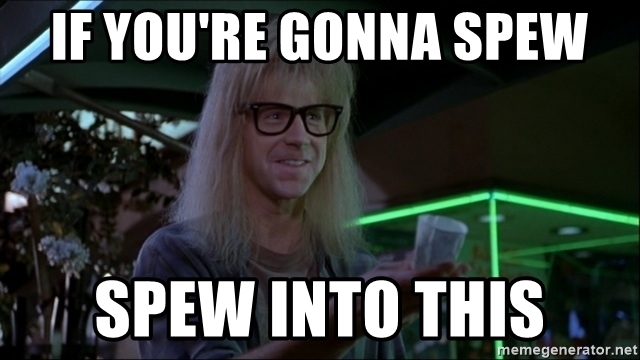