This is imho especially surprising as such galaxies are typically heavy on dark matter, like Dragonfly 44 which is thought to consist almost entirely of dark matter.

There is some speculation that the dark matter might have been swept away due to some event. The neighboring giant elliptical galaxy might have played a role.

It also kinda blows alternative gravity theories out of the water.

The image is fantastic and draws quite a stark difference to the structures we're used to seeing in galactic formations.

Was reading early on the BBC

here is a slightly easier, bite size link, I still dont understand though

Parsing what that means isn’t easy, but it does lead to one clear, if counterintuitive, conclusion, the team argues: “Alternatives to dark matter have trouble with this object,” van Dokkum said.

Theories like modified Newtonian dynamics and a new idea called emergent gravity propose that there is no dark matter. Instead of galaxies being filled with mysterious invisible stuff, these theories postulate, gravity works differently than expected on galactic scales, in a way that only mimics the presence of dark matter. But if that’s true, van Dokkum explained, then every galaxy should obey these different laws of gravity and look as if it contains dark matter, with no exceptions.

Theories that challenge dark matter’s existence will need to explain away the new claim about galaxy NGC 1052–DF2 to survive.

Quantamagazine.org - A Victory for Dark Matter in a Galaxy Without Any.

Proving the negative is now done (if the observation holds that there is no dark matter in that galaxy), time to see what the dark matter nay sayers will do now.

Personally, "emergent gravity" just seemed wrong to begin with. A philosophical cop out. Like, "Assuming god exists..." then arguing some emotional belief in god. Gravity does not just seem to "pop out" as what we observe.

I love that the more observe about universe the more me realize we really do not everything. Shame Webb is having sun shield and valve issues! I bet there are even more things out there that are going to make us pause and scratch our heads!

posted on Mar, 28 2018 @ 09:53 PM
link
A theorized substance we can't actually directly touch or study up close is acting like we don't expect.

originally posted by: Teikiatsu
A theorized substance we can't actually directly touch or study up close is acting like we don't expect.


originally posted by: Teikiatsu
A theorized substance we can't actually directly touch or study up close is acting like we don't expect.

Like I said, we can't actually directly touch or study up close.

Well, the fact is that it isn't acting like anything because the stars account for all of the mass that has been measured. The vast majority of this galaxy is composed of globular star clusters that are very dense and large in size. Its structure is fundamentally different than a what has come to be typical of most galaxies we've observed. The dark matter halo that is characteristic of large galaxies is undetectable even by the passive means of measuring total mass.

posted on Mar, 29 2018 @ 07:53 AM
link
Maybe all the dark matter was harvested and used to build light speed railways for the interplanetary travel of its inhabitants..

originally posted by: projectvxn
This is what is abnormal. It isn't that dark matter itself is doing anything, but that it isn't there to begin with.


originally posted by: projectvxn
This is what is abnormal. It isn't that dark matter itself is doing anything, but that it isn't there to begin with.

Ok man. Get on the same page.

You said that it was "acting strange" it isn't acting anything because it isn't there.

posted on Mar, 29 2018 @ 11:16 AM
link
it is an interesting one to be observed, kind of makes MOND somewhat unlikely. Probably formed from discarded material during a galaxy merger... ie almost like what is observed in matter distributions in the bullet cluster.

posted on Apr, 2 2018 @ 08:26 AM
link
If we assume that dark matter exists as a starting point then consider the possibility that this galaxy has had an interaction with an even bigger galaxy I wonder if it is possible that when this happens dark matter as well as stars themselves can be 'taken' from the smaller galaxy?
If I understand correctly (and I probably don't) dark matter only interacts gravitationally so would that mean that a 'heavier' galaxy could steal the dark matter along with stars from it's smaller cousin? This could explain both the lack of dark matter and stars 1/400th and 1/200th respectively in comparison to our own galaxy the Milky Way.
Is there a galaxy nearby to this one that may have had an interaction with it? If so I would be checking to see if gravitational lensing suggests it to have more dark matter than expected.

Would it be reasonable to assume that if dark matter can interact with gravity that it can interact with itself?
The meeting of two galaxies should then see a dark matter 'exchange' with the larger galaxy basically taking mass from the smaller one and what we are seeing now is a globular cluster stripped of it's mass (both visible matter & invisible dark matter) from an interaction with a much bigger galaxy.

It's too much for my head to be honest. I'll get my coat.

posted on Apr, 6 2018 @ 04:14 PM
link
Maybe it's time to consider that what is being detected is an indication of interactions with some kind of additional unseen dimensions. Since there's no way for us to observe such things directly.

Said with such certainty and yet doesn't address any of the actual physics behind dark matter.

Dark Matter can be a number of things and comes in a lot of different breeds theoretically and work fine with the Standard Model. 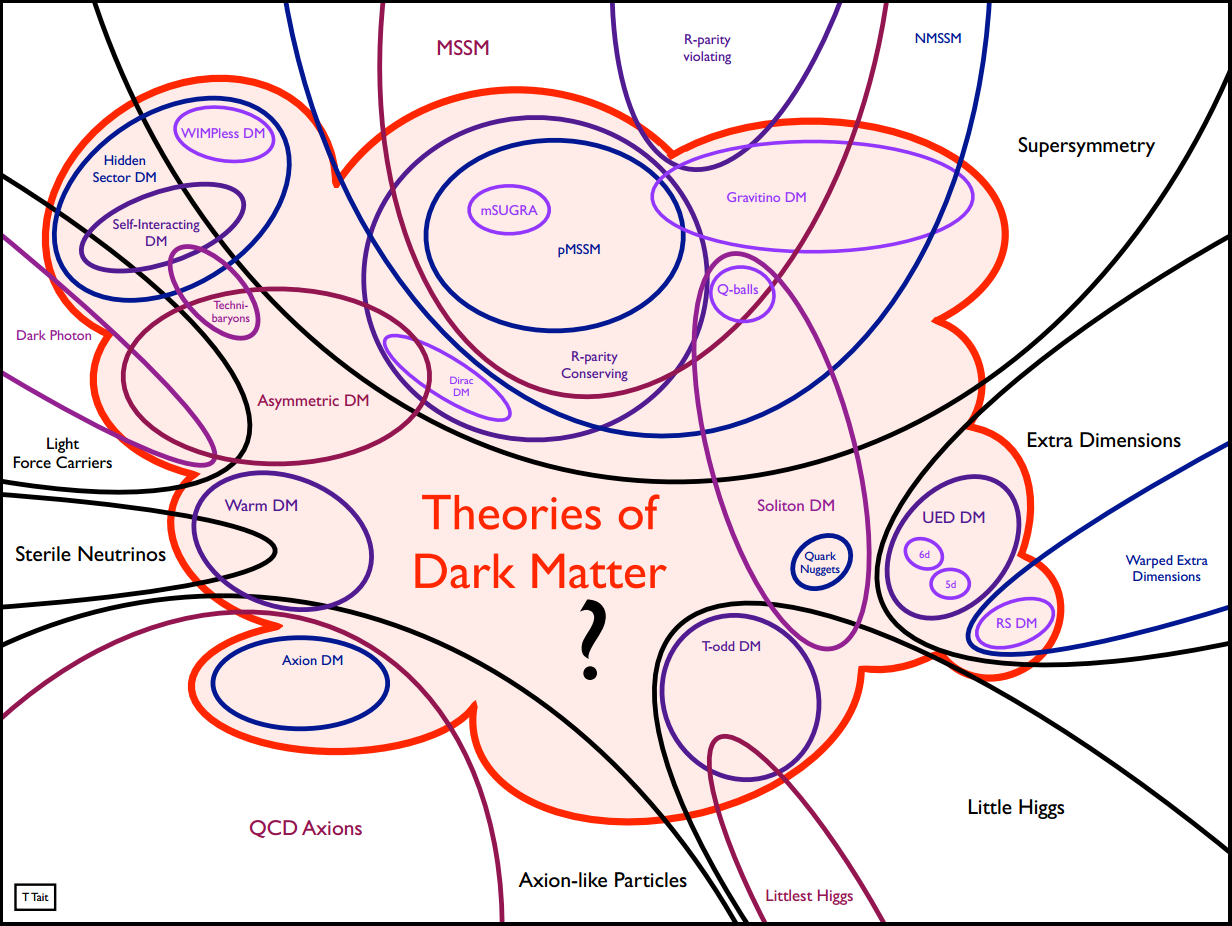 Point is the following
- It appears to be particular rather than a field effect
- It appears to have a gravitational coupling
- It clumps
- It is electromagnetically neutral
- We have no idea if it couples with the standard model, though it was somehow created,
- If it isn't an extra dimensional effect (again we have no strong evidence for extra dimensions) given it was created, then the coupling it might exhibit would be via the weak force only.

The two strongest candidates being WIMPs/supersymmetry (no its not ruled out) and Axion like dark matter.

There are currently 2 multi-ton scale dark matter experiments running right this moment and, im not sure how many axion searches, but i think its about 2 or 3.

So to say we have no way of detecting it is to ignore the possibilities that are out there before doing any form of investigation, and assuming something to be true with no evidence. Not only that but, did you know... science is already considering your stipulation, its been a postulate of theory for decades.