Nerve Agent Was On Front Door Of House.

Hang on. So who else has touched this door, without any ill effects having taken place.

Spy poisoning: Highest amount of nerve agent was on door

pretty much seals the deal the huh

Who touched the door that did not get sick? You have a link to something about it, or is that just speculation? Why do you think people touched that door or had reason to?

People don't normally walk around going up to peoples doors and touching them and I'm sure that they have that place cordoned off.

posted on Mar, 28 2018 @ 03:15 PM
link
Nothing about this story makes sense. How does one get exposed to a nerve agent at home, go out for a spot of lunch then fall into a catatonic state hours later?

Not buying the official line at all.

posted on Mar, 28 2018 @ 03:17 PM
link
Last week they were reporting that nerve agent had been found in their car's ventilation system.

Anyone who may have been visiting the house that day, friends, neighbours, delivery men etc, may have come into contact with the door. That was a hell of a risk to take whoever placed it there.

Loads of ways that could happen, remember it was freezing in the UK at the time so could have been wearing gloves and transferred to coat (or even to door handle) etc

Thought the advice was to wash anything contaminated with it as the stuff is unstable in water? How the hell are they still finding this stuff?
edit on 28-3-2018 by DrBobH because: (no reason given) 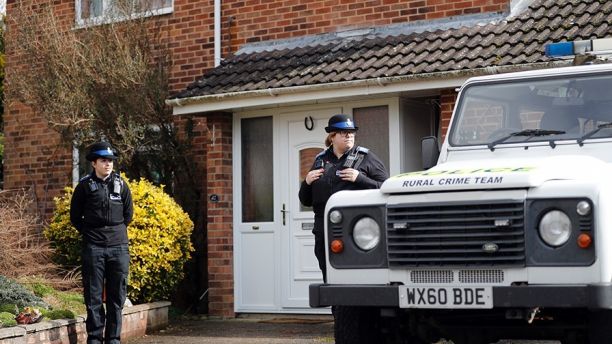 posted on Mar, 28 2018 @ 03:30 PM
link
I seem to recall it's possible the "nerve agent" is actually two components. One is on "......" (door, car, wherever) and the second is administered at another location. Only a person exposed to the combined components is affected. Minimises fallout and increases difficulty in investigating.

Also, just seen there's a second former KGB agent/double agent, Boris Karpichkov, saying he was warned by a senior FSB member that he, Skripal and 6 others were on a hit list and that "something bad" was going to happen to them. He claims this warning was issued on his birthday (12th Feb) but he didn't take it seriously.

More info (including the others on "the hit list") here:

Sorry, 'The Mirror' is a #ty paper (which ones aren't to be fair) but there's plenty of other sources.

Incidentally, I only came across this story as I was looking him up due to his connection to the Gareth Williams case (British spy who 'accidentally killed himself' by padlocking himself into a duffel bag)

originally posted by: alldaylong
a reply to: Blaine91555

That's an odd question. To open the door to get in our out.

It's not odd nobody touched it in that amount of time. We are not talking a house filled with kids that see's a lot of traffic or a party house where a steady stream of kids are in an out.

I guess I'm not sure why you think this?

originally posted by: Xcalibur254
a reply to: solarone

It's being widely reported in the MSM that the Skripals were poisoned at their own home.

I'm not buying it.


To open the door to get in our out

We would assume that the Nerve Agent was on the outside of the door ?

One thing is for certain, we dispelled numerous Russian officials from our countries in order to punish a country that has yet to be proven guilty.

starred for that one

The "but what about" technique we all tried to use on our parents when we were kids and did not realize the adults saw right through it.

Then you have no reason to think what you posted is true, other than you wish it to be true?

posted on Mar, 28 2018 @ 04:05 PM
link
Is it worth asking whyDetective Sergeant Blainewas working at street level on that day .


Then you have no reason to think what you posted is true, other than you wish it to be true?

Nothing should be taken as gospel. It's good to explore all angles.