page: 1
30
<<   2 >>
log in
join
share:
BotheLumberJack
+10 more
posted on Mar, 27 2018 @ 11:21 PM
link
Forgotten by most but not all. Crazy to think people used to get high and drunk watching nukes go off just outside their back yards and then cheer madly over it. Elvis was there (virtually unknown back then still). And the cool one liners, stars, comedians and the ordinary joe's mingling with their drinks at the escapade of it all.

One Word can describe these people .. NUTS .. It usually takes a few decades to see the big picture doesn't it. The Government back then told everyone it was a safe fun event, like drinking and smoking; Doctor knows best. Fun fun. Too bad they listened.

For 10 years, from around 1952–1963, atomic tourism was a big deal. Nuclear testing was taking place about 80 kilometers (50 mi) from Las Vegas, and civilian tourists would get as close to the blast as they could to throw all-night parties in sight of the mushroom cloud. What followed sounds an awful lot like the back story to the game Fallout: New Vegas.
knowledgenuts.com...
Whenever a bomb was dropped, there would be “Dawn Bomb Parties.” These started at midnight, Vegas crooners performing until 4:00 AM, when the party would stop for the partygoers to silently watch the flash and resulting mushroom cloud bloom on the horizon. Elvis even had one of his first gigs here around 1952. Of course he was a relative unknown, and he didn’t go over too well at the time. There was even a new drink created. It was called an “Atomic Cocktail.”


Even though the government was careful to make sure that the wind was blowing in such a way as to blow away any fallout, people as far away as Utah reported that their animals and livestock were getting sick.


Over 41 years, the federal government detonated 921 nuclear warheads underground at the Nevada Test Site, 75 miles northeast of Las Vegas. Each explosion deposited a toxic load of radioactivity into the ground and, in some cases, directly into aquifers.

I thought you mean't BONG parties.

Yeah bong parties, but these came with an Atomic Bang. 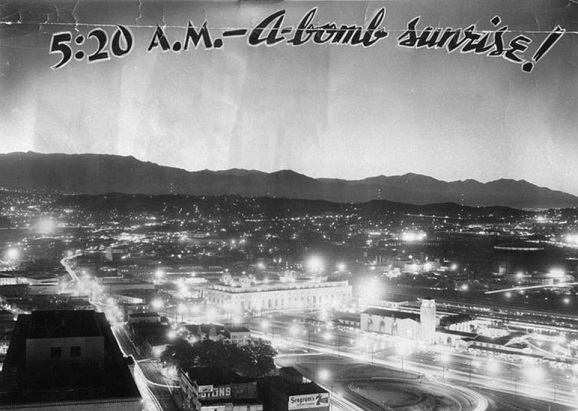 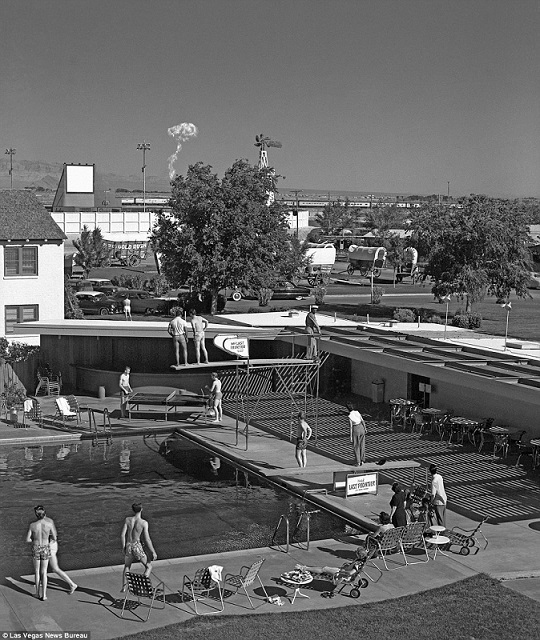 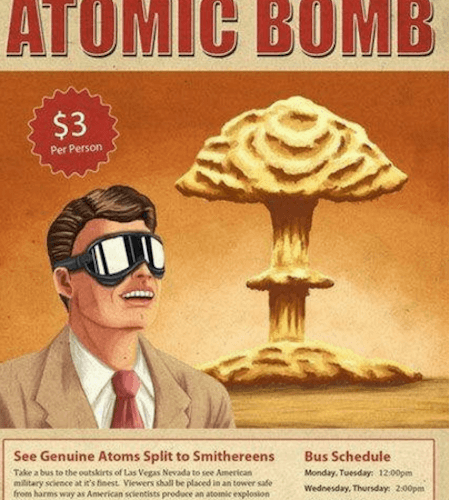 Before Las Vegas was Sin City, it was Atomic City.


Think of it as people going to watch fireworks go off during the 4th of July or new years. I watched a MoAB get dropped and it was amazing, and even outside of seeing that in person. Ask yourself how many times did you watch the video's
or the meteor flying into Russia, or that weapons depot going off in the Ukraine? People just like seeing things go boom, and hey if a party with booze and what-nots are included, then all the better.

Yeah, but watching meteors aren't quite the same as watching an atomic bomb blow just outside of town. The Government knew it wasn't safe and did it anyway. People weren't educated enough, and were told nothing about safety or they wouldnt have enjoyed it so much.

If only he'd made a song about it.

Nice one! It's kind of obvious we'd be partying at A-bomb tests now I know about it. Any excuse and someone, somewhere is calling it a 'theme party.' I didn't know until your OP so thanks. 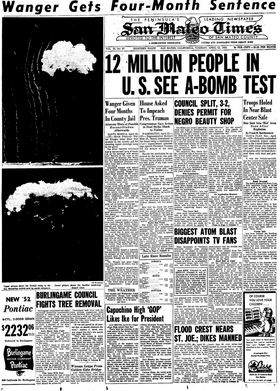 It sounds good in a nostalgic way. Fill the car with a bunch of friends, turn the radio up and drive out to a viewpoint to watch a test go off. Maybe catch a saucer sighting?! Drive back to Vegas swigging JD to get screwed over by gangsters and watch Dean Martin in the casino.

originally posted by: Raggedyman
I wouldn't mind seeing a nuke detonate from a distance
Probably will one day, soon

Yeah and I bet when residents reported their animals getting sick they were ridiculed and chastised for questioning the official narrative.

You're OK in Oz. You could watch one from miles away and walk away with a selfie.

England's so small that to see one would probably be the last thing you ever saw. I'm NW England too where we have a handful of sites on the 'hit with nukes' list of enemy nations. We could potentially 'see' 2-3 going up on different horizons. Early fireworks night lol.

We'll help you out anytime, no worries there cobba.

Thanks for the Fallout btw.....put a new meaning to the "Ashes" cricket tests.

Ach jeez, we did do that, yes. Thanks mate!! It's funny how the 50s are seen as a 'time of innocence' and were actually pretty #ty to most of the planet.

...knowing all that and I still love the decade.

They even cleaned up the mess afterwards..well, kinda.

From 1946 to 1958 67 nuclear tests were done there . All the nuclear waste was shoved under "the dome" which is going to be under water soon and was only supposed to be a temporary fix...but we never came up with a permanent solution.

If only he'd made a song about it.

He didn't but these guys did -

originally posted by: Kandinsky
a reply to: BotheLumberJack

Nice one! It's kind of obvious we'd be partying at A-bomb tests now I know about it. Any excuse and someone, somewhere is calling it a 'theme party.' I didn't know until your OP so thanks.

It sounds good in a nostalgic way. Fill the car with a bunch of friends, turn the radio up and drive out to a viewpoint to watch a test go off. Maybe catch a saucer sighting?! Drive back to Vegas swigging JD to get screwed over by gangsters and watch Dean Martin in the casino.

lol the visuals I just had of that! Sounds like really bad 50's oneliner B Flick!
edit on 28-3-2018 by BotheLumberJack because: (no reason given)