A Martian Oddity Photographed by Curiosity on Sol 1185

page: 1
63
<<   2  3 >>
log in
join
share:
jeep3r
+33 more
posted on Mar, 26 2018 @ 11:43 AM
link
While watching a Youtube video compilation of Mars images acquired by MSL/Curiosity, a rather unusual feature caught my attention. On day 1185 of its mission, the rover captured an image of a pretty distinct looking elliptical feature that sticks out like a sore thumb among the usual rocks we normally see in images from Mars. Here's a snapshot of the feature in question:

As there are two images available, left and right, we can also create a 3D stereo view. To see the 3D effect below, please focus on the black bar in the center then slowly cross your eyes/move eyes inward until you see a third image appear in the center (this will be the composite 3D image that your brain automatically creates from the two single images).

3D Cross Eye View
(see instructions above for how to view correctly):

The scale of the feature must be in the centimeter range (maximum) since the image had been acquired by Curiosity's MastCam which was pointed at the surface terrain close to the rover (I would estimate the distance between MastCam and the imaged area to be 3-4 meters).

The way it looks, it made me think it might be debris from the Sky Crane that delivered MSL to the surface and then crashed some distance away from the landing site. But then again, it probably wouldn't appear as dust-covered as the other rocks around it, but who knows. Of course it could also be some rare form of natural erosion or the result of geochemical processes.

But if it's none of the above, then we're talking "fossils". In that case, there's not much we can compare it to based on what we know from Earth. One organism that did leave behind similarly shaped traces in our Earthly fossil record is called Eldonia, an ordovician soft-bodied cambroernid animal that existed about 450 million years ago. 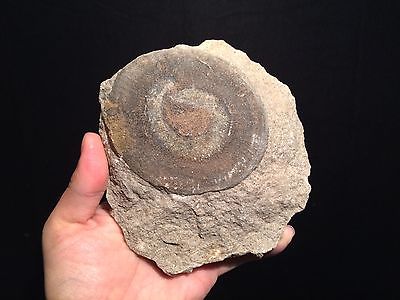 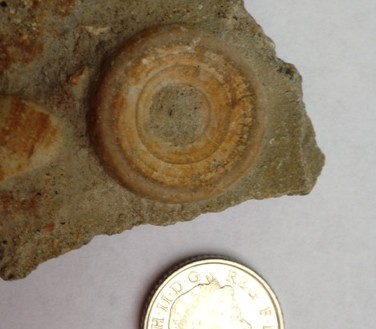 And here's a collection of Ordovician bryozoan fossils, the one to the right looks like it could be a good fit: 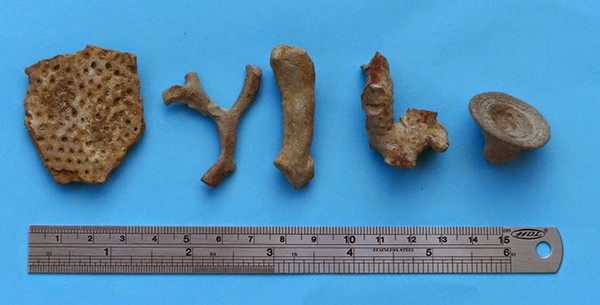 For some it may be a stretch to think this could actually be a fossil, especially since a frequent argument says that fossils are usually embedded in entire ecosystems, so there should be a lot more of them in that same area. Does anyone know if this feature had already been positively identified anywhere? Would be great to find out what others on here think of this...


I think I see it: it's what looks like a smooth, rounded pebble, such as you might find in a stream bed or at the shore. It's distinctly different from every other rock in the picture.

Also another of different material that looks like a ball, just above the indicator box and little right of center. This ball shaped object and the one in the lower right corner seem to look like the same material.

ETA: The small ball shaped object (above, right of center of indicator box) looks to be about the same size as the hole in the primary object. It looks almost like it would fit together as a joint of some kind. If the ball is flat on the bottom (which we can't see), the oval piece in the lower right corner could fit on top making something like a ball joint (I know it's a stretch). I wonder if there are other pieces laying around?

posted on Mar, 26 2018 @ 12:08 PM
link
The object looks quite cup-shaped, especially in the 3-D view. On the idea of it being a fossil: Being the only one in view is not necessarily a problem. It might simply be the only one in the camera's field of view, or the only one that happened to be exposed, at the moment, due to wind-shifted dust.

Could be something merely geological, too. Something like an eroded spherical concretion, or a geode. Both are fairly common on Earth.

For those unaccustomed to using 3-D pairs of images: It's easiest to get the 3-D effect, with one's eyes fairly near the screen.

Thanks, mate! Regarding the ball in cup game, I didn't want to go as far as to imply an entire civilization once thrived on Mars. At least not with this thread!

originally posted by: jeep3r
a reply to: Gargoyle91

LOL. I know what it is! It's a fossilized cadbury egg! The primary object is one side, the secondary (lower right) object is the other side and the tertiary object (ball) is the creamy yoke center! ;-) 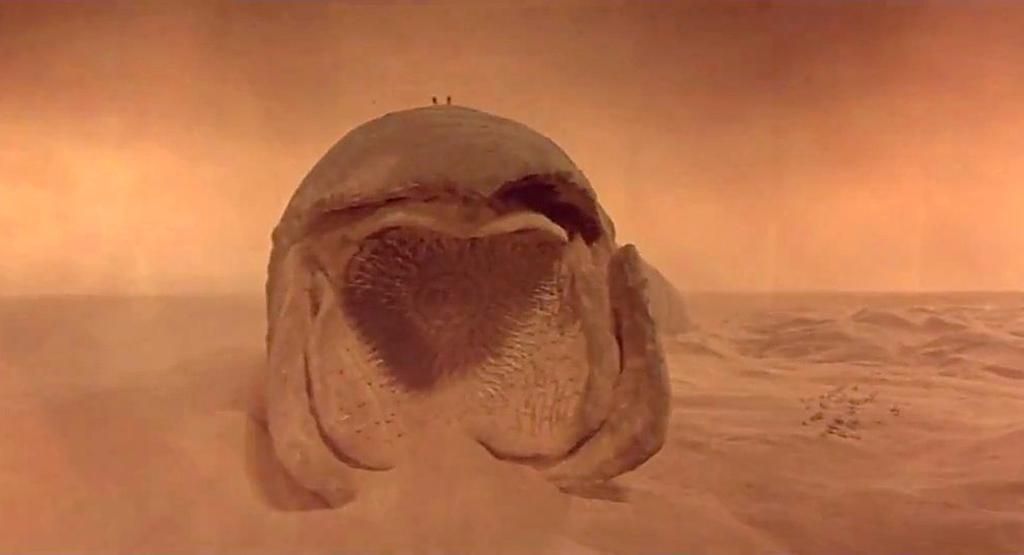 posted on Mar, 26 2018 @ 12:36 PM
link
Before we get too excited about the prospect of Martian hip joints, I'm thinking this is probably pieces of something that fell off the lander. It seems to be very clearly artificial, and the most likely source for such a thing is, sadly, the Mars probe itself.

originally posted by: AndyFromMichigan
Before we get too excited about the prospect of Martian hip joints, I'm thinking this is probably pieces of something that fell off the lander. It seems to be very clearly artificial, and the most likely source for such a thing is, sadly, the Mars probe itself.

Martian hip joints would be cool! As mentioned, I was also thinking that it might be debris from the sky crane.

In that case they would have probably investigated it more in detail, just as they did when a plastic piece fell off the rover some sols back.

The disc-shaped feature in the OP would have made a great target for the MAHLI hand lens imager, but unfortunately they didn't take a closer look.

originally posted by: wildespace
I'm pretty sure the spheres are "blueberries". The main object in question looks like a hollow concretion that got broken in two.


Yeah, there are a lot of those lying around, actually. When I was looking more diligently, I tried to look more for spirals or some other shape that would be more difficult to have formed without the delicate touch of life.

There are odd shapes all over the place, however, it's pretty hard to say if they're fossils. Here's one from the other day, Sol 1996.