More than 130 whales die in mass stranding in Western Australia 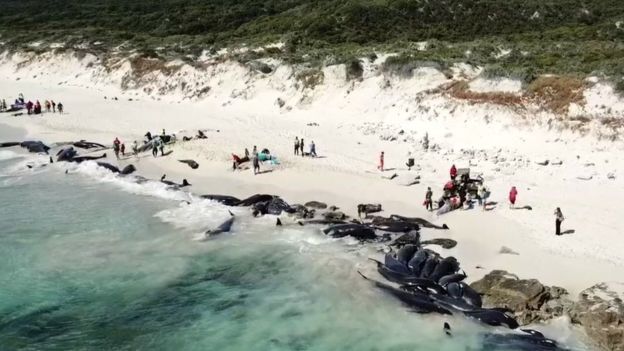 A rescue operation began on Friday morning in Hamelin Bay, on the state’s south-western tip, to save the remaining 15, with volunteers and vets trying to keep the surviving short-finned pilot whales alive before deciding when to herd them out to sea. One witness described trying to steer one of the animals out to sea, only to watch it beach itself again.

Most died from what i gather.

Reports say that they would just swim back onto the land.

Did You Know? The longest known dive of a short-finned pilot whale lasted 15 minutes. They are the second largest species in the dolphin family after killer whales. Pilot whales are often involved in mass "strandings" for reasons that are still unclear.

this isnt the first time this has happened either. pretty sure that its something that happens almost every year or every few years

That is what i was seeing in the write ups too.

Apparently this is the 2nd largest group to die on record but the species is prone to beaching themselves.

It was all the rave before 2012 and leading up.

posted on Mar, 25 2018 @ 03:28 PM
link
taken that this isn't the first time have they figured why they do that ? i mean its too many of them and its not coincidental, we need to know why

Maybe they had their own Jim Jones type lead bull whale, and they drank the koolaid.

Who is anyone to criticize their culture?

The whales often migrate north then east through the Bass straits, the underwater signature is similar with the shelf as they approach the much shallower strait.

ok but why do they not have the ability at that time to change direction after they get drug back out to sea?

it is as if they get brainwashed with a set of directions and all other senses turned off.

now what in nature would require such?

I say electric universe and a battery just died and they no longer have source to live.
edit on 25-3-2018 by howtonhawky because: (no reason given)

posted on Mar, 25 2018 @ 03:57 PM
link
It happened near this time last year in New Zealand, hundreds died, while as many or more were saved by people forming chains.

gaurdian
Here is a link to what you refer.

Apparently this time it was over 400 whales but the reporting is spotty.
edit on 25-3-2018 by howtonhawky because: (no reason given)

Whale brains are 5 times the size of humans but they live in a sonic resonant described world underwater.
Maybe humans just can't assimilate?

posted on Mar, 25 2018 @ 05:19 PM
link
I always keep an eye out for pilot whales beaching themselves. Last time I remember such a huge amount doing this was the week before Fukushima. I watched closely then as I suspected an eartquake was imminent....and as we know it was....
No science behind it, just seems to be a pattern....

originally posted by: angelchemuel
I always keep an eye out for pilot whales beaching themselves. Last time I remember such a huge amount doing this was the week before Fukushima. I watched closely then as I suspected an eartquake was imminent....and as we know it was....
No science behind it, just seems to be a pattern....

It does seem to be a pattern, but in relation to what?

There have been suggestions, like submarine sonar, or maybe surface vessels sonar, or even their sounds and motions in the water, certainly that would be a pattern..perhaps in a similar way heavy diesel, or powerful engines can set off car alarms.
Then I thought one time that maybe their behaviour would be similar to the Orcas, who near beach themselves trying to pluck seals off the waters edge, then I read somewhere that Pilots actually obstruct the Orcas from doing that....to protect the seals was the given. It's hard for anyone to know.

I'd be interested in knowing if there was any military games involving submarines in the area.

The sonar from them is one suspected cause of them beaching.

originally posted by: Plotus
Sounds like they were trying to get out of an irritant or toxin ? The oceans will be the next victim to die.


Hamelin Bay is south of where I live and I have been many times to stay, this beach is one of the most cleanest and pristine on the west facing side of WA. The last time this happened I recall that there were beachings in Tasmania..then a few days later in South Australia and then again here in WA at Augusta a few Km's away from Hamelin Bay. The rumor going around was that it was a Russian Sub traversing the southern part of Australia that spooked them.

Speculation is that they get disoriented and they hear the distress calls of the still stranded members of the pod and go back to them, so they keep rebeaching.

Speculation is that they get disoriented and they hear the distress calls of the still stranded members of the pod and go back to them, so they keep rebeaching.


Lot's of speculation for sure. I've read everything from changing ocean temps, to shifting underwater currents, to sonar, breeding, etc...

The one thing is for sure, they attempt to beach themselves again typically, so it's something instinctual.

If only whales could talk...o wait! If only we could understand them hehe

The big question is what gets them started. My speculation is to why they keep going back once freed.

originally posted by: ketsuko
a reply to: Vector99
My speculation is to why they keep going back once freed.


Most likely it's instinct.

Whales are smart, but not to the level that instinct won't drive them to death.

My money is on these whales missing their mating spot but thinking they are there.

What causes that? Probably us.