Bend Over And Smile America.

if obama sign that illustrious bill, obama would be to blame. but trump signed this tripe and its not the 'dems' fault or philistine repubs... blame the man who put his John Hancock and made it into law.

i would not have been impartial to hearing the entire 2k+ pages read poorly by one of our members of the senate.

at least some people saw upwards to +150$ on their tax returns...


Uneducated much? The tax bill will affect NEXT years tax returns.

Trump signed it and yes that is on him, but given the track record of presidents 'signing' things without knowing about them is par for the course.

What worries me is this shows just how much power congress actually has.

Trump didn't write this bill, congress did, and congress voted yes on it delivering it to the presidents doorstep.

Our congressional representatives are the issue.

But the cowardly republicans are just as bad because they wrote it.

posted on Mar, 23 2018 @ 08:25 PM
link
Wars are expensive. The neocons are doing a happy dance, the good ole boys over at Halliburton are giving each other high fives about now and celebrating with Charles Heidsieck Brut Reserve and fat lines of covfefe....

I've lost faith in our legislatures a long time ago. They're all self-serving in my opinion. All they care about is protecting their jobs, reaping government benefits and increasing their already over-paid salaries. They spend more time on political infighting than doing the job American's elected them to do. Term limits will never happen because they have to vote for it. They vote for their own raises why would they vote for losing their job after a couple of terms?

It's why I've always said legislatures who deal with issues that are a conflict of interest, and other issues that affect the majority of Americans, should be voted directly by the taxpayers at the voting booth! Sometimes I wonder if we really need that many representatives in congress today! Our representatives continue to ignore the citizens of this country when it comes to healthcare, the high costs of prescriptions and elderly care, over-bearing taxation, corporations taking advantage of consumers, privacy rights, the high cost of education...just to name a few.

Let the American people directly vote for these issues and let the legislatures deal with implementing them! It really comes down to the fact that millionaire politicians can never relate the majority of struggling Americans!

posted on Mar, 23 2018 @ 08:29 PM
link
Most everyone on ATS and communities around America will get emotionally whipped-up as the next be election approaches...WHY?

Call Stormy and ask her if he at least respected her in the morning.

originally posted by: carewemust
Most everyone on ATS and communities around America will get emotionally whipped-up as the next be election approaches...WHY?

No. I don't believe the Republicans.

But I DO believe the Democrats, and that's the hell of it.

posted on Mar, 23 2018 @ 08:38 PM
link
For those who don't understand the limitation put on Trump's agenda by having less than 60 Conservative votes in the Senate.


From POTUS Trump perspective the lack of “choice” stems from a cornerstone that Making America Great Again is dependent on a strong U.S. military. Protecting Americans writ large is contingent upon ensuring our military is solid. Unfortunately, the only way to ensure the #1 objective was to acquiesce/concede to the blackmail of the UniParty in DC. – FUBAR.

Now...those who are unhappy about how DEMOCRACY operates, should work like hell to get a super-majority for your chosen party in the House and Senate. Guess where complaining will take you? (Hint: Look at the Democrats.)

There ya go! It's known as the "Sheeple" syndrome. Remember John Gruber? He was Obama's advisor on communicating ObamaCare to the public. He told the President that Americans are STUPID. They will believe what you tell them without thinking about it. So Obama made wonderful promises that turned out to be lies. Gruber was right!


There was so much pork in the bill that muslims left Washington!


The House majority party writes the check, the president only signs it.

Trump should have never had signed it.


But they paid for a study on yak herding in China. That's more important than your basement repairs, don'cha think.

If the United States must be in charge of providing order in the world, then its sovereign is above the law.
Here lie the roots of so-called American exceptionalism.

I don't think you understand what that concept actually means.

posted on Mar, 23 2018 @ 08:58 PM
link
Some of us got the memo long time ago, thats why a guy like Ron Paul will never become a president, but a billionaire who is a darling of deep state will. 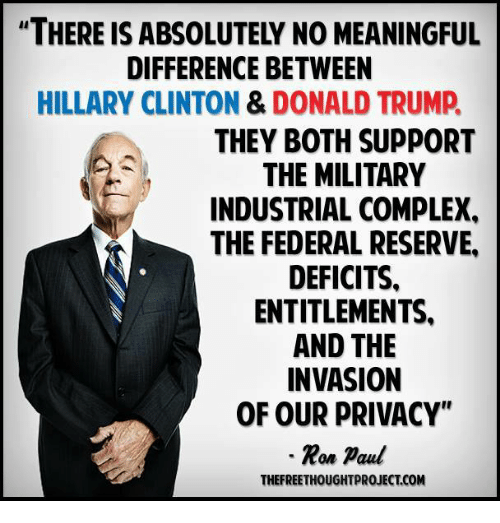 Hell, Trump even got taxes lowered and ended the Obamacare mandate.

But I will never be timid when I see douchebag behavior in the people elected to be our representatives.