Guccifer 2.0 Revealed to Be Russian Intelligence

But on one occasion, The Daily Beast has learned, Guccifer failed to activate the VPN client before logging on. As a result, he left a real, Moscow-based Internet Protocol address in the server logs of an American social media company, according to a source familiar with the government’s Guccifer investigation.

EXCLUSIVE: ‘Lone DNC Hacker’ Guccifer 2.0 Slipped Up and Revealed He Was a Russian Intelligence Officer

oh my goodness. well doesn't that just turn the 'no russia no russia you're the russia' narrative right on its ear.

do you think trump will understand this well enough to tweet about it?

according to a source familiar with the government’s Guccifer investigation

Wow, haven't we heard that typical line before...

Robert Mueller, has taken over the probe into Guccifer and brought the FBI agents who worked to track the persona onto his team.

Well, Consider the FBI's past corruption, lies, leaks and agents being dismissed as totally biased.. I wouldnt put much weight into this!

I'll say it again... I dont care who leaks the truth about corrupt politicians... The fact that they are corrupt is what needs to be investigated.. not who exposed them!


They did NOT just pull the article i linked did they??

Now I cant access my history to find the original link text.

I see your Daily Beast article and raise you a Wired article:

One nugget of particular interest to Trump supporters: a section titled "Umbrage" that details the CIA's ability to impersonate cyber-attack techniques used by Russia and other nation states.

Didn't we already know Russia meddled in the election both ways?

The DNC used Russian intelligence that they paid for.... But it isn't an issue because they lost.

Had they won we'd be just as divided having the same conversation.

That was their angle.

They would have known this long ago and brought it out long ago.

The DNC would have made this big NEWS.

They've known all about "The Gucc" for a long time already 😁 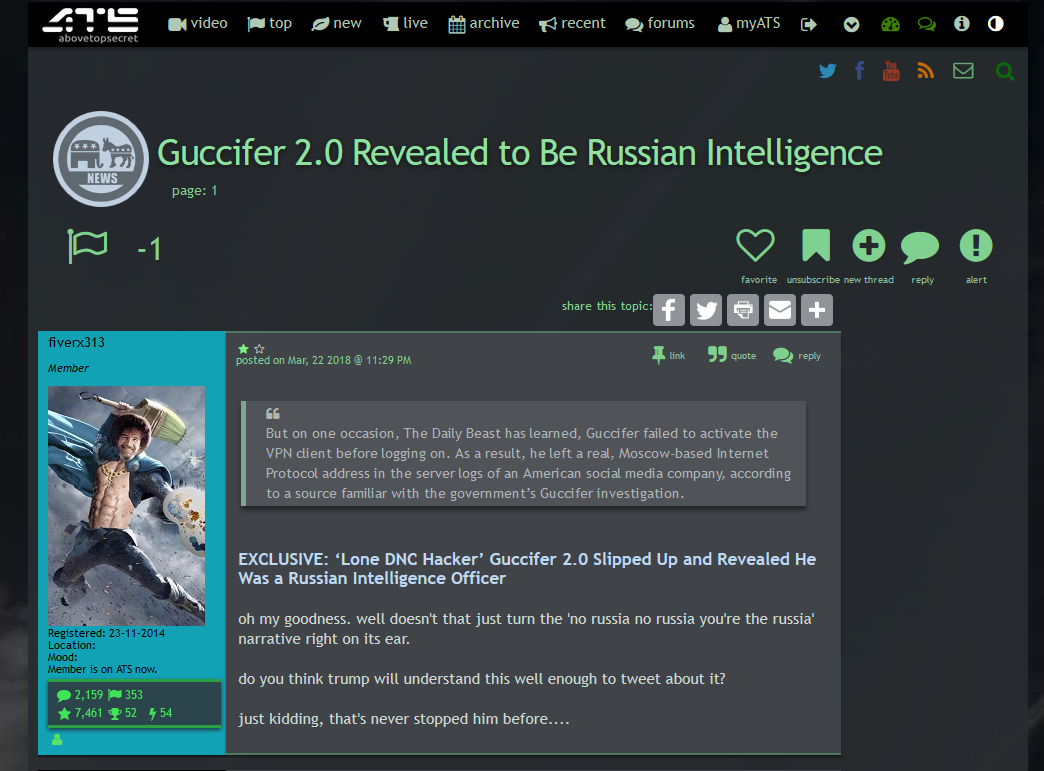 I really thought this had been debunked a year ago as someone releasing 3-4 doc's with a fake russia attribution based on documents showing time changes. Wikileaks published a couple days later. It was discussed here and across multiple forums and in some articles.

Interesting it comes up now that every media outlet seems to be piling on. Truth, will prevail regardless the outcome.

posted on Mar, 22 2018 @ 11:18 PM
link
Trumps in trouble now.
Goosetefer is Russian
Both trumps, father and son have had sexual affairs,

Maybe if they had sex with other men like Obama did, we could forgive him.

xenon129
+2 more
posted on Mar, 22 2018 @ 11:18 PM
link
The DNC hack was a leak, and everyone knows it. How obvious does it have to get? A guy gets caught logging on to different Democrats computers and moved data. The same guy had access to Debbie Wasserman Schutlz computers and could have downloaded all the info that was sent to wikileaks. The DNC refused to turn over their servers and DWS threatened a police office over a cpu that they had as evidence. Then the guy that we know illegally downloaded info from members of congress and could have easily leaked the DNC info if he wanted to, tries to flee the country. But nope, nothing to see here. It was Russia even though the data was downloaded at 186 mbps and they couldn't have done it remotely.

There is a way to flag once and then "unflag" twice. I did it one time unwittingly to someone. I didnt want to figure out how, so I just gave the one flag back that I could and left it alone.

I assume its a small bug.

Gucifer 2.0 has long been doubted for their authenticity. Many have also long thought that he /she /them, is just a US or NATO based state sponsored hacker group using one alias.

The hack by gucifer CAME AFTER the DNC leak and was limited to emails not even from the DNC at all. Those "leaks" were not entire internal files with attachments as was the case with the Seth Rich /wiki leaks from the DNC.

Also the official story of a "slip up" by the hacker is absurd. Let me get it straight, they were using a VPN and forgot to tick a user interface setting? Really? Who is stuck in the 90s and still finds this story as plausible for an elite level, world class hacker?

posted on Mar, 23 2018 @ 12:31 AM
link
This is great news. Any thing thats slows the world from entering WW3 cannot be a bad thing - unless you receive bribes and commissions from the MIC peddling death under the guise of spreading democracy

You don't forget to turn on your VPN...


That forensic determination has substantial implications for the criminal probe into potential collusion between President Donald Trump and Russia.

These apparent 'substantial' implications turn out to be Roger Stone sending Guccifer 2.0 a tweet. Of course, for these kinds of covert operations, Twitter is always a good option.

LOL Gruccifer 2.0 is not Russian. Gruccifer 2.0 is a Western agent used to set-up other countries. His cover has already been blown over a year ago because the documents he used was registered to the Washington DC as an IT user. So everyone knew he was a phony and fraud for the longest time. Where have u been? Looks like they brought him back from the dead to frame Russia.

It's like when secureteam uploads a new UFO video.

I'm not eating that burger. But love the entertainment value. So, good thread

I really thought you were on about Grambler being Guccifer for a second.