My Claim for the Crown.

trinity of almighty god i am
the creator of the universe

please explain , why , when i made up this following sentence.

"The Knives In The Back Cant Be Twisted But The Knife In The Chest Would Take Heart With It."

and jesus answered him, simon, i have something to say to you and he replied, say it, teacher
accept yahusha as mashiyach and trust yahuah and keep commandment you will be saved that is all


if the heavenly father cannot live his life then there is no reason for earth to exist
they were going to slay me like a lamb until i woke up, now its my turn to slay
even my own family members are exalting satan over me and condoning me being tortured
gematria reveals the intentions of various programmers in the spirit world

Im going to feature the regal left hand of the triple 8, with a screen shot and quote from this thread.

im going to claim that no other name who has ever lived, is alive , or will live has the identical Values in the hebrew , greek , and english gematria at the same time as "anthony emilio Belcastro III" which is my name and that noone can prove me wrong until they find a name that has all 3 of the same matching numerical values.

I will also claim, that the mathematical probabilities of all of them combined, each and every gematria value i have Equaling what they say will be unable to comprehend, and that noone will be able to Calculate the odds of that happening forever and ever.

I will also claim, Noone will ever be able to mathematically prove that the numerical values of the gematria values i present ,and that the names and titles i present are not of equal value amongst themselves , from numbers to numbers , and titles to titles.

i will make the claim that noone will ever be able to prove any of my claims wrong in that particular thread.

originally posted by: Belcastro
panic disorder caused by ( yours is caused by me)
The divine madness (The truth within yourself)


So now, I'm responsible for naming you Anthony Emilio Belcastro Iii? Go ahead, continue to believe in silly numbers interpretation. This only prove you can point out anything to suit your "divine madness"

originally posted by: Belcastro
psychopathic spirit ( Nothing wrong with that if your god)


I wouldn't throw random numbers and meaningless word in a forum like a psychopathic spirit if I'm god.


originally posted by: Belcastro
Utter of Satans name Allah aka sin ( How many times i have said satan is allah in this thread?)


Ironically, it's also attached to your name. Are you admitting you are named after Satan?

have you never heard of raising the serpent kundalini meditation, which is why the pope carries a staff with a pinecone on it " may your eye be single and your body full of light."

originally posted by: Belcastro
Anthony Emilio Belcastro Iii
Fallen souls are blind to logic (yes you are these gematria values are talking to you)


So you are named Anthony Emilio Belcastro Iii just to point out gematrially that I'm one of the fallen souls. Lol! Your parents must have very far insight as to who I am. This make me sound like an angel.

How about you stop being ridiculous for awhile?

originally posted by: Belcastro
Cult leader who thinks is god ( This is true)
the dude acts demon possessed ( i have claimed i nthis thread to have been possesed by lucifer which is why they falsey diagnose )


So you accept this as true with regards to yourself, but throw ones you don't like to other people?

originally posted by: Belcastro
Arrogant meddling christins (gibberish , unless you mean i am meddling with your plans)


No I mean you are an arrogant "god" who meddles with Christians faith with your serpent's talk.

These are the same as above


That is why you only need Jewish and English Equals for comparison.

If it were true that i did not know the name of Every person,
why would the bible say,

AS IT IS WRITTEN,

The gatekeeper opens the gate for him, and the sheep listen to his voice. He calls his own sheep by name and leads them out.

IF as you claim , I do not know the name of every person,
Then why would i issue a challenge to find another name with the values of gematria as mine which cannot be done in a total of four gematria values that equal my name which equal to " The monarch of heaven " " I am that i am the lord your god." and " the Word Became Flesh". and i disagree, i typed my name into that greek gematria in english, and i received an english name of God.


So you claim to know ALL names?

What is the name of my pet?

originally posted by: Belcastro
this entire conversation is a waste of your time, because i swear noone will ever, forever and ever, be able to find another name that numerical value equal to my name, which is anthony emilio belcastro III into the four gematria Tables as all English language.


It's a waste of time because you keep making illogical irrelevant excuses and denials. For example, your name gematria equals is irrelevant to me or anyone else.

originally posted by: Belcastro
I promise you this. i promise all of you this.


No need. Just rest yourself.

originally posted by: Belcastro
If you dont come back for 6 or 7 hours,
Why bother coming back? plug your phone in it will charge at the same time you use it.
otherwise go ahead and go with your tail between your legs.


Because I need to sleep? If you are a "god" how can you are seriously Not-so-Omniscient as you claim you are?


originally posted by: Belcastro
you cant say the stuff you say and then duck out,
It makes you look weak when you say " my battery wahhh" when everyone who has a mobile device has a mobile charger,
so that excuse is a sad one.


Everyone can't response and recharge while they are sleeping, can they? Seriously you need to work on your logic. Your logic is a flaw as the gematria.

originally posted by: Belcastro
and if it were true that you were on a mobile phone,
explain how for so long and how you have replied so fast to the thread?


As long as I wanted. There is no timely obligation whatsoever for me to post. I post according to my leisure. Not yours.

originally posted by: Belcastro
and typed so much in such a short time in response to my posts previously in the thread.
please look at the timestamps of Easternshadow's Posts in comparison to mine.
ive been doing this for days, so what does that tell you?


I thought I'm the slowest to response, considering I always do fact checking and quick spell checking before posting. It took me over an hour to complete this post while eating and drinking.
edit on 18-3-2018 by EasternShadow because: (no reason given)


So why did you not use the determiner 'The' before that sentence, but chose to use it for :


Seems like you chose the words in order to make it fit your made up numerology nonsense. 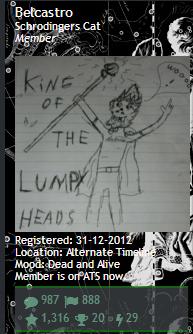 
You challenge the entire universe to prove your claims wrong?


That is at the bottom of the linked site with links to godlikeprod. seriously?


All this is coming from a recent head injury maybe?


Your claims are proven wrong simply because the one making the claims (YOU) doesn't understand what they are asking.

i personally own this book from my childhood and when i tried to explain what i thought it was some people looked at me like im crazy and others were fascinated.


Is this childrens book evidence of the mandella effect?


almost as good evidence as the changing of weather from day to day is for the Mandela effect.


Any dizziness or nausea?


Nope. You won't answer any of the questions I asked you about why you hand-craft the sentences to fit your narrative.

Which I assume you won't because they would prove everything you are claiming is entirely fictitious.

If this is how you spend your days then I feel really sad for you.

You're still at it? Do you seriously not know the difference between a meteor and an earthquake? Or is the Michigan link just one more proof for us how confused you are?

Confused 398
it's all pride
disheartening
rest in peace