During the 2012 autumn excavation season at Göbekli Tepe, a small figurine (5,1×2,3×2,7 cm) was handed in as a surface find from the north-western hilltop of the tell . The motif of the figurine is an ithyphallic person sitting with legs dragged toward his body on an unidentifiable object. He is looking up and grasping his legs. Between the legs, a large erect phallus is depicted , and a quadruped animal is sitting on the person´s left shoulder (Fig. 4). As one half of the figurine has a thick layer of sinter, the question whether there originally was another animal on the other shoulder remains open. The animal species cannot be determined with security neither, but the general form is consistent with depictions of large wildcats or bears at Göbekli Tepe . The material of the sculpture is unusual for the site on the other hand. Nearly all sculptures and figurines so far known from Göbekli Tepe were made from local limestone. The new figurine is most likely made from nephrite 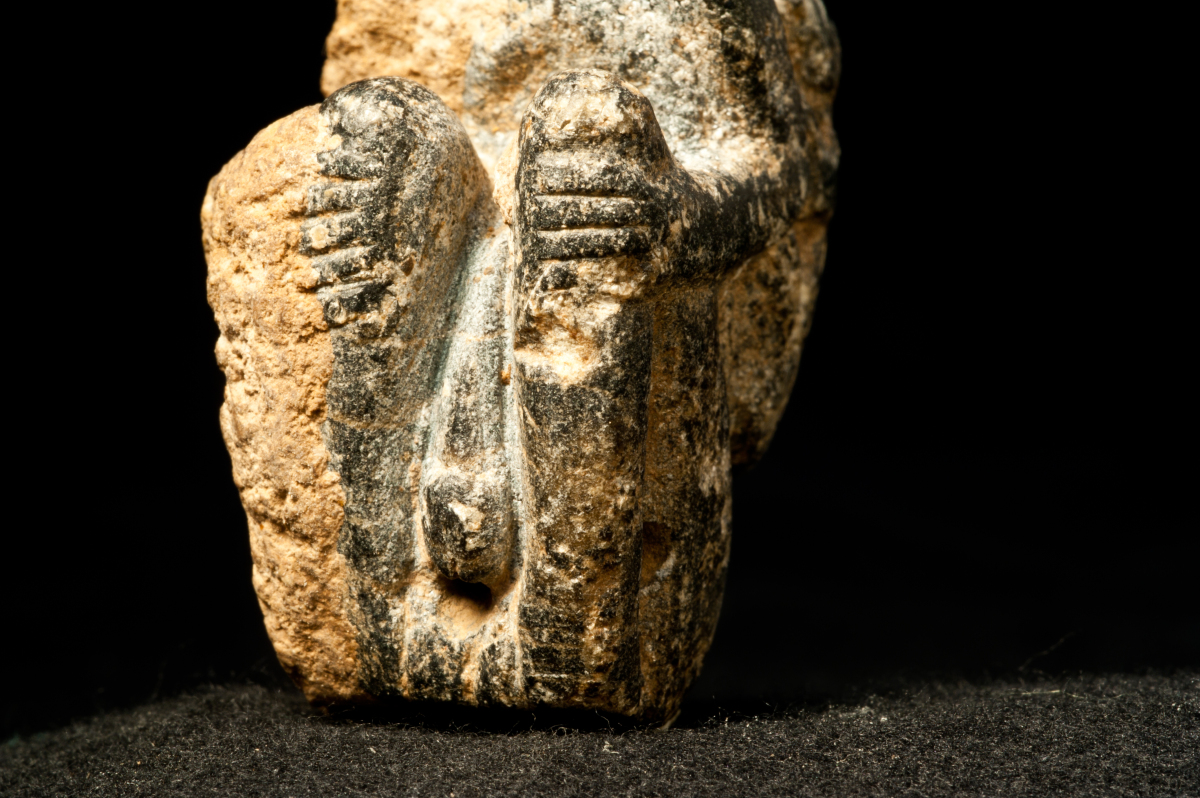 The description fails to mention that the figure is wearing a mask the same as seen in Vinca figurines of the Balkans from the probably slightly later period, and also that he was perhaps not of this Earth, they do however describe it as ithyphallic, which is highly unlikely given the correspondences to Vinca figurines which never are. 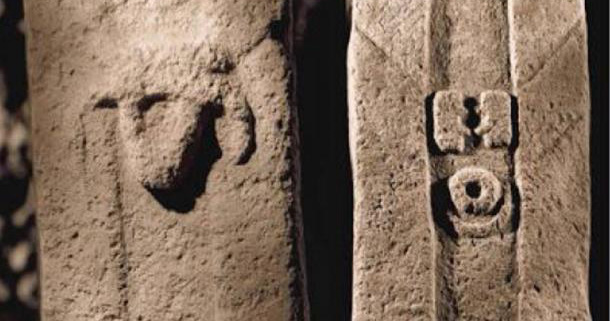 The person is clearly sat upon or within a device or throne and what has been taken as the end of his would be phallus is more likely an H motif upon that support, there is also a circle and crescent seen beneath this and the same symbolic sequence can be seen elsewhere at Gobekli Teoe, were the H motif is based upon two figures shaking hands, the circle beneath perhaps the hole that one of them appeared out of, but anyway to see that as a phallus requires exposure to the modern artistic convention of foreshortening and over exposure to Freudian conditioning. 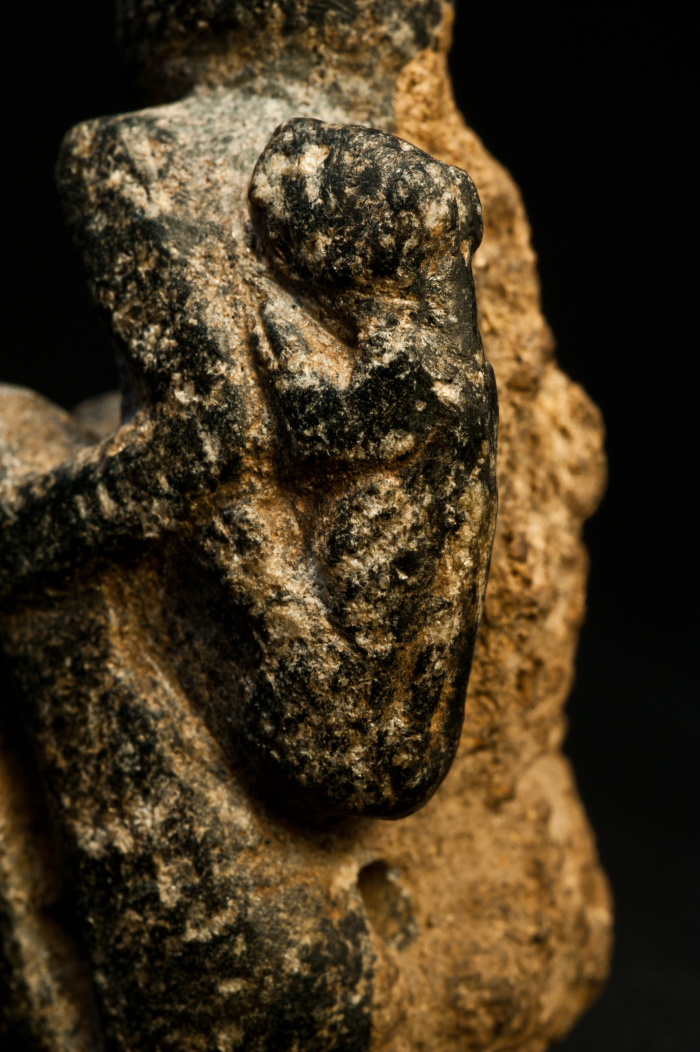 There is a creature upon his shoulder, perhaps on the other also beneath the limestone concretion typical of Gobekli Tepe fill, again this may be a feature of what he is seated upon, a stylized back rest, a lion throne or some such, but this is a very elaborate piece for the period.

The figurine is carved of hard Nephrite or serpentine, a mineral similar to Jade, and likeliest the earliest ever found though a period of Nephrite culture occurs in the Balkans from the VII to Vth millenium BC this could be were that tradition originated;

In purely artistic terms the piece is ahead of its time, in that it reclines into the seated position in a naturalistic manner yet is also poised and alert, as if about to rise, early expression of mannerism which is also seen in Vinca figurines, so generally ahead of it's time, the alien leader.

Looks to me he is holding something in his left hand. A tool, maybe a hammer or chisel for stone cutting.

Don't tell the Masons this.

Not so sure, but the same heavy costume padding could be seen on the knees as in Jomon and vinca figurines, seen left and right here. 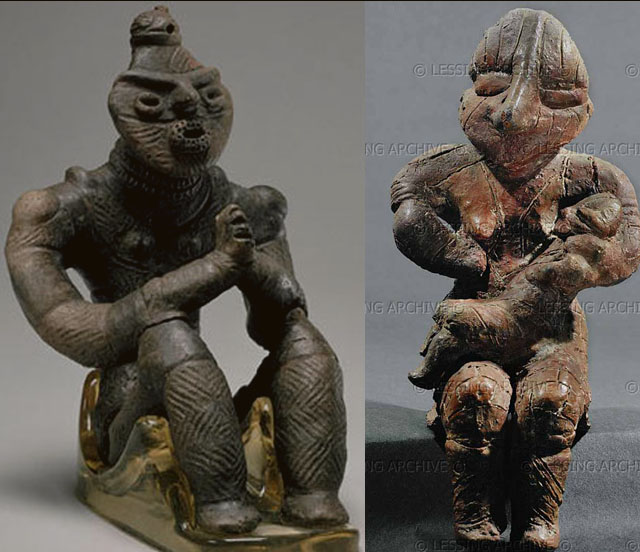 I think it is a successful hunter on his way back from the hunt. He is squatting to poop.
When you gotta go, you gotta go.

Yah, if it's a penis it looks more like it's hanging down and flaccid.

originally posted by: Sigrun
a reply to: butcherguy


Ever crap in the woods?

It is nice when you can find a narrow log or flat edged rock to hang your arse over, then wrap your hands around your lower legs below the knees, just like this dude is doing, like a prehistoric Squatty Potty.

That and the Big Ass, Big Boob fertility goddess.

I also am wondering about the penis on this figurine. Did they usually show them flaccid?

The video- I loved it. Can you post a link to this guy or tell us his name or channel? The way he laid out his presentation was so organized and informative. I'd like to see other videos he's done!

Also about the figurine- am I undrstanding correctly from the (fabulous) video that it's not associated with the original site, but rather with the back-filling?
edit on 14-3-2018 by KansasGirl because: Question

but anyway to see that as a phallus requires exposure to the modern artistic convention of foreshortening and over exposure to Freudian conditioning.


Very well written! I think you´re actually onto something here. It takes a great amount of brainwashing, so to speak to degrade such marvelous art findings to some sort of "this is phallic"-nonesense explanation.

Doing this does them (our ancestors) wrong in terms of their early genius. This "ugga-ugga"-type civilization knew better than trying to express penises in every piece of equipment, building or art.

You often hear such nonesense from dusty stereotypical mid-50´s feminists. With horn glases.


no offense against horn glases...they are not at fault.
edit on 14-3-2018 by verschickter because: (no reason given)


Unlike the self-appointed moral police of our modern times, they were definitely not thinking of the children.

posted on Mar, 14 2018 @ 11:42 AM
link
a reply to: Blue Shift
They didn´t give a # because they had real problems to face. Getting "emotionally offended" not being one of them..I know you know this but it has to be written..

That figure on the right is holding a child in their lap.

Crude caving to be sure.

originally posted by: intrptr
Crude caving to be sure.

One thing that interests me is that it has a perforation in the lower part of the figurine, meaning that it might have been attached to a cord or string and hung up, or even worn. But that would also seem to indicate that it was intended to be viewed "upside-down." So what does that do to the interpretation? 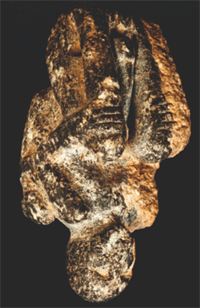 
originally posted by: intrptr
Crude caving to be sure.

Same goes for the ruins.

Incense sticks? Even the vedes have them described in their texts.

originally posted by: verschickter
Incense sticks? Even the vedes have them described in their texts.


Then that really would imply that the little man is actually taking a dump.