Shannon Watts (gun control activist) makes a fool of herself

posted on Mar, 12 2018 @ 06:45 PM
link
Oh I know the source will trigger some folks.. Find something factually wrong with the article.

This woman isn't just some deadbeat on Twitter, she is founder of Moms Demand Action, and one of the faces of the gun control movement. Is it really so much to ask that she have the slightest #ing clue what she's talking about?

Second Amendment advocates frequently point out that many gun control activists' focus on assault rifles is largely superficial. What distinguishes a regular semi-automatic rifle from an "assault-style" rifle often comes down to whether or not gun control activists believe it looks "scary."

In a tweet that perfectly demonstrated this often superficial approach to what guns Americans should or shouldn't be allowed to own, in the heat of the gun control push following the horrific Parkland shooting, gun control activist Moms Demand Action president Shannon Watts tweeted out an image of an intimidating looking gun that she noted can be purchased at Sportsman's Warehouse: 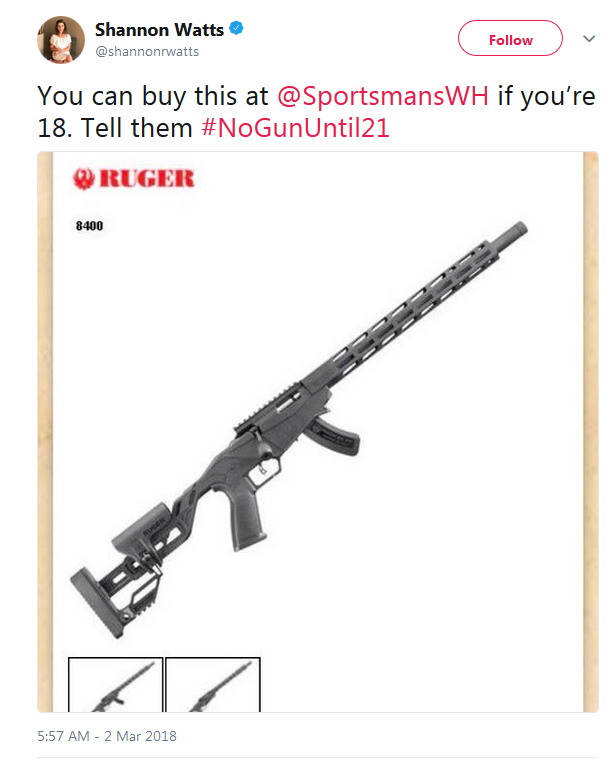 I took a snapshot in case she deletes the Tweet, but here's a link to it. She's famous for deleting her snafus and blocking anyone who dares challenge her absurd claims on Twitter. I myself am blocked by her. Her block list must require it's own server at Twitter HQ.

Now I shouldn't have to explain why this is absurd, but I will because there are going to be users who just don't get why this is a story. First of all, this gun fires the .22 LR rimfire cartridge, one of the weakest cartridges on the planet. There are smaller calibers, but .17, .22 etc are all at the bottom of the barrel. .22 has virtually no recoil. I've literally seen someone put the butt of the stock up to their nose and fire a .22 rifle. Almost anything else the recoil would cause this to be extremely dangerous. There's very little recoil with a .22 because there's very little power in the cartridge. Can it still kill? Sure. But if you can't own this, you'd pretty much just have to take all rifles off the market.

The other reason is, it's bolt-action. It LOOKS like an AR-15 if you don't have a clue, but not only is it not an AR-15, it's not even a semi-automatic rifle. The action is totally manual.

Now some people will point to the fact that this tweet was about not wanting people to be able to buy a gun before they're 21. That's true, but obviously what she was trying to do was make the point that an 18 year old can walk into a gun store and buy a really dangerous rifle, and she picked one of the least dangerous rifles manufactured.

Bonus: one thing that's cut off in the screenshot that was in the original tweet if you click on the photo is the caption below the rifle that "gun purchases cannot be combined with other merchandise online". The reason for this is because, despite gun control propaganda, if you buy a rifle through a store like this online they will not ship it to your door. They will ship it to a licensed dealer near you and you will have to go pick it up in person, where that dealer will run a background check on you. This is what they call the "online loophole". Ironic that she accidentally included in her tweet an indication that this is in fact not a loophole at all.

ETA: Update: I brought this to Dana Loesch's attention on Twitter. I'm sure she'll have a field day with this.
edit on 12 3 18 by face23785 because: update

I question the IQ of anyone that wants to ban/alter the 2nd Amendment.

posted on Mar, 12 2018 @ 07:03 PM
link
a reply to: DBCowboy
Ya well I want the IQ to be determined of anyone that doesn’t know how to properly smoke meat. We all want things. Kinda like how I want to throw a snickers into a public pool.

It's impossible to have a genuine or productive conversation about firearms because gun control activists don't use logic. Their entire argument is emotion-based. That's why they're parading a bunch of minors around and exploiting a tragedy to ban the big scary monsters that are guns.

originally posted by: Allaroundyou
a reply to: DBCowboy
Kinda like how I want to throw a snickers into a public pool.

originally posted by: Allaroundyou
a reply to: DBCowboy
Ya well I want the IQ to be determined of anyone that doesn’t know how to properly smoke meat. We all want things. Kinda like how I want to throw a snickers into a public pool.


Well then, if you feel that strongly about it perhaps you should get an official meat smoking policy amended into the Constitution... until you do so, however, you're comparing a hobby to a codified Right... in other words, no comparison at all.

Take a picture, post it, then have Snicker's Rights activists protest you.

we have seen it here, otherwise intelligent people that can usually think quickly and fairly accurately losing there ever loving mind when it comes to guns.

posted on Mar, 12 2018 @ 07:25 PM
link
a reply to: burdman30ott6 While I was throwing the snickers away I thought about that. And I have an answer. And that answer is the 2nd amendment. I have every right to own as long as I am part of a militia to defend against enemies either domestic or foreign.

posted on Mar, 12 2018 @ 07:29 PM
link
a reply to: DBCowboy
I would do that but those peeps are harsh and I don’t think I could take that kinda mental bashing. Those guys are mean as hell. I already have some blacked out suv outside my house. But don’t worry I got my BB gun.

originally posted by: purplemer
a reply to: face23785

Who is saying they're willing to give up freedom of speech? I'm personally quite fond of all my Constitutionally-enumerated rights.

originally posted by: face23785
Update: I brought this to Dana Loesch's attention on Twitter. I'm sure she'll have a field day with this.

Fairly sure Watts has already banned Dana. Dana spoke of a list of weak Twits that blocked her (most after they, themselves, had put Dana on blast) and Watts sounds like a familiar name.

Pretty much how I imagine some posters here.

Dumb broad getting her panties in twist over the slowest, weakest varmint rifle out there.

Kids poppin off at squirrels and she's losin her sh**!

What can you do? It's all about the emotion.