Welcome and please don't let it be your last!
The more the merrier!

Is it Jacques Delors?

We did raise in last thread that where Q uses multiple periods in stead of an ellipse it is indicative that we have to fill in the gaps.

I believe Tigertatzen has offered to think up some answers for these.

It varies between 4 and 7 dots with 7 being the most common, from memory.

Welcome to the thread and to ATS!

We think we have a pretty good little corner of the internet here. There's disruption from time to time but that is to be expected wiry such controversial topics of discussion.

Check or some of the other threads and forums, all kinds of topics from earthquakes to wordquakes.

GRILLFLAME ties in nicely with the whole MK/MOCKINGBIRD etc type of operations the spooks get up to.

The GUT and eisegesis know of what I speak.


There are many positions you can take and still find this topic fascinating. Even in the most absurd level, "Q is designed to distract from Russian collusion" all the way to "white hat's have waged war on the Reptilian bloodline", or even as innocuous as a 2020 viral marketing campaign (if so, genius i'd vote for him again!), either way, we know for sure at this point it's not a "hoax".

This could be yet another pivot of the NWO. Create a paper tiger enemy, convince the populace they're winning, make the old reality appear to be a new one, all the while continuing their consolidation of power.

The only asset they haven't taken FULL control over on this planet is "us", our knowledge of self and our belief in something greater than ourselves. An IDEA. They're trying (and mostly succeeding) like hell.

The one truth which is our power and what they fear (and use against us) is our group thought. It's why it's so important to have this discussion. It's the only way for a great awaking. A collective thought of "we are taking our lives back" vs "we are controlled" into the universe is what will save us. We have the power to command the universe to bend to our will, we have the numbers but we have lost that insight. That I think, is what Q is all about.
edit on 11-3-2018 by Rosinitiate because: (no reason given) 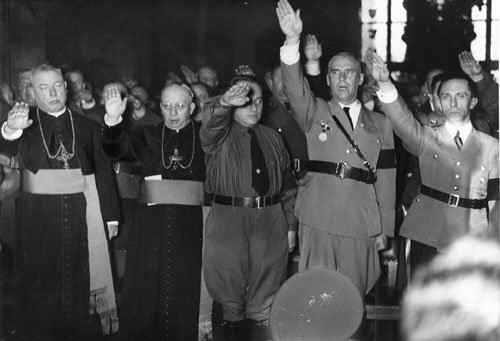 Early on especially Hitler needed the cooperation of the clergy.

Divide And Conquer. The name says it all, the tactic is to avoid Unity at all costs even if you have to lie, cheat, kill, make up fake movements, give'm the right vote for something etc. We controllers create money that fails but be right there to give'm another money after we collapse it - all the while we never use fiat currency/money!!!!

Divided keeps us controllers in power, Unity means we have to leave the entire solar system.

So in essence, at the most basic level, every single "omg sky is falling" moment is simply a way of stopping unity through fear response. One could say the most micro level of the mafia breaking your windows and then demanding money to stop the breaking of your windows is the entire planetary system with windows replaced with money, hell, terrorists, or whatever.

I see Q as pointing this out, asking folks to raise their perspective from user of the mafia's protection services to unification above where they are even possible; leaving them to sell a product no one will buy.

The flag posting yesterday was to say, "see the new boss, was always the same as the old divide and conquer boss"...

originally posted by: TRUEAWAKENING
Ok i'm out hope that helps

Thank you for everything!!!

Perhaps this is to whom you are referring?

In 1992, the European Union made what the Nobel Prize-winning economist Joseph Stiglitz calls “a fatal decision”: the choice “to adopt a single currency, without providing for the institutions that would make it work.” In “The Euro: How a Common Currency Threatens the Future of Europe” (Norton), Stiglitz lucidly and forcefully argues that this was an economic experiment of unprecedented magnitude: “No one had ever tried a monetary union on such a scale, among so many countries that were so disparate.” The idea was to force Europe closer together politically by forcing it closer together monetarily—in effect, to engineer one of Monnet’s crises, the ones that would build Europe. The nineteen countries in the eurozone (out of twenty-eight in the E.U.) would adopt a single currency but would not have a parallel system to raise tax. There would be monetary union without fiscal union. A European Central Bank (E.C.B.) would run the currency and set interest rates, but there would be no pan-European finance ministry to run the economy. If you pitched this idea to a class in Economics 101, there would be an embarrassed pause, and eventually a hand would go up and someone would ask, “Is that even possible?” The answer: “Nobody knows.” The E.U. went ahead with its experiment anyway. To raise the stakes even further, there was no exit mechanism for the single currency: monetary union was, by design, irreversible.

The Failure of the Euro - The New Yorker

'Watch your 6' is a phrase that means to keep an eye out for what is behind you.

Humans are electromagnetic energies and the collective frequency we put out creates the vibrational reality we live in.

Surround yourself with positive people.

Have the shapes of the numbers 3, 6 and 9 come perhaps from the shape of constellations? If so, which?