Give me a metamaterial for high energy radiation and I will rule the universe!

Can't be worse than their last attempt. A few Viper chase pilots got a hell of a wakeup call when things started bouncing off their canopy.

originally posted by: bigx001
I don't know if this has been posted yet but,

But the big takeaway here is not just that the B-21 will indeed execute its test program out of Edwards AFB, but that it will be rolling out of the shadows to do so soon, at least according to the 412th Test Wing's boss.

Makes one wonder how far along the building of the B-21 is.

Curious is that this comes a week after Putin describes new nukes.

B-21 Raider headed to Edwards AFB for testing

What are the "entirely new weapons?"


Looks more stealthy than the B-2.

Meanwhile, other countries are investing in small light weight weapons systems, that deliver warheads without a huge expensive platform needed to fly them all the way there.


If other nations were running off the edge of a cliff, would you follow them?

A manned bomber has several advantages over ballistic missiles or cruise missiles.

- A bomber can have a network of sensors such as electro-optical sensors and synthetic aperture radar to search for mobile targets before destroying them, whereas a ballistic missile or cruise missile must search a small area (if it has sensors), attack a fixed target point (if it does not), or rely on off-board targeting systems. This means the bomber OODA loop is much faster and therefore it can adjust to changing conditions much more easily, spend time loitering and observing, or have the weapons impact exactly when needed. Bomb-Damage-Assessment could even be conducted immediately after a strike, with a follow up strike occurring soon after.

- A bomber can launch conventional airstrikes as well. It's not just about launching nukes: 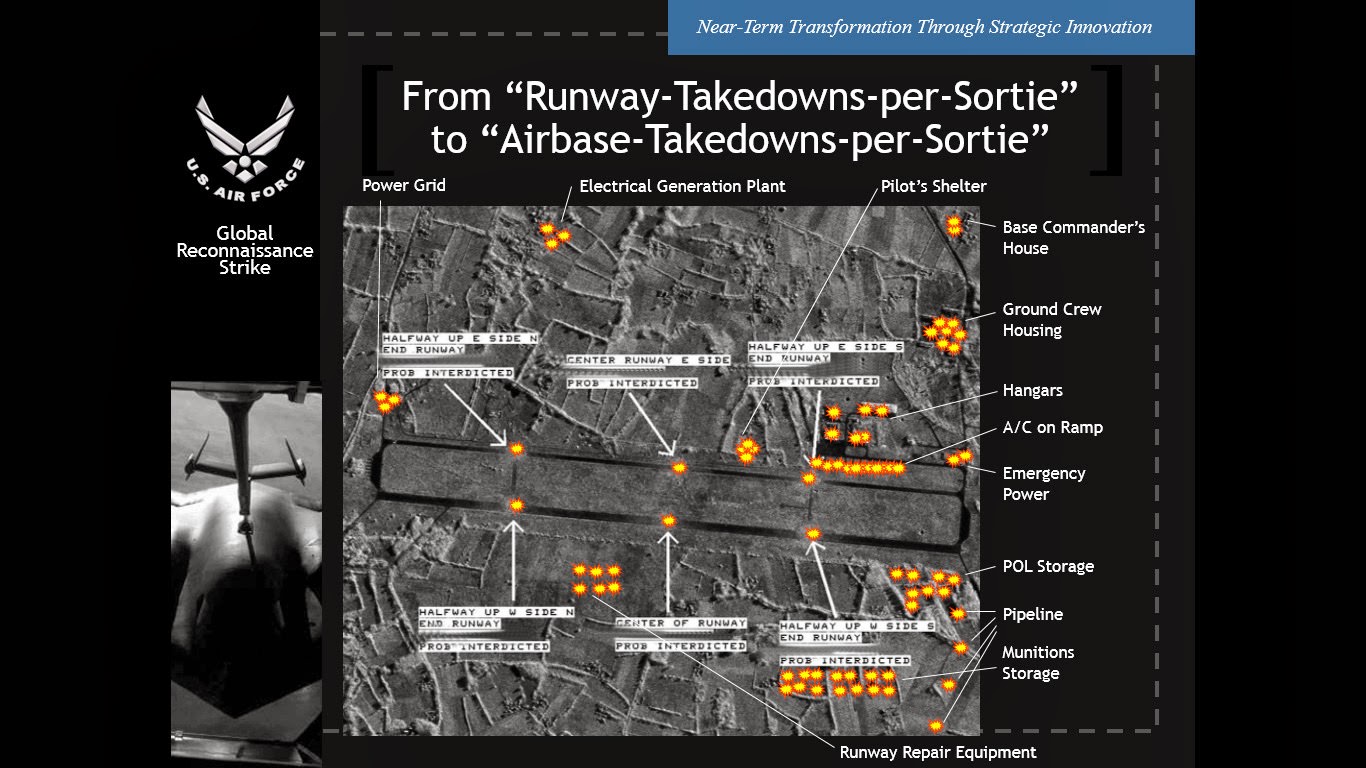 If each aim-point there corresponded to a JASSM it would have cost 65 million dollars for that strike. Note that this is still a relatively short range missile that still requires a launch platform.

If each aim-point there corresponded to a TLAM it would have cost 140 million dollars for that strike. Note that this is still a short range missile that still requires a launch platform.

Granted, each JASSM/TLAM does have more explosives than each 500 lb bomb.

If we kick it up a notch from JASSM / TLAM, to achieve the same affect without nuclear weapons, exactly how many Iskander missiles would be required to launch? Note that Russia has 136 Iskander launchers total (America will have 100 B-21's). And how much do you think these would cost compared to say, a TLAM or JASSM? The answer is a whole lot more (12 launchers 200-300 million dollars US). And of course a B-2 has effectively unlimited range, an Iskander has a range of several hundred kilometers.

It wouldn't surprise me if a B-21 used only once, would still deliver more value than conventionally armed Iskanders of the same cost.

If we expand the range out to match B-21, we end up with conventional armed ICBM's which are extremely expensive and risk starting nuclear war. Or SLCM's that you guessed it - require an expensive launch platform.

Without sensors how do you determine which airbases and parking spaces actually have aircraft in them, do you then attack them all, making the attack even more expensive? Do you instead attack civilians or less militarily useful targets?

The only way cruise missiles or ballistic missiles can achieve the same effect is with a completely overwhelming (read: expensive) attack, like when the US attacked the Syrian airbase with TLAMs (which may have given Syria a bloody nose, but did not have much military affect) or with nuclear weapons. Use a nuke against NATO and a B-21 or F-35 will nuke you back, as has been made recently clear so that rules that option out.

Not every attack requires this many munitions, but it is merely one example.

- B-2 can strike without warning. Short range cruise missiles require a launch platform which can be detected unless it's stealthy and expensive, long range missiles can be detected by satellites and radar (and the transported-erector launchers can then be destroyed on the move by a B-21 even before they launch). The only exception is a nuclear powered cruise missile, but you're pretty unlikely to be using them in a conventional war.

- Other countries do not have the same geopolitical position as the United States, long range is therefore important. Tactical fighters cannot do everything and have disadvantages - such as bases close to the target as well as limited range (therefore predictable flight paths). Range means a big expensive aircraft.

- A bomber is a good example of a high-low mix. High (the highly complex aircraft). Low (the low complexity aircraft - the bombs).

- A B-21 is also so much cooler than a ballistic missile and large tractor.

The B-21 is a far more useful weapon in reality than all of Russia's "super"-weapons combined. The good news is that Russia's new "super"-weapons are scary and should provoke a response to the detriment of Russia, they are excellent propaganda (just not in the way that favors Russia).

And China is building the H-20.

The Russians keep talking about the PAK-DA.

Nope, no one else is building bombers.

Think of it. The cost of a whole airfield, hangars, crew, maintenance, inflight refueling, time to target; all to deliver a bomb to target.

When a single sub, ICBM or cruise missile can do the same thing, by itself.

China and Russia know if they build one or two of those they will start the uS spending trillions to counter it. While we expend our stores blowing up and occupying pissant countries around the world, they are sitting back building their reserves, in quantity.

I can hear them snickering.


Did you say 'significantly less' cost overruns, this time?

The history of defense budget waste notwithstanding.

originally posted by: Zaphod58
Not everything that gives a plane that wow factor is in its looks.

One of the reasons that I was a big fan of the A-6.

A lot of people were. I don't blame them either.

Pretty comprehensive. I doubt he read most of it.

I don't think anything will outlast that bitch. Heh.

There's snickering, but I'm not so close as to be able to hear Russia and China doing it.

The problem with the above is...THEY ARE BUILDING THE SAME THINGS WE ARE.

They are building long range bombers (H-20, PAK-DA, building more Tu-160). They are building carriers (1 rebuilt Varyag, an improved Varyag, a new class and soon nuclear powered carriers for the Chinese. The Russians talk about it, but...)

The Chinese are even building cruisers for air defense for their carriers. Oops, no, no no. THEY can't be. That's an AMERICAN stupidity. /s

The Russians and Chinese are studying how to defeat American combat forces, to be sure. They are building weapons to do so. However, they are also trying very hard to replicate the capabilities the US military has. There are no alternatives to carriers for power projection. Attempting to do it with hypersonic missiles will make you go broke.

You keep saying the Chinese and Russians are being smart and the Americans are being stupid. However, they're doing the same things we are, just a bit behind. Saying they are not - especially when they are stating they are! - doesn't make it so.

That's always pissed me off. A company that i worked for at the time built the first six ship sets of flight controls. Every day we went through the security hassle that was required and the first time we get to see what we had been working on is the six o"clock news. If they knew that they were going to release the images why not show us them earlier in the day? We had kept that secret for over a year, we could do it for a few more hours.

Did you say 'significantly less' cost overruns, this time? Yah, sure... The history of defense budget waste notwithstanding.


Should have let Lockheed do it...