Yes, they definitely do look like UFO's but a bit of research a while back lead me to realise that this is how things, particularly religious themes connected with the Crucifiction, were depicted in Byzantine/Renaissance Art.

This is the personification of the Sun and Moon, apparently.

If you look at the Moon one, it appears to even have insignia like modern day aircraft but the explanation, as much as I wanted it to be something else, is Art not UFO's.

There are lots of examples of what look like definite UFO's in ancient Art that have religious explanations. Quite fascinating really.

originally posted by: TrulyColorBlind
And by the way, what would you skeptics of the UFO phenomenon accept as valid proof?

Do you really want to know? Because I'll roll out my list again:

1. Multiple photos / videos of the UFO taken from different perspectives and different people, none of whom are anonymous.
2. Some kind of physical object (piece of metal, alien ship, live alien body, etc.) directly tied to the UFO through a clean and clear chain of evidence.
3. Independent experts in various fields verifying that the physical object is in fact "alien."
4. An announcement from a recognized public authority (President, Prime Minister, Pope, Neil deGrasse Tyson, etc.) confirming that it's alien.
5. (Bonus requirement) The opportunity that I might personally be able to see and touch the object.

Well, you say, those requirements are pretty high. But they're the same thing I would require for anything where its very existence is in question. I've never personally seen the Eiffel Tower, but it would satisfy all the requirements, so I'm pretty sure it exists. If you're willing to settle for less, then you open yourself up to being a sucker.

And by the way, what would you skeptics of the UFO phenomenon accept as valid proof?


I am a witness, not a disbeliever. My dad was a photographer, had his own darkroom.

originally posted by: JimOberg
My definition of proof of ETI visitation is informational --
www.jamesoberg.com...


Certainly, whatever object or information we gather from a bona fide UFO or aliens, we'll need a consensus from multiple experts everyone agrees are qualified. The thing or information has to be clear and unambiguous enough such that most people will believe it. There will always be some fringe obsessives who won't, but for the most part people will go along with a consensus if they're shown the logic and reasoning behind it. 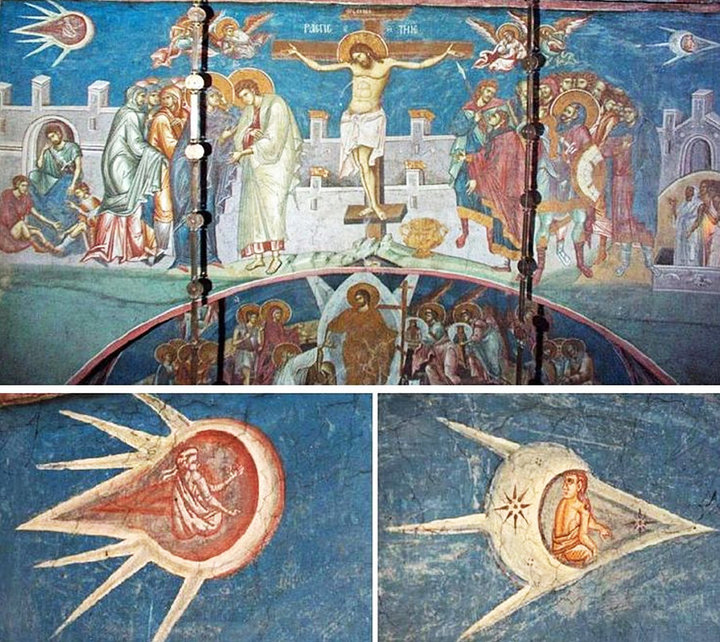 The man in the orange “craft” in the top left is representative of the Sun and is occupied by a male. Look beneath on the “earth plane”, see all the male figures below the male in the craft? Men are strength or “Mind”

The woman in the white crescent shaped craft on the right is above all the ladies on the earthly plane below. They are dressed in white. Women are nurturers and preservers and are the “body” and beauty.

The center “pillar” is Christ, or the Center path to the Keter if you research the Kabbalah, and so he is the earth representation of male and female which all come of the divine as an emanation of Him. And so he is the middle pillar through the top of his head is the path back to God, which we all should strive to achieve through our daily living. Christ is the soul, and represents wisdom.
edit on 14-3-2018 by GodKilla because: (no reason given)

Looks like a time machine to me. A worm hole.

Exactly 40 years apart from each other. 1st satellite in space was in the 1950s.

If you go to elon musk's space x launch website that tracks everything, it's actually blatantly called spacextimemachine.com.
edit on 30-4-2018 by deathproof because: (no reason given)

posted on May, 17 2018 @ 10:35 AM
link
Why has no one mentioned the connection of time travel? Everyone online just seems to focus on the UFO aspect of the story. I am shocked no one else here has pointed this out.

Except in those paintings they represent the sun and the moon.

How do you know what they represent?