No that's not why he hasn't charged him YET. He doesn't work on your schedule nor does he care whether you think there's evidence or not. There's plenty of evidence just in what we know. Mueller is just getting his ducks lined up.
You guys claim there's nothing at least twice a week these days and the case keeps moving forward despite those opinions so..... tomorrow just brings more and more.


You talk alot but don’t say anything.

originally posted by: amfirst1
a reply to: Sillyolme

lol Mueller is desperate for anything. I think Trump should just open an investigation into the DNC and rigging the elections against Bernie and Mueller and Comey collusion with the DNC. Every representative should turn over 10 years of financials and all emails for the pass ten years.

Any crimes outside of collusion would be deem worthy of jail time.


That investigation that you allude to is actually wider in scope. It has been going on for several months and most people don't realize that Bob Mueller is assisting. Some major unpleasant surprises are in store for Democrats.

Oh and who are you, keyboard warrior?

Mueller is a lifelong Republican with over 40 years experience and a Vietnam war veteran. Who are you to tell him what he is or isn't?

No, Trump has no "friends" in the world, just people that have used him and people that he uses. Trump isn't a community organizer of poor people, nope. He specialized in the "luxury lifestyle" - real compelling Christian, there. He doesn't have 10% of the integrity Obama has and had in the office.

Trump's "friends" read like a "Who's Who" of international crime - which is precisely the problem.

And look at all these Americans (40% or so) who are willing to go to bat to protect the Russian mob, all bc Trump decided to run as a Republican.

He makes conflicting statements within one conversation. Just more reason to not trust him. That signifies deceit to most of us. You judge differently I know...

He knows more about the room they were in when they had these conversations then the people who were there. He knows where they sat who they sat next to who had coffee who has bottled water. He knows it all before he even asks.
Witnesses who have already been questioned by mueller have said this week he is asking a lot of questions about what trump knew and when he knew it as far as the hacking of the DNC. And they say he seems to already have the answers before they give them.

No one but conspiracy theorists are even looking at this. The rest of the world shakes its collective head in pity. Keep the crap out of my thread if you don't mind. It's off topic.


How can anyone keep crap out of your thread when 101% of your posts are utter bull#? I honestly can't tell if you are the dumbest person on this planet or a paid shill. The sad part is that even if you happen to be on a payroll, there are plenty of idiots whose thoughts actually do mirror the nonsense you post.

Co-signed. The funny part is the "crap" I posted is completely relevant to the thread topic, the OP just doesn't agree with it. The tactics of the left are so predictable.

Rolls eyes. Why you do this to my Dimmy? Why???

Because everybody he talks to works out of the whitehouse and that's where the leaks are coming from.

Oh, I believe Mueller is out to get Trump.

But that's just because he won.

Funny. Yeah he's in awe. We all are. This incredulous president boggles the minds of the best thinkers.

New person? Or rerun...
You know me and my post history how?
You joined in 2012 and have nineteen posts but you're going to pretend you know my post history??? Even though you've been absent? or you just hacked someone's old account and are a Russian trying to change the conversation?


Starting to sound more and more like CNN here every day... 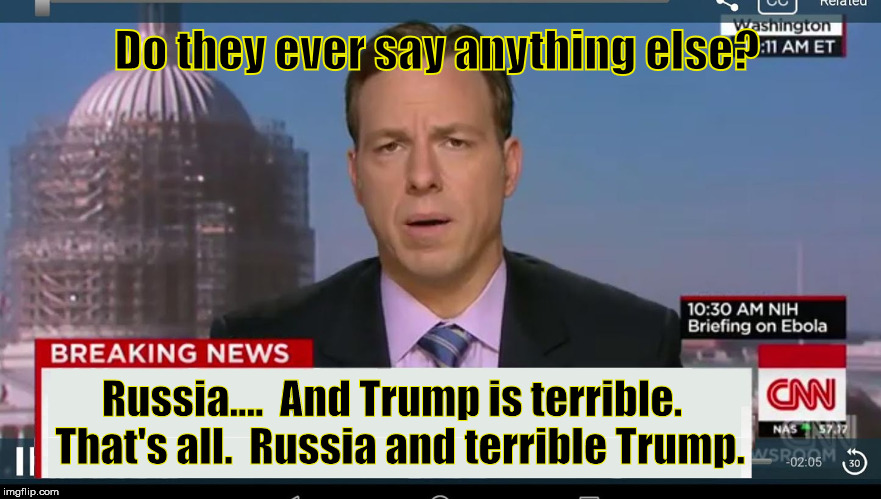 Well see there's the problem. You think trump can just call for an investigation of his rival just because Mueller is investigating him. Nope. Welcome to America. Where even idiots are protected by the law.

Mueller was head of The FBI in 2013 when Hillary's private email
was hacked by Guccifer.

Then they tried to hide it, but failed and this led to the
referral to the DOJ to investigate.

Guccifer was the smoking gun.

You have to look at the person who starts the thread to determine what the content of it will be. It's fun to wade in and voice your opinion every now and then.

Congratulations! You have put two plus two together. Republican special prosecutor working with Republican president. The end is certain.

No it's not. Your mistaken ...
Again. This isn't a thread about fantasy murder schemes. It's about Robert Mueller and this new revelation about his request for documentation. How many times do you need to be told that? Or just read you'll see you're the only one talking about Seth Rich.