So when is the 28,000 day benchmark InhaleExhale?


I hope that answers your questions.

posted on Mar, 4 2018 @ 09:48 AM
link
Are you sure it's not a long term Christian plot to bring back Christ? If you put all the fig tree parables together what you get is a veiled prophecy on the reconstruction of a nation of Israel being necessary to bring back the return of Christ. And it would take place 70-80 years after it returns as a nation.

originally posted by: ntech
Are you sure it's not a long term Christian plot to bring back Christ? If you put all the fig tree parables together what you get is a veiled prophecy on the reconstruction of a nation of Israel being necessary to bring back the return of Christ. And it would take place 70-80 years after it returns as a nation. 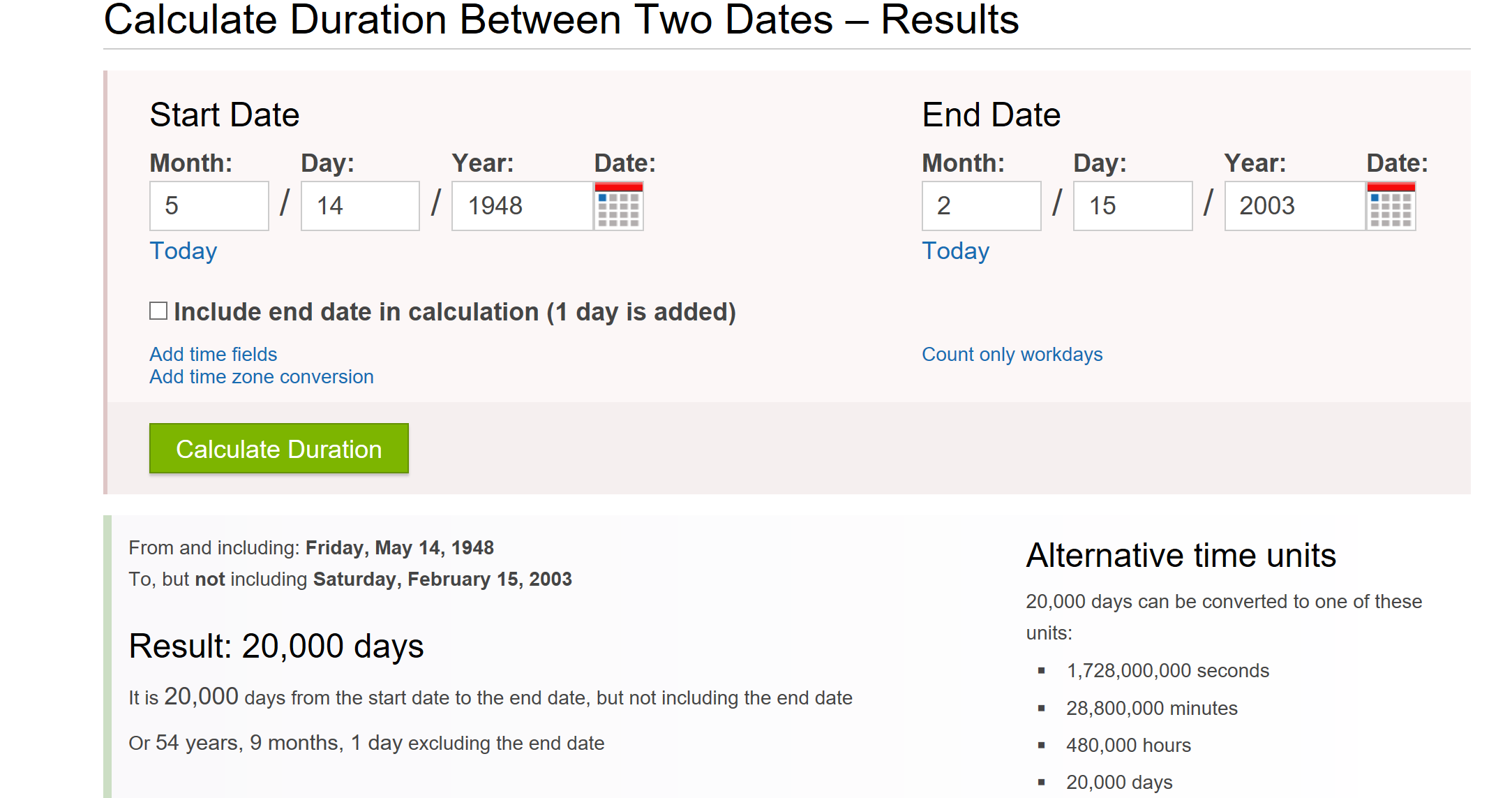 
Gozer the Gozarian is coming.

I think Gozer is real.

the creators of Ghostbusters had some occult knowledge... that's for sure.

No, not really. If the country was founded on May 14th, 1948 then it is included. This is the same reason we use July 4th as our Independence Day since, you know, we actually proclaimed independence that day.

Demonstration that meant nothing and just shows people have way too much damn time on their hands.


Is this a Zionist Plot?


No. The Zionist plot was to use the U.S. military and political muscle to enable the punishment of Iraq for launching scud missiles into Israel during the previous Bush's Desert Storm. The old saying "an eye, two arms, and a leg for an eye" comes to mind.

20,000 days later... The largest global protest of all time occurs.


The timing of the protest marches had to do with events associated with actions within the U.N. Security Council, ie the massive pressure that the U.S. and UK were applying to other council members.


It was an amazing moment — powerful enough that governments around the world, including the soon-famous “Uncommitted Six” in the Security Council, did the unthinkable: they too resisted pressure from the United States and the United Kingdom and said no to endorsing Bush’s war. Under ordinary circumstances, alone, U.S.-dependent and relatively weak countries like Angola, Cameroon, Chile, Guinea, Mexico and Pakistan could never have stood up to Washington. But these were not ordinary circumstances. The combination of diplomatic support from “Old Europe,” Germany and France who for their own reasons opposed the war, and popular pressure from thousands, millions, filling the streets of their capitals, allowed the Six to stand firm. The pressure was fierce. Chile was threatened with a U.S. refusal to ratify a U.S. free trade agreement seven years in the making. (The trade agreement was quite terrible, but the Chilean government was committed to it.) Guinea and Cameroon were threatened with loss of U.S. aid granted under the African Growth & Opportunity Act. Mexico faced the potential end of negotiations over immigration and the border. And yet they stood firm.

The day before the protests, February 14, the Security Council was called into session once again, this time at the foreign minister level, to hear the ostensibly final reports of the two UN weapons inspectors for Iraq. Many had anticipated that their reports would somehow wiggle around the truth, that they would say something Bush and Blair would grab to try to legitimize their spurious claims of Iraq’s alleged weapons of mass destruction, that they would at least appear ambivalent enough for the U.S. to use their reports to justify war. But they refused to bend the truth, stating unequivocally that no such weapons had been found.
February 15, 2003. The Day the World Said No to War.
February 15, 2013 | Phyllis Bennis


Bennis is a fellow at the Institute for Policy Studies (IPS) in Washington, D.C., and of its offshoot, the Transnational Institute in Amsterdam. At IPS, Bennis directs the New Internationalism Project, which “works primarily on Middle East and United Nations issues,” focusing on “the U.S. wars in Iraq and Afghanistan, and the Israeli occupation of Palestine.” The project makes use of “education and activism” in an effort to change American policy and also seeks to “democratize and empower” the UN and free it of “U.S. domination.”

She is also a founding member of the U.S. Campaign to End the Israeli Occupation, which was established in 2002 during the Second Intifada, and currently serves on its steering committee. She is a leader of United for Peace & Justice and co-chairs the UN's International Coordinating Network on Palestine.
wikipedia: Phyllis Bennis


I'm afraid that it would literally blow my mind to entertain the notion that Phyllis Bennis is part of a Zionist plot in any capacity other than as the opposition thereto.

The 15 February international protests were unprecedented not only in terms of the size of the demonstrations but also in terms of the international coordination involved. Researchers from the University of Antwerp claim that the day was possible only because it "was carefully planned by an international network of national social movement organisations."[7]

The idea for an international day of demonstrations was first raised by the British anti-capitalist group Globalise Resistance (GR) in the wake of an anti-war demonstration in Britain of 400,000 on 28 September. At the time GR was involved in planning for the Florence European Social Forum (ESF) and brought up the suggestion at an ESF planning meeting. According to GR's Chris Nineham, "There was considerable controversy. Some delegates were worried it would alienate the mainstream of the movement. We, alongside the Italian delegates, had to put up a strong fight to get it accepted."


Some people in U.S. cities marched under a banner Not In Our Name. NION was founded on March 23, 2002 to protest the U.S. government's course in the wake of the September 11, 2001 attacks, including the lead up to the unprovoked invasion of Iraq.


NION urges a movement of resistance: "President Bush has declared: 'you’re either with us or against us.' Here is our answer: We refuse to allow you to speak for all the American people... We refuse to be party to these wars and we repudiate any inference that they are being waged in our name or for our welfare..." It indicates as inspiration "...Israeli reservists who, at great personal risk, declare 'there IS a limit' and refuse to serve in the occupation of the West Bank and Gaza", the abolitionists, and "those who defied the Vietnam war" and concludes, "we will resist the machinery of war and repression and rally others to do everything possible to stop it."
Not_in_Our_Name


Strange thing: NOIN was disbanded in 2008. When I clicked the link www.notinourname.net/ I was redirected to Jewish Voice for Peace. If backing BDS is anti-capitalist then ... I don't know??? If supporting Right of Return for exiled Palestinians is a Zionist plot, then ... Some Jews may not be Zionist conspirators. A possibility perhaps.

Hard to counter that one...

but we need to mindful of those who play both sides... many of those NION celebs are suspect.

and we need to be mindful of certain codes... they can't all be coincidences.