Donald Trump wants to suspend due process, and wants to try out being President for Life

Trump makes comments to also start dialog. He wants fixes not just bantering between parties as what we typically see. If people trigger on his every words as if his every word is going into law they have a long 3 more years ahead of them.

One would think the left would see it refreshing that he seeks an answer to the problem of known unstable people that still have guns around them. He said that if we wait on the court in these cases it will not work since the courts are extremely slow and we will have more cases of unstable people killing others.

He just wants a path forward towards this one area, so why do people not see that and instead get all fired up by saying " Trump wants to take your guns away" You know, by the same people who want our guns taken away as their fix...lol Give me a break..


I wish people would not waste all their energy and wait to see what actually transpires.

Tbh I never voted. There is a large group of us who lost faith on the government a long time ago.

It also exposes how Trump has lost his mind. Creeping dementia, exacerbated by to many steaming bowls of covfefe. believe me!!

Now even Fox is aware of Trumps melt down. Finally actually "Fair and Balanced"

posted on Mar, 4 2018 @ 11:39 AM
link
Jesus, liberals are crazy
I just realised that Trump made the term limits comment as a joke at the roast last night or maybe some dinner??? The whole room laughed as it was a JOKE.
Unbelievable how Trump Derangement Syndrome has gripped so many.

originally posted by: Jiggly
i too freak out over a joke

Someone asked me why the chicken crossed the road once.

I shot them with my assault weapon.

What he said was morose and provocative. But they are words, not action. Thus are not the "very definition of tyranny" you reference.

It really would be most useful if folks would quit trying to pass off hyperbole under the banner of "literally"..) It does wonders for ones mindset and outlook.

You are a bloody moron if you believe thats what Trump wants..

Listen to the recording, it was.clearly a tongue in cheek joke to which many laughed

Fair enough.
Rightists want anyone who isn't a Christian to die or leave.


What is your definition of a Rightest?

It was said during a roast as a joke. Obviously some people can't take a joke but insist we have a joke as President but can't take him either


Oh wait, they want it abolished.


They do? All of them?
Source?


That's the collection assumption of the right. Not every democrat wants to abolish the 2nd amendment.

It's crazy isn't it.

People act like Donald Trump hasn't bragged about being "good at killing people" or authorized killing Americans without trial ...

originally posted by: babybunnies
In the last 48 hours, Donald Trump has said that he wants to suspend due process so he can give police power to take guns whether they have a reason or not, and tonight said that he could try out being President for Life after President Xi suspended term limits in China.

This is the very definition of tyrannical leadership. It's what the Second Amendment is in place for.

If the far right really were true Patriots and strong on the Constitution, they'd be all over these statements and organizing armed uprisings. There's certainly enough people who claim that they only arm themselves to protect themselves that if they really were Patriots, they would form a militia and rebel.

The reason The Founders put together the Bill of Rights and the Second Amendment was to give people the power to change government when it became Tyrannical.

I would suggest that someone even making statements about wanting to be President for Life and take Due Process away from the people is really heading towards Tyranny.

Where is the "Horse crap" button?


It may be, and I’m just having a guess here, that back in 2014 there was a rumour that Obama would run for a third term.

Now, Obama never even spoke of such a thing, yet right wingers got all upset over that (fake) news...so you can see why lefties might jump all over Trump actually saying it...yeah?

Oh and he said it in humour?

You know what else is funny? All of the Trump apologists who say "Oh, he didn't really mean that. He was only joking."

It's not funny. He's not joking. He's testing. Throwing this stuff out there to see what sort of response he'll get. If it's not favorable enough, he'll walk it back. If he thinks he'll get enough support or enough idiots who think he's only joking, he'll push ahead another level.

Psychologically, this man is a tyrant waiting to happen.

When people were screaming bloody murder about indefinite detention half the country whistled past the graveyard because their team was "winning", when people were up in arms about the assassination of Americans without trial it was condoned by some because their team was "winning", when the President gave De facto citizenship to hundreds of thousands it was great thing because someone's team was "winning (even though it subverted the power of Congress), now a President makes known his ideas and camps will draw their lines in the sand to decide if the "win" of not.


That is hilarious. Good thing Dons dark powers are greater than hers. 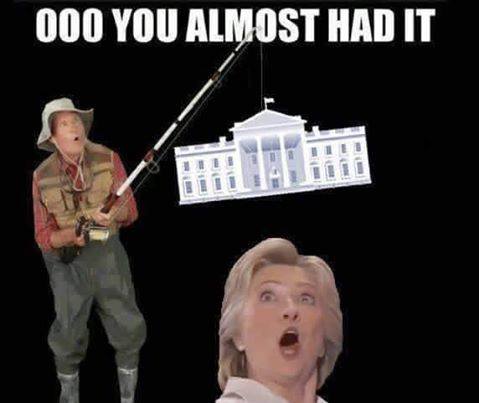