dude your actions were not putting people in danger

there is a difference

Neither are they. People are free to buy their boom boom sticks somewhere else.


originally posted by: howtonhawky
I suppose the time for that would likely be after a case was filed?

Until what would i be briefing if no case is present?

Uh, no. An amicus brief is filed in court by someone who is not directly related to the case under consideration, this way you can help this poor schlub from Dick's.

I figured a scintillating Constitutional scholar like yourself would have known this simple fact.

You could do it pro bono (that means free).

What's missing here is that young man selling firearms, or tent stakes. If he is a qualified firearms clerk, then it really is Dick's loss. If they put a SJW boob in his place and someone passes off stolen I.D. to buy a rifle, then Dick's will be in the hot seat, with the ATF. And speaking of them, Trump can order the BATFX to take away any and all FFL's from any Corp. which discriminates, against honest U.S. citizens, by Religion, Age, or Race. That goes for Dick's, Walmart, but not R.E.I. as they never sold firearms in the first place. FFL's don't cover other recreational implements, but only ammo and guns. R.E.I. has also severed ties with Vista Outdoors, who own Savage Arms, because they didn't jump on the guns takeaway bandwagon quickly enough. Only U.S. citizens can legally buy firearms from F.F.L. dealers. So, blatantly discriminating against U.S. citizens, doesn't seem to be very smart.

Me thinks there is going to be one h##l of a shakeout, coming. Dissing the NRA members over 13 discounted tickets for traveling to the recent NRA convention, is presently costing Delta Airlines, something around $50,000,000, at one airport alone. Today a Nor'Easter is blowing up New England. But now, the Gulfstarian winds of change are looming to do so much more.

In the end, everyone only wants a level playing field. And in the end, the Public gets what the public wants. Handguns always require 21 years of age, for purchase. Now rifles, which are only a loss leader for the most part, can be taken away by the Feds, through limiting F.F.L.'s. to some of these Big Boys. Then R.E.I. will be competing directly with the much larger Wally World, and Dick's, combines. You make money by peddling all the other things needed along with a rifle with which to go hunting, or competing with. Now the smaller chains will get a boost by Trump, if they honor the 2nd Amendment.

edit on 3-3-2018 by carpooler because: explain loss leaders

I thought the mom & pop indie shops were supposed to be the gun folks' salvation here. NBD about Walmart & Dick's, they'll pick up the pissed off consumers!

At least, that's what's being parroted 'round the site. The sky's not falling, and you're not Chicken Little.

Trump can always tell the BATFX to recind any FFL's of Corps. which discriminate by Religion, Age, or Race. No outfit has an inalienable right to possess a F.F.L. And if Wally World and Dick's lose all of theirs, Trump can say, take a number and wait, for the next POTUS.

So, no matter where you live, you cannot deny service to someone because of his or her race, color, religion, national origin or disability. In some states and cities, you also cannot discriminate against people because of their sexual orientation. If there is no state, federal or local law prohibiting discrimination in public accommodations against a particular group of people, then you can legally refuse to serve that group of people.

If there’s an anti-discrimination law, does that mean that a business can never refuse service to a member of a group that is protected from discrimination?

The answer is that you can refuse to serve someone even if they’re in a protected group, but the refusal can’t be arbitrary and you can’t apply it to just one group of people.

To avoid being arbitrary, there must be a reason for refusing service and you must be consistent. There could be a dress code to maintain a sense of decorum, or fire code restrictions on how many people can be in your place of business at one time, or a policy related to the health and safety of your customers and employees. But you can’t just randomly refuse service to someone because you don’t like the way they look or dress.

Second, you must apply your policy to everyone. For example, you can’t turn away a black person who’s not wearing a tie and then let in a tieless white man. You also can’t have a policy that sounds like it applies to everyone but really just excludes one particular group of people.

You could sacrifice yourself and your soul or your money.

Its not a hard choice IMO.

Never be afraid of anyone or anything. A boss, a customer, anything.

There is always a next step.


"I cannot be the face of these new gun policies in affect [sic]," the letter reads. "I find them morally and constitutionally wrong. I refuse to be a part of a corporation with these liberal policies." Mccullar — who identifies himself as a 20-year-old avid hunter — apologizes for the inconvenience, stating that otherwise he had great experiences with Dick's coworkers and management.

"I firmly believe that it is morally and constitutionally wrong to infringe upon the rights of a law abiding citizen in any way, and I will not work for a company that pushes for the restriction of the Second Amendment," Degarmo wrote. "Also I will not take part in the systematic discrimination Dick's Sporting Goods CEO Edward Stack has arbitrarily decided to implement."


Thinking long term this could soften dicks new policies to the point that even 60's style discrimination of 18-21 yo comes undone. Yep i believe that there is a suit in the works and not only dick's & wal-mart's new policies will be shot down in the courts along with all restrictions on 18-21yo's.

I have been clear from the start in my position and i believe i am correct that it is simply discrimination to force age limits on buying guns. The only restrictions that can legally be placed on the 2nd is one of ability and not age.

18-21 should be able to purchase with military id or training certificate certifying ones ability to bare arms.

NO OTHER RESTRICTIONS ARE CONSTITUTIONAL


That's the thing with these entitlement snowflakes...
Maybe the Dollar Tree is hiring down the street...

originally posted by: howtonhawky
a reply to: dug88

(post by Gothmog removed for political trolling and baiting)
filthyphilanthropist

Great conviction, and I think he pinned it correctly too. He never claimed that Dick's actions are unconstitutional because they aren't. Dick's can do whatever they want. He did however state that they push for unconstituional actions. Such is why he quit.

Good, to bad so sad. Its not like you can not legally OWN one. These KIDS are making a mountain out of a mole hill. I agree with the policy, and don't give me the "I can die for my country but cant own a gun BS" Last time I checked joining the military is voluntary, and the draft has not been used in decades. Hell I don't think kids even sign up for the draft, like I did, do they? 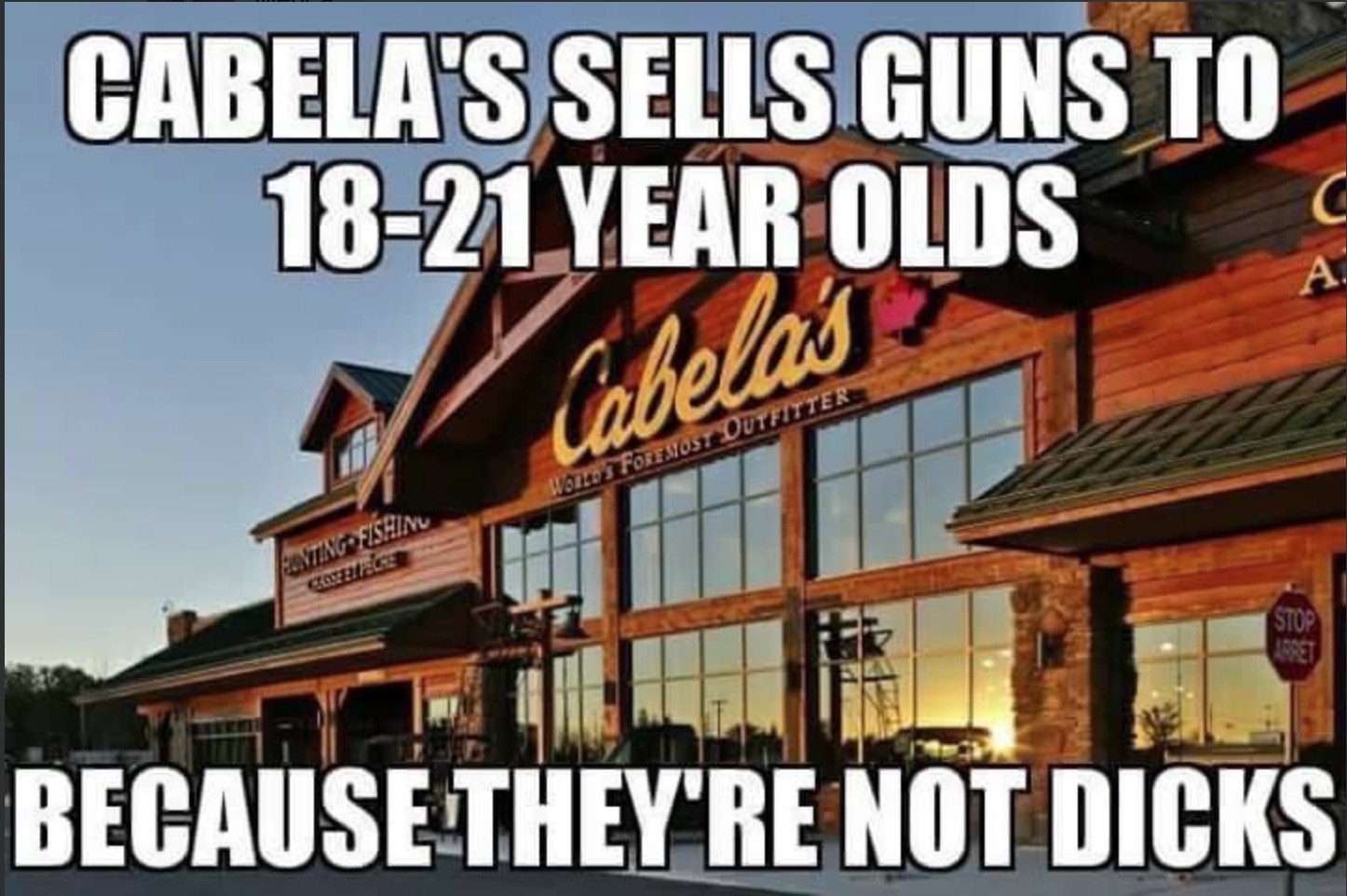 they surecan but when their policies violates someones rights or law of land they can be held accountable and or sued.


It's still a felony to not do so (for males). Some do not do so, still. More out of ignorance than anything, probly.
edit on 3/3/2018 by Phage because: (no reason given)


originally posted by: howtonhawky
no but they must follow the constitution.

The Constitution only applies to the government. It is a list of things it cannot do.

Thank you brother! Although from what I can see, this fact seems to have completely flown over his head. That has a tendency to happen when one insists on arguing about a subject one obviously knows very little about.


originally posted by: howtonhawky
a reply to: dug88

Dick's (The store) wins. People are so divided on this issue like almost every other and this is big free publicity.

I really don't follow the logic otherwise. It seems they have the right to implement the standard though and made the choice to do so.

Hell the only reason I knew to do so when I turned 21 was my dad being in the military. It wasn't exactly something they taught us in school, so I could see ignorance being the main reason.