What did they ever do that was interesting, apart from the first Banting Diet?

And apparently they didn't all just evolve into Neanderthals or whatever, they outlived other hominids regionally!

In fact, perhaps Bigfoot is NOT a Neanderthal, but an unwashed Homo Erectus.

Interpreting evolution: H. erectus / H. ergaster / H. sapiens Model of the evolution of several species of genus Homo over the last 2 million years (vertical axis) based on Stringer (2012).[54] Stringer (2003, 2012) and Reed, et al. (2004) and others have produced schematic graph-models for interpreting the evolution of Homo sapiens from earlier species of Homo, including Homo erectus and/or Homo ergaster, see graphs at right. Blue areas denote the existence of one or more hominin species at a given time and place (that is, region). These and other interpretations differ mainly in the taxonomy and geographical distribution of species.[54][55] Stringer (see upper graph-model) depicts the presence of H. erectus as dominating the temporal and geographic development of human evolution; and as persisting broadly throughout Africa and Eurasia for nearly 2 million years, eventually evolving into H. heidelbergensis / H. rhodesiensis, which in turn evolved into H. sapiens. Reed, et al. shows Homo ergaster as the ancestor of Homo erectus; then it is ergaster, or a variety of ergaster, or perhaps a hybrid of ergaster and erectus, which develops into species that evolve into archaic and then modern humans and then out of Africa. Both models show the Asian variety of Homo erectus going extinct recently. And both models indicate species admixture: early modern humans spread from Africa across different regions of the globe and interbred with earlier descendants of H. heidelbergensis / H. rhodesiensis, namely the Neanderthals, Denisovans, as well as unknown archaic African hominins. See admixture; and see Neanderthal admixture theory.[56]

Erm, honey, I know you're old school and raised in Greek and Latin, but when we said it's a show on Homo Erectus, we meant something slightly different.


While i'm not really sure what you are asking, I feel like it is because caucasian people carry genetic markers from neandrithals while other cultural groups carry less or none. It would be a good way to figure out if someone had an english ancestor but they lived in india or somthing.

A receding chin, a bun in the skull, they all look like miniature body-builders ... red hair, for god's sake.

Thank heavens they never subjected Homo Erectus to this circus.

originally posted by: halfoldman
Oh my, how much Homo Erectus am I?
I can't wait for this DNA result.

So why not measure that?


originally posted by: halfoldman
Oh my, how much Homo Erectus am I?
I can't wait for this DNA result.

That is hilarious!
Oh my, thanks for the laugh!

But Homo Erectus, my people, proud ancestry, never made art.

But art on us.

Naked monkey OK, but naked human bad.
edit on 2-3-2018 by halfoldman because: (no reason given) 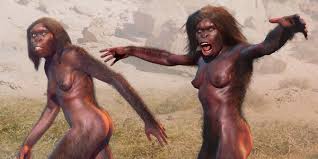 originally posted by: halfoldman
why are so many interested in Neanderthals?

What did they ever do that was interesting


They were able to author this thread!

Run to the Hills!

This is how man got legs!


Evolution at its finest!

Number one: The Neanderthals.

I don't think they had jobs.

So if you bring them back they won't take yer jobs.

What is this monkey business?