Wonder if members on herewill man up and do the same?

Ha! That's a good one. Right wingers will never admit to anything that isn't what they want to believe. Party before well, everything. Every time.

And if it did, it wasn't that bad.

And if it was, that's not a big deal.

And if it is, that's not my fault.

(Stolen from the narcissists prayer, but it's funny how it so perfectly describes Trumpthink.)

originally posted by: Mandroid7
a reply to: jimmyx

Yeah the sm act doesn't apply, neither did the truth in media, or allowing the media to be bought and condensed by Clinton.

All this BS is DIRECT result of those actions.

And, yes, why should I read past anyting after CNN?

Maybe they turned honest this time?


here's a thought....be smart enough to do your own research on the different sides trying to convince you of their own beliefs. have rational talks with people that not only parrot what you believe, but, with people that have different opinions....be cognizant of the possible "good or bad" consequences that might result from actions taken....and always, always find out who makes money and who loses money from those actions

Jesus. That's all you have for a response? Prove it? It's not a proveable or disproveable argument really. What's your problem with my assertion? It's a comment on society and culture more than anything. You want to argue about what, exactly?

You made a claim like it is a fact, then that must mean you can prove it. With evidence. Otherwise there is no point in believing it. Occam's Razor and all. Just because news organizations are private entities doesn't mean they are inherently corrupt. That is a rather LARGE leap in logic.

Also, I won't apologize for not blindly believing what some random poster on an internet forum tells me. Deny ignorance.
edit on 28-2-2018 by Krazysh0t because: (no reason given)

Prove they are not corrupt.

Doesn't work that way. You don't prove a negative. The default position is that they aren't corrupt and you prove corruption. Since being corrupt is a claim. Nice attempt at trying to pass the burden of proof off, but I'm smarter than that.
edit on 28-2-2018 by Krazysh0t because: (no reason given)

originally posted by: neo96
Why was CNN emailing those kids?

Why did CNN provide the debate questions in advance to Hillary through Donna Brazile?

Because they can, and they have legal teams to sort it all out afterward, if exposed.

At CNN controlling and shaping public opinion to fit their overlords agendas is their top priority. Being a news organization is simply a facade.


Twitter bots are the only one backing these liars.

UGH. IF ONLY THAT WERE TRUE. 😡

Out in real-life land, there are many people who still watch and believe CNN and all of the other propaganda TV news and print news.

That should honestly be the last thing you want.

While alternative sites definitely have a place at the table, they’re not even one-tenth as reputable as CNN, FOX, etc...

Part of the degradation and erosion of our news is the fact that these alternative sites are gaining larger and larger market shares so the cable news companies are moving with the market.

I know on ATS there’s a big media conspiracy, and that is likely true to a lesser degree, but it’s a lot easier for a site like Infowars to put out bunk news than it is CNN. These big media corporations have moving parts that the smaller online counterparts could only dream of. It’s infinitely easier to mislead when you answer to a handful of people vs 100 people like the cable news shows do.

I hope that the ball tilts the complete opposite way,. That alternative sites are used as a sort of watchdog group to the big corporations, but that everyone who reads and posts on these sites realizes it’s more entertainment based than reality based.

I suspect the question might have been edited or condensed due to time constraints. That’s normal as well.

Was it switched word for word to be something completely different? Who knows. We don’t have the entire email

How about be smart enough to know they are all fos, and a waste of time to put your energy into.

This is supposed to be a cool conspiracy website, not parrot your side of the msm you think is lying less, because you believe in parties.

It's getting stale real fast.

We only live so long, why spend the time arguing with anons on a website about who is the best or worst liar.

For me to argue with you, is to take from my productivity and quality of life.

I stopped hanging with people who don't share the same goals as me in life, the people who want to suck you down to an argument level, and not move forward with life improving ideas.

It's sad because there are a lot of good brains on here being manipulated, when you could be living the high life.

We could be doing something more productive, like alternative energy experiments, or bouncing buisness ideas off each other.

But let's just be msm slave sheep and take emotional stances toward propaganda.

Not me, I got places to go.
edit on 2 by Mandroid7 because: sp

posted on Feb, 28 2018 @ 01:56 PM
link
So frustrating. Now that Fox news, Jones, Hannity have been using this false narrative for days of stoking the blazing ignorance of his base, they will issue a five second retraction and pretend it never happened.

Except for everything single thing that is aired on live television is read from a script.

Either a paper in front of them or teleprompter.

Let’s run down what happened….

- The Haabs claimed CNN scripted the question that Colton Haab was to ask at the CNN town hall meeting.

- CNN denied it, but the Haabs stick to their story

- Then, apparently the Haabs give CNN permission to share the altered email ‘in a word doc’ (on their behalf) with other news outlets.

“A CNN source provided Colton’s version of the emails, as well as their versions of all of the communications between the Haabs and CNN, to Business Insider.”

See the CNN image credit on both *versions*? 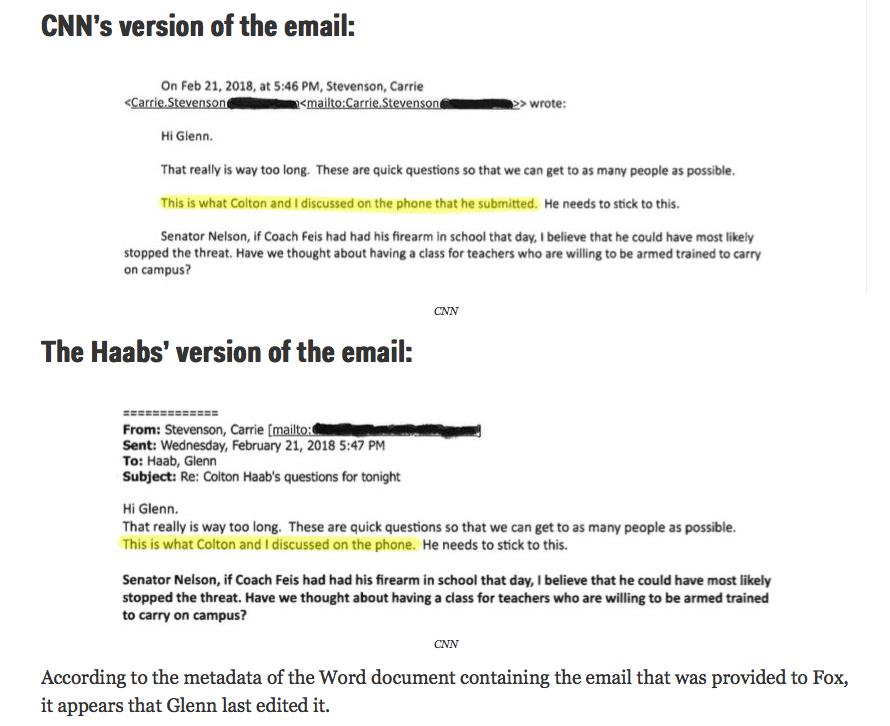 And it’s not just the Business Insider — the Washington Post also claims that CNN provided the alleged ‘doctored’ email:

“CNN has disclosed the email that Carlson’s Fox News program had inquired about. It chops off the part about “that he submitted,” as below:”

And Mediaite reported it this way:

Email exchanges between CNN and the Haab family purporting to show that a CNN producer scripted a question for a teenage student at a recent town hall event appear to be doctored, based on documents that Mediaite has reviewed from CNN. At least two outlets, Fox News and Huffington Post, reached out to CNN to inquire about a possible story.

- CNN commences with their damage control...err...."setting the record straight" — having full control of the story, now — because the Haabs “are not available for comment.”

- NOW, we have an AP story that says:

Glenn Haab told The Associated Press he omitted some words from the email but said he didn't do it on purpose.

"There was nothing malicious behind it," he said.

No direct quote from Glenn Haab other than "There was nothing malicious behind it." No context (what did the AP ask him?), no information on who spoke with him, no clarification on what words he admits to omitting, ...and no suggestion that he admits to any intent to deceive anyone.

Now, I don’t blame anyone for calling Glenn Haab a fraud. If he is comfortable with the *news* painting the picture that he is a fraud…then he deserves it.

But the story, well, it doesn’t make a lot of sense.

Why would the Haabs give CNN a word doc with an email that CNN already had on their end, delete some words first, and then give CNN permission to circulate them?

...as long as Glenn Haab was never directly quoted or implicated in any criminal wrongdoing.

And if you really think CNN was vindicated from a cruel, untrue accusation, then I would say that CNN got their money’s worth.

Oh no! Public speakers write down what they are going to say before saying it! Say it ain't so! This is a practice that has only predate television by millenniums and all, but hey because news anchors do it THAT makes it an "inconvenient truth."

Yeah well that is what they call SCRIPTING.