I think the problem is they will never prosecute anyone of the criminals regarding a corrupt government,the sub government is the one pushing the socialist ideas,and thats what these people did,we are run in fact by criminals behind the scenes

posted on Feb, 28 2018 @ 04:05 AM
link
He's not threatening to shoot him. He's telling him to watch his back commonly used when someone lies and you want to get them back. Stupid for him to post it and yes I think it shows he's worried but not a threat of bodily injury.

originally posted by: testingtesting
a reply to: Jubilation T Cornpone

Do you think that was an actual physical threat?.
It wasn't.


I guess that wasn't a threat that "Pedo-sta" made in the email prior to Seth Rich's death advocating "making an example out of a leaker" either. Following that, Seth was shot in the back ...At least he is giving fair public warning to Jared this time, though. Kudos to him!

Do you know Skippy personally? Can you therefore verify his reasons for posting, and the meaning behind, this tweet? Do you support John "Pedo-sta"?

It was stupid to put out there. Tell me why he did it.

I am going off of precedent with this piece of human garbage. That is all I have to go off of. I don't know him personally. But I DO know threats like this have come from him before. So why would we look at this any differently?

originally posted by: dragonridr
He's not threatening to shoot him. He's telling him to watch his back commonly used when someone lies and you want to get them back. Stupid for him to post it and yes I think it shows he's worried but not a threat of bodily injury.


Yes, you guys do need your boogeymen. Obama, Hillary, and Pelosi. I love that they have such a strangle hold on you guys still. Two of them don't even hold office anymore. LOL!

originally posted by: ignorant_ape
FFS - has reading comprehension been abandoned at ATS now ?

I can't imagine a criminal with as much experience as this guy doesn't know it.
hmmmm. might be time to re visit his leaked emails. this guy is a super creep.

posted on Feb, 28 2018 @ 05:02 AM
link
JP has been so obviously touchy via his social media accounts since PG and now the Q saga... His touchy posts don't help him and add to the validity of his nefarious ways.

Guess he's sweating a bit. Off to Gitmo with youSkippy... 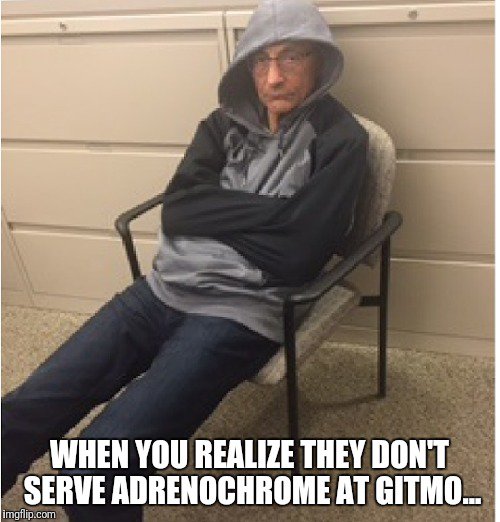 According the brilliant minds here, he is already there...

My thoughts exactly. Establishment or nor, context or not, he should be taken in handcuffs, house searched, and forced to explain his side to the local PD or FBI.

That’s the case for you and me right?

This is EXACTLY what citizens of the US want. (If someone says no, then I bet they want either Trump or Clinton ATM in jail, so I stick by my statement.) Politicians are not above the law.

Not sure you got my message. Podesta (filth) and Kushner (snob, poor filth) are both gonna get what's coming to these amoral imbeciles - too arrogant - matters not political sides-it's all gonna be karma.

I cannot say. Its not happened to me.

Its a headline. Theyre all just headlines.

If Trump can't protect his family, albeit one as compromised as increasing evidence shows, that's pathetic.

His family shows outwardly respect and turns coat on him his behind his back. He really has no support, anywhere.

Wonder if he really reads any tweets but his own.

Is Kelley even telling him what's going on? Not so sure. Wht the he## would he even announce, at this moment, he will run in 2020? Craziest presidency I can remember. Kushner should try to stand as near his Fil as he can-Kusher has failed at everything he has ever touched-let's hope his snooty wife has good insurance-bet she does.

So we have a person making a veiled threat against another with the intent being some sort of bodily damage, due to the kevlar.

Should we expect to see the FBI at his door given the climate?

Scalise wasn't that long ago.

It would be incredibly stupid for someone to tweet their intent to see someone dead. So incredulity should be employed.

originally posted by: Whereismypassword
It is blatantly obvious this is about back stabbing, you must know that expression.

Kevlar is for bullets and knives.
edit on 28-2-2018 by Woodcarver because: (no reason given)