For all of you who say our President was blowing smoke up our arses over his TWEET that he would have gone into the school during the shooting?

Donald Trump apparently stopped a mugging in 1991, according to an old New York Daily News article at the time.

“I’m not looking to play this thing up,” Trump said in the Nov. 20, 1991, report. “I’m surprised you found out about it.” In the incident, Trump ordered his driver to pull over after he saw “a big guy with a big bat” bashing another person. An old copy of the article went viral on Redd


That's the Boss right there!

“Someone in the car looked over and said, ‘Gee, look at that, it’s a mugging,’ ” Trump said. “I said to my driver to stop the car because it was brutal-looking.”

Witnesses told the Daily News that Trump got out of his black stretch limousine on Monday during the assault in Manhattan.

“The guy with the bat looked at me, and I said, “Look, you’ve gotta stop this. Put down the bat,”‘ Trump said.

“A lot of people were surprised that he got out to see what was happening,” Romeo said, adding that the bat-wielder ran off right before he appeared.

Trump then “just looked around and went back into his limo,” she said.

But another witness supported Trump. “All of a sudden, a big long limousine pulls up on an angle, and Donald Trump pops out with the blond, too,” the unnamed witness added. “There was a guy with a bat, hitting a guy over the head, and Trump yelled, ‘Put that bat down. What are you doing?’ The guy dropped the bat, came over and started talking to him.”

The attack wasn’t ever reported to police. Also in 1991, Trump delivered a speech to the House on “economic recovery.” The clip has since gone viral on YouTube amid Trump’s run for president.

He is a Super Hero!

And if not? He's at least a 'real man' who isn't afraid to throw himself into action when someone needs him.

Men and women who accomplish a lot in the New York City construction industry are tough as nails. Donald Trump used that toughness to rise to the top of the industry.

Barack Obama would have rushed in to the High-School, to help too.

posted on Feb, 26 2018 @ 07:24 PM
link
a reply to: silo13
I would take anything that comes from that site as rubbish. And if this was true knowing how Trump brags about himself a lot he would have brought this up. Since that has never happened I call B.S. on this.

edit on 26/2/2018 by scubagravy because: double post but this one had spelling error, go figure

I'm surprised the msm report didn't go like this:

A simple (and I mean SIMPLE) Google search reveals that this really did happen.


Barack Obama would have rushed in to the High-School, to help too.

The archive from Philly.com:
archive.is...

posted on Feb, 26 2018 @ 07:42 PM
link
a reply to: carewemust
In no way on any of those site is there proof that this actually happened. If it did happen then good job Trump for a selfless act. But to be honest since this story is only on hard right leaning websites and nowhere else should indicate something to you.

Your point?
You do understand what a tabloid is, right?

I live in the area. Nothing wrong with philly.com.

posted on Feb, 26 2018 @ 07:54 PM
link
a reply to: BlueAjah If you want to be all technical ya I didn’t use the word correctly. Either way that site is comprised of dribble. But by all means please believe everything you read from dribble sites.

originally posted by: Allaroundyou
a reply to: carewemust
In no way on any of those site is there proof that this actually happened. If it did happen then good job Trump for a selfless act. But to be honest since this story is only on hard right leaning websites and nowhere else should indicate something to you. 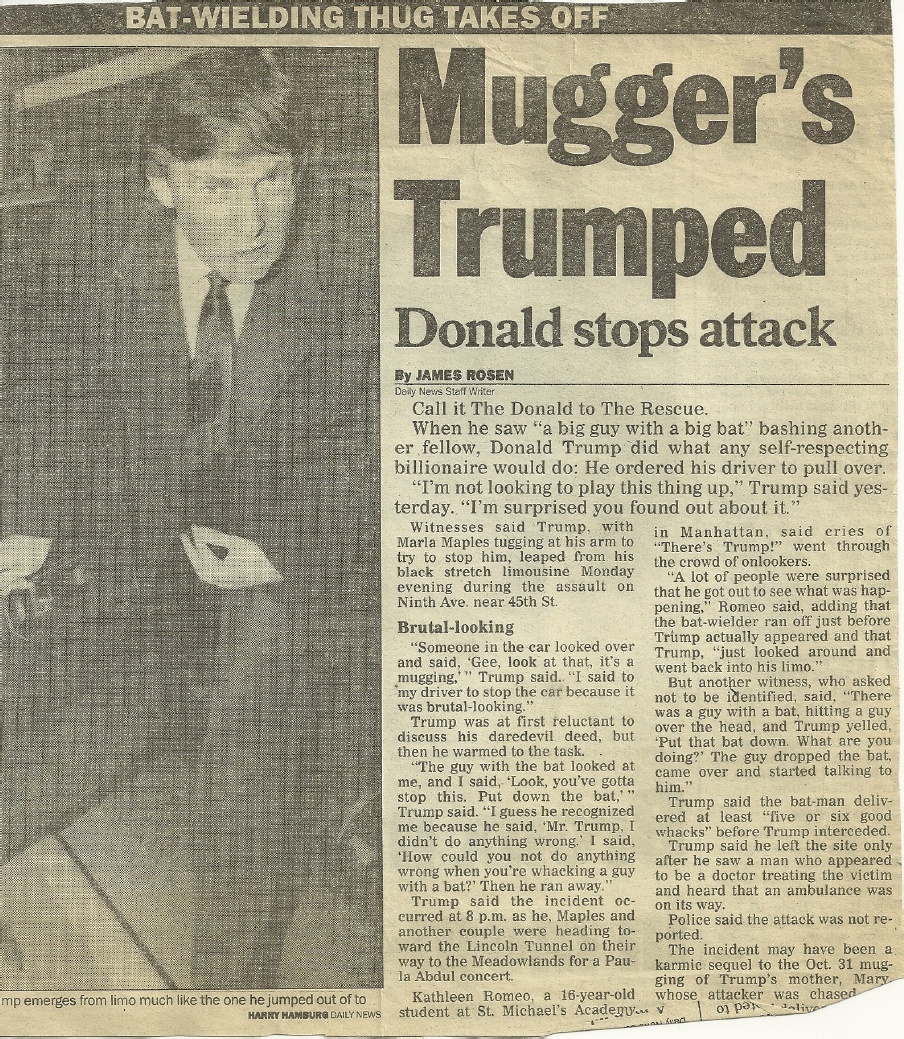 I don't really care about this, but why does it bother you this much? Did you research it first to see if it true or not? Obviously it is true?

Philly.com is NOT right leaning. If anything it tilts left.
The difference is - back then Trump was not a politician. The event was reported just because he was Trump. No partisanship was involved.

originally posted by: Ursushorribilis
So Trump IS braver then the officers who didn't go into the school.


I'm not saying he's 'braver'... I honesty don't believe any of us would know - no matter how well trained - what we would do when the actual moment came down to run into live fire.

My point in posting this? On another thread all I heard was 'what a *P* Trump is' - well, I guess they were wrong.

He didn't have to get out of his limo - he could have just called 911 - or sent his driver - but no, he stepped out, he took action, against a mad man with a BASEBALL BAT.

I don't know about you - but I'd rather be shot than being beaten to a pulp by a baseballbat.

This was around the same time that Oprah interviewed Trump. Well, it was about 1 or 2 years later. But back then people liked Trump. Even Oprah liked him.

People did not start making up fake reasons to hate Trump until he ran against Hillary Clinton. No one called him racist or all of the other names. So, there was no reason to misreport the events in the article.


originally posted by: JinMI
a reply to: silo13

Thus dubbing him with the moniker batman!

There is more than one Batman soooooo it passes the cannon rules!