page: 1
21
log in
join
share:
DerBeobachter
+2 more
posted on Feb, 26 2018 @ 07:26 AM
link
I don´t know if it´s even worth to write a thread that has nothing to do with Trump and/or gun laws, but i will try it anyway. Because the whole western syria propaganda makes me, like millions others worldwide, very angry meanwhile. I even predicted exactly that in a comment to the "Assad gas attack" with allegedly six dead victims, after Macron talked about gas and red lines. Nobody thinks about the fact the gas is a weapon of mass destruction, when we have to read again that allegedly only several people became victims of these alleged gas attacks. Six the last time, now it is even "only" one dead, allegedly. One curiosity among a lot of others, in relation to gas attacks and syria.


"On the evening of February 12, the Russian center for reconciliation received a telephone call from the resident a settlement in the Idlib province, informing them about a forthcoming provocation, using poisonous chemicals, to air it on a foreign television channel. According to the person, on the afternoon of February 12, the al-Nusra Front militants delivered more than 20 bottles of chlorine and personal protective equipment on three cars," the Russian military stated.

February 13, 2018
'F rance will strike' if proven chemical bombs used in Syria: Macron
Such a "coincidence"...

Btw, the White Helmets, together with Al Nusra terrorists, brought the 20 bottles of chlorine and personal protective equipment on three cars to the Idlib province. Exactly the White Helmets which are, together with the SOHR one man show from england, everything the western media seems to need to make the western people dance to their regime changes tunes. Problem is, people meanwhile know everything about the SOHR and the White Helmets. Who funded them, who pays them and who uses them what for. Still they try to fool us again and again with these "credible sources". All the western media is full on "U"S/NATO line, alternative facts are the new reality now.

Just some examples, some of many.

What about the mysterious SOHR?


I am sorry for all the russian links, but "our" warmongering western media wants to tell us only what they want us people in the west to believe, to think.

The SOHR is the creator of the Hama incubator baby lie from 2013. Which was spread by CNN and other warmongering western media outlets inmediately. He is known for his inaccuracy when it comes to numbers of killed people. He is known to hate Assad and his regime. And known for not leaving england for more than 20 years. A man, his hate, his phone and a computer with internet access.

Every, really every little bit they show us here in transtlantic controlled Germany about that syria conflict, all pictures are from the White Helmets and the only other source we have to believe is the SOHR. On every news channel, in every newspaper, everywhere. Only these two implausible sources. Since days they show us the same pictures from allegedly eastern ghouta, White Helmets pictures. Again and again the same three pictures.

But if you visit online mags that still have the nuts to offer comment sections. Like Spiegel Online, for example. I read all the comments there and it was good to read them. From let´s say 100 comments only two didn´t critize, expose the SOHR and the White Helmets as what they are. The White Helmets as a western funded and created organisation, consisiting of Al Nusra terrorists, the "good beheaders". And the SOHR as the most untrustworthy "source" when it comes to syria and the real incidents there.

How desparate the western NATO propaganda machine under control of the "U"S/Israel anti Iran/Syria axis has to be, to still use burned "sources", to make the western people ready for another war basing on lies and false flags. They don´t care about the fact that nobody believes them anymore and that everybody can see and feel the warmongering propaganda game that is played by the neocons, the banks, the hawks, the industrialists, the generals etc. How desparate the war spreading west has to be, to use false flags to start wars, to change regimes and get rid of dictators the west can´t use anymore. And because of other reasons: 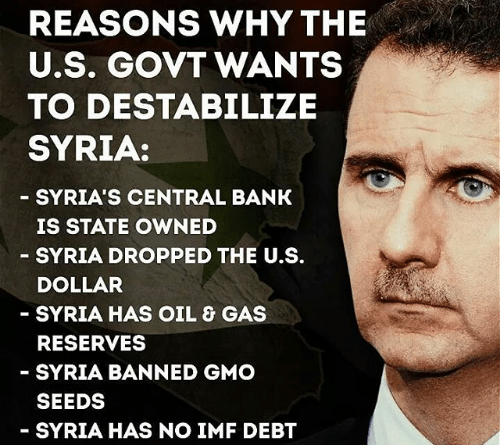 Don´t get me wrong, i don´t think that Assad is an angel. But i also know that the west isn´t full of angels too.
Please forgive me my bad english and all the mistakes i made!
But dear people, do me one favor, don´t believe and accept anything as in stone written truth, anything that comes from sources like the White Helmets and the SOHR. There are reasons enough to see them as what they really are!


Ummm...I totally agree with your entire OP...we might not see eye to eye on some other things...which is as it should be IMO...however...I think your view on the white helmets and SOHR is spot on...

I also agree with your comments about President Assad...

Thank you for bringing this to ATS...

Alot of the evidence you've put up well videos anyway, are from RT which if I'm right (probably not lol) it's funded by the Russian Government or at least in part (checked online and from previous ATS threads gone by) so while I'm sure the white helmets aren't what they claim to be I wouldn't believe much that comes from RT.

I'm so tired of hearing about politics that I've been skipping all of the anti-Trump threads and collusion threads, etc. Thanks for this one. Not sure what the deal is with the white helmets and such, but I can affirm that the media we get on foreign affairs is given out of context and manipulated. It's the same way in foreign countries concerning our affairs. Media has become an opinionated farce and the true enemy of most, if not all, countries.
edit on 26-2-2018 by Thirty6BelowZero because: (no reason given)

The only exception I'd say is The Intercept (most of their journalists anyways).

But other than that, I agree. The mainstream media has no benefit to investigative journalism into our corporate imperialistic wars.


I agree with Al Jazeera, but RT? make some coffee and watch their round table discussions on why America is the worst thing to happen ever. On second thoughts you had better not drink that coffee.

RT-state run news station, the president was with the KGB, Anti Putin Journalists get poisoned...yeeaah better not drink that coffee.

posted on Feb, 26 2018 @ 09:11 AM
link
I don't pretend to know the truth but it is pretty safe to believe the "info" being fed to us by the MSM these days is totally not credible. Also every time they try to pin these chemical attacks on Assad I have to ask myself...Why would he do that? It makes zero sense for him to gas his own people. It makes a lot more sense that it is a false flag by other governments who want him out. I will be watching this to see what happens, I really wish more people would realize what is going on and stop believing the platter MSM keeps serving up. These people in Syria have been through enough already!!!!

after Macron talked about gas and red lines.

I remember another politician saying something of the sorts....

Because the whole western syria propaganda makes me, like millions others worldwide, very angry meanwhile.


But then you go ahead and present all the propaganda talking points.

We know what lies they are spreading. People that read only headlines get a confused picture, all they see on the News is Nikki Haley holding up pictures of dead babies in the UN.

Most of the journalists I see on there (RT) are westerners. Are they all Russian agents in your view?

Notice I use the term "Journalists", not talking heads.
edit on 26-2-2018 by Wide-Eyes because: Clarification.

posted on Feb, 26 2018 @ 11:26 AM
link
The terrorists are absolutely desperate for someone to invade Syria in their favour.

They have lost this war and all international support. They are essentially militarily crippled since Trump stopped sending them weapons and withdrew advisors and the Turkish aid isn't worth jack all.

They are months, weeks maybe, away from the hangman's noose unless someone invades in their favour.

Since they are also as thick as a pound of bricks and their propaganda agency run by the stupidest of them all they can't think to do anything but the same tired old tricks and games that have been seen through by most in the western world. Which is surprising considering how much the MSM promotes these terrorists.
edit on -060011am2kam by Ohanka because: (no reason given)

posted on Feb, 26 2018 @ 11:51 AM
link
I dont believe much of anything about syria. Its another iraq waiting to happen. I bet they have WOMD hidden in bunkers as well

posted on Feb, 28 2018 @ 08:34 PM
link
EU (Mostly German, French and British) supported terrorists are shooting at civilians trying to leave Ghouta! There was no chemical attack in Ghouta at all, unless some of the EU backed idiots had an accident while EU-trainers weer helping them assembly shells with chemical weapons in them.