So are conservatives now getting scared that the IG report isnt going to go the way they thought it would after blasting the airwaves for months?

You may be correct, actually.

As is normal in cases like this where many on the Right, including the Right Wing media, have made very specific claims about something, the closer we get to the conclusion the more they create an air of conspiracy around it.

It's a defense mechanism so that they do not have to admit they were wrong, or bat# crazy, if things do not pan-out the way they hoped.

Hillary's emails were a good example, as well as the Benghazi investigations.

Or it could be that they are right, and are waiting.
If you believe that Hillary, her emails, and Benghazi are a non issue, then there is nothing that can be done to persuade you.

This is not how government is supposed to work.
If you truly believe that Hillary is innocent, there is nothing that anybody could type to make you change your mind.

Obama thought the fix was in.

Obviously Obama was hoping to keep his legacy alive with Hillary in the White House.


The timing is what interests me.


Since Obama started it just days before his leaving, I can only conclude that A) He received new information, B) There was panic involved and criminal activity in the Obama administration.

If there was something so damaging that it would eliminate the Trump presidency before it even started, then I think it would have been used or leaked before Trumps inauguration. Why prolong it and lose your legacy if it was a legitimate case about criminal activity on the part of Trump?


I've seen no such evidence. I've seen people make that claim, but nothing presented to validate such a claim.


The evidentiary items are out there and building. The demotions and reassignments should be a clue. Wray's memo to his agents after McCabe's departure referenced the IG report. Also remember this name: Bill Priestap.

Bill Priestap's role is so central to the investigation(s), that people "in the know" are reluctant to say anything. Good interview here, regarding how important he is to the various ongoing investigations into Obama's FBI/DOJ/Hillary, etc..

According to this one-page Office of Inspector General notice, oig.justice.gov... (PDF), it was President OBAMA's Department of Justice who initiated an investigation into potentially illegal actions, leading up to the 2016 Presidential election.


QUESTION: Why would President Obama allow this high-powered investigation to initiate, unless he felt that info would be uncovered which might unseat President Trump?


Anyway, it was surprising to learn today that this Investigation was launched by President Obama's Department of Justice.


This is the first sentence of the OIG notice:


Department of Justice Inspector General Michael E. Horowitz announced today that, in response to requests from numerous Chairmen and Ranking Members of Congressional oversight committees, various organizations, and members of the public, the Office of the Inspector General (OIG) will initiate a review of allegations regarding certain actions by the Department of Justice (Department) and the Federal Bureau of Investigation (FBI) in advance of the 2016 election.

Taking these words verbatim it appears that President Obama’s DOJ didn’t launch the investigation. It was the “Chairman and Ranking members...”

So that kind of answers your question doesn’t it? Did I miss something?
edit on 24-2-2018 by whywhynot because: (no reason given)

I tried to figure out how to post the ( PDF ) and couldn't figure it out. I sure hope folks take the time to click it in your OP and read it, completely different narrative then what's being peddled by CNN !

While I was trying to find another source for the report I came across this, some interesting insights into the workings of the DOJ ....
oig.justice.gov...

originally posted by: Maluhia
Barack and Hillary were above the law...until Trump won.

And everybody knew Trump had Russian Mafia connections. So, it was pretty obvious they'd believe that the Russians would try to help Trump win.

Personally, I believe the Russians were probably playing both sides of the game, helping both Trump and Hillary.

So, which ever one won, the Russians could always remind the winner that they'd gotten help from Russia, and it's now payback time.

The US does this abroad too, funding both sides of the opposition, to keep themselves in the game. Why not Russia?

Yeah that's the gist. The confusion just comes from the fact that IG Horowitz was an Obama appointee.

As Mountain Laurel suggests for anyone that hasn't, click carewemust's link for more detail/clarification.

I think Horowitz will be a straight shooter. He took a lot of crap from Sally Yates and the Obama admin trying to hink him up and he stood his ground and outflanked the diversions.

On the other hand, he did let Holder off the hook for Fast & Furious while finding others negligent. Maybe that's where he felt the evidence led though.

I'll remind everyone again, however, that McCabe's departure was reportedly addressed in Wray's memo to the ranks as a response to items in the IG report and seem to revolve around altered 302's in part.

Plus you have to keep in mind that the man who runs the DOJ (Jeff Sessions) was known in Alabama as the "Quiet" Prosecutor. He never telegraphed his intentions. It was "Boom!".. just like Mueller is doing now. Mueller isn't catching any big fish though.

If Obama HAD known, then he'd have stopped Trump before Trump had ruined his legacy.

This is administrative whine made from sour grapes bottled by Obama.

That's a good find. It appears that the Office of Inspector General has a lot on its plate. Lots of potential crimes being investigated.


Maxine Waters is scarier than finding green tiger worms in your urine.

No wonder Horowitz is held in such high esteem by both parties. It took GUTS to file a grievance against Barack Obama! 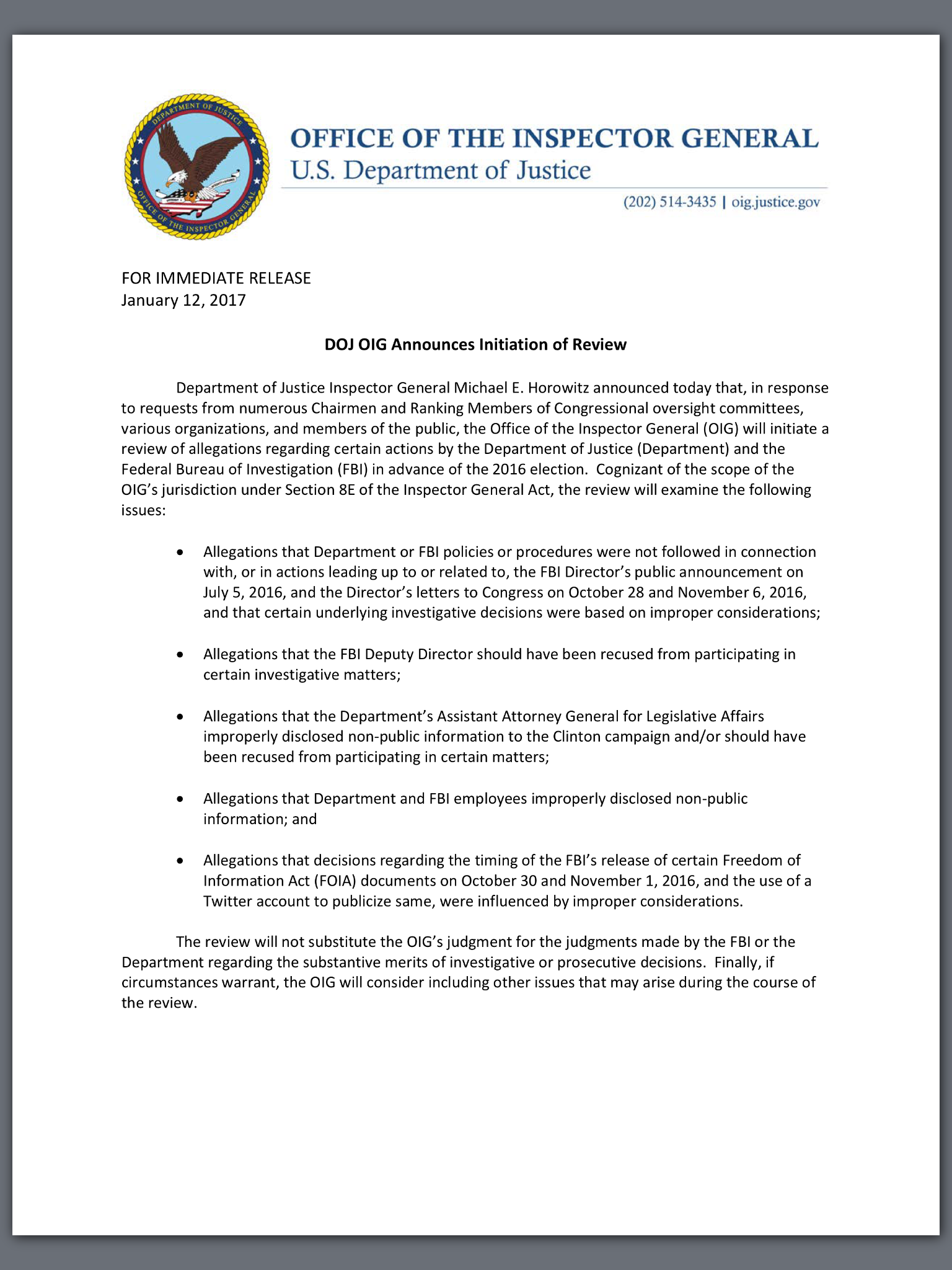 James Comey confused a lot of people too, when he cleared Hillary in July 2016, then helped her lose the election by reopening her criminal investigation.

My understanding is that the OIG's mission is oversight and investigation in general. That is what he's appointed for. Under his overall responsibility he is allowed to follow the evidence wherever it leads when it comes to malfeasance and such.

The suggestions from Congress members weren't the order of a "launch" under their authority but, rather, a request to look into those areas that are under his charter.


I’m just reading the notice. My bet is that the OIG launches it but needs the, lets call it, probable cause coming from the people listed. Justification so to speak.