It happened in Fairdale, Illinois 2015 and Mr Shultz survived but alas his wife and neighbor didn't.
Anyhow I know some of you guys live near places where these can come up so please stay safe.

posted on Feb, 19 2018 @ 04:48 PM
link
It's scary just how fast it happened, he probably didn't think it would go over the top of him until it was too late. The silence afterward is the creepiest part. Total destruction then just... silence. Very scary.

the video is frightening. knowing that people passed away made this all the more intense.

posted on Feb, 19 2018 @ 05:45 PM
link
Awesome footage. Really captures the ... er , awesomeness. Growing up in Illinois, I saw a few monsters... closest one was heading towards us, decided to jump up and missed our block, then returned to the ground a quarter mile away and tore up a forest preserve.

I remember being stupid with my brothers and vacating the basement to see it when it left the ground... our folks were gone that day. We watched the funnel travel over us, and it had lightening and debris dancing around the walls... one of the coolest sights I've experienced... and nobody died that time.

My uncle was working at a convent in the 90's and had a nun by the hand, pulling her into the storm shelter as a twister approached, but the wind was stronger and wrenched her up and away, killing her and depositing her body a couple miles away. Some poignant statement about religion might be made... if one was religious.

Love tornados... because they are terrifying.

posted on Feb, 19 2018 @ 07:18 PM
link
I would not want to be in a position where I couldn't mute that kind of noise. Would not want to experience that IRL for over a minute.

posted on Feb, 19 2018 @ 07:24 PM
link
30 seconds between the tornado being on the horizon and being above his house. The actual swirling vortex is 3x the radius of the dust funnel, so you don't see the air spinning round until debris is picked up.

So his wife died while he was filming. Wonder how long it took him to look for her. he probably couldn't have helped her to a safe place since he didn't have sense enough to find one.

Tornado's are like monsters from hell. They even look evil.

posted on Feb, 19 2018 @ 09:45 PM
link
My god.
I don't understand the mentality of sticking around for so long.
God rest the souls who perished while he got "a really good action shot".
Terrifying... and a little numb-brained on his part.
So sad.

I lived in Findlay and Collinsville for yrs.

And I lived in Texas, CO, WY, North east and FL.

I walk through typhoon 8's now.

that would have been a literal waking nightmare...

Clem Shultz is who filmed this. Now 88 years old. Ironically the fact he was on the second floor is what saved his life. His wife was in the kitchen below when the house collapsed and she unfortunately died. He said he thought the tornado was going to stay south of them but by the time he realized it was on top of them it was too late.

His dog (pictured) ran from from the storm and was lost for 2 days until he was reunited with Mr. Shultz.

Some people can call this man ignorant for what he did but I get it. I've seen twin tornadoes over an ocean once and it was mystical, magical, and terrifying all at once. Impossible to peel your eyes away from it.

This video is terrifying but man does Clem Shultz have balls the size of trucks to stay as focused as he was. 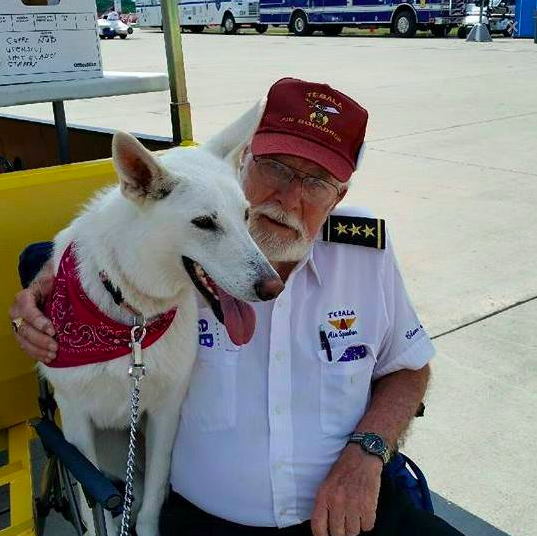 originally posted by: Slinki
My god.
I don't understand the mentality of sticking around for so long.
God rest the souls who perished while he got "a really good action shot".
Terrifying... and a little numb-brained on his part.
So sad.


The only place to take cover would have been a basement. Those homes probably didn't have one. Next place is inside a metal bathtub. But those 2x4's end up travelling at 200+ miles an hour, so can punch through brickwork and chipboard. Cars, trucks and mobile homes can be lifted up. There just isn't anywhere.

That crazy guy who was building fallout shelters out of old school buses doesn't seem so crazy now.