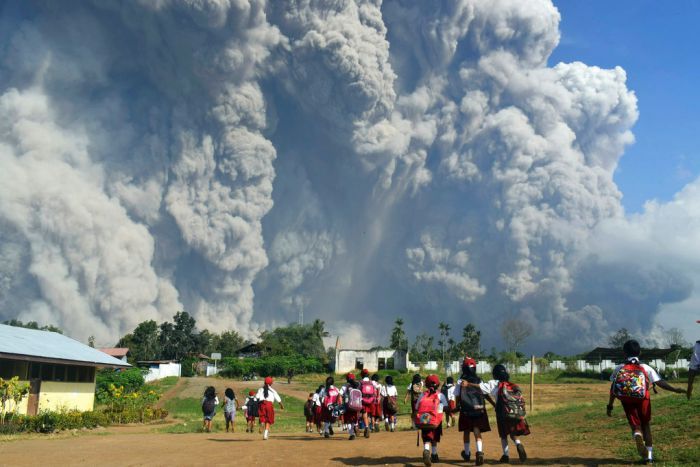 Mount Sinabung on the Indonesian island of Sumatra has shot billowing columns of ash more than five kilometres into the atmosphere and hot clouds down its slopes.

The National Disaster Mitigation Agency said there were no fatalities or injuries from the eruption on Monday (local time).

The volcano, one of three currently erupting in Indonesia, was dormant for four centuries before exploding in 2010, killing two people.

About 30,000 people have been forced to leave homes around the mountain in the past few years.

Maybe I wasn't paying attention before, but seems like every week something new comes up, Earthquake or Volcano activity...

Also, Mexico was rocked by a new 5.9 ~ 6.1 (different sources) Earthquake today. No injuries or deaths so far.


Ummm...what I want to know is...why are all those people running...towards the erupting volcano...?

That was literally my thought as well. But then I guess per the source they all lived so maybe a perspective trick.

The black and green circulars represents the affected areas. 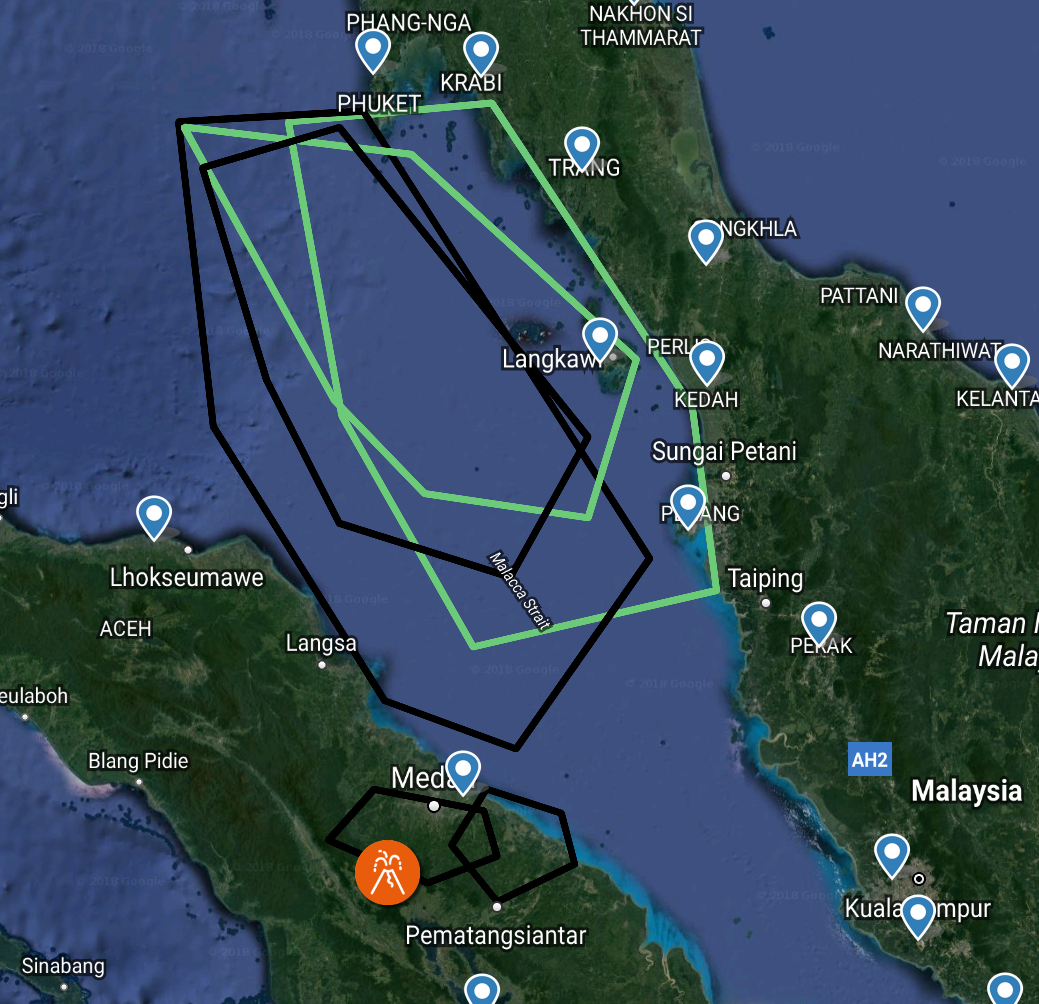 Flights that are scheduled to arrive at Medan Kuala Namu intl. Airport are cancelled.

Departures are good to go.

I think its important to understand the terminology we are using to describe situations. For example, what you think of when you use the term "breakdown" may be very different to what I think about when I see it written on this screen.

You ask whether we think we are approaching a "breakdown" on the pacific rim...

Well, that requires some clarification, before a sensible answer can be devised. Are you concerned about the structural integrity of the Pacific plate itself, or any of the surrounding plates? Is your concern that one or more might fracture along their length or breadth, and begin to sink down into the boiling guts of the Earth? If that is a concern, well, I think we can probably rule that out, largely speaking.

However, if you meant something else, then you might need to be a bit more specific about your concerns, before anyone can offer any input, for good or ill.

Its possible that the only road away from where they were (which, considering the uniforms worn by the children, may well be some kind of educational facility), to the nearest route of escape, leads initially toward the cloud of super-heated, pulverised rock and ash, before veering off rightward, or leftward.

I meant a breakdown in the sense of the pressure accumulating and, eventually, something really BIG exploding. If this happens, it could make the north hemisphere, or a part or it, inhabitable for a while...

You're welcome, be mindful that the arrivals for the next day are subject to change.

Ummm...what I want to know is...why are all those people running...towards the erupting volcano...?

Maybe they were running to their surfboards so they could catch a wave on the pyroclastic flow.

I see what you are saying. You are concerned that some huge release of pressure, could cause unprecedented volcanic and Earthquake activity, any one of which could potentially cause tsunami waves of significant magnitude, which might threaten coastal locations exposed directly to threat from the pacific region, and any such activity that might happen there?

Well, I can definitely see where you are coming from on that front.

Either a quake, or a volcanic eruption of a specific nature (for example, one which splits a mountain close to a shore line, dropping billions of tonnes of material directly into a lagoon, causing a giant tsunami wave), near to the sea or in the right (wrong) place, could lead to heavy loss of life, devastation of waterfronts, and send a wave penetrating deep into any large landmass, making the threat more than just a coastal problem.

Also, BIG volcanic eruptions have the potential to single handedly cool the planet by entire degrees within the space of a year, because of the sulfur released in aerosol form and the way it behaves when exposed directly to the atmosphere. In times past, events like these in the Pacific Rim area, have led to masses of human deaths, purely from starvation caused by failed crops. There are examples of such from the 1200s, where mass graves in London were located which were of that age, starting a search for a cause of death that ended on a remote Indonesian island, which featured a large caldera, with a new, smaller volcano inside of it, but which had, during the timeframe involved, been a much larger mountain, which detonated, spewing ash and sulfur into the atmosphere...

But it did not just screw up the Northern Hemisphere. This detonation occurred on the equator, and the volcanic fallout was dispersed across BOTH hemispheres of the world. Ash deposits were found at BOTH the North and South poles, which correspond directly to that event.

If something like that happened today though, would the consequences be as far reaching? In those times, we had no grid based power systems, and only rudimentary methods of keeping warm. Nowadays, although it can be expensive, I doubt the cold would be killing anyone. Also, our plants these days, specifically our crops, are hardier than they used to be, mostly as a result of meddling by bioscientists. Virus resistant, pest resistant... They MUST have done something to make food crops somewhat more resilient against unusual spikes or troughs in temperature as well... plus, we have totally different farming methods than we used to, especially in the developed world.

All in all, I think it would definitely ruin some peoples travel plans, I think it would change peoples holiday arrangements and their preparations for winter. I think we might go without a summer or two. But I do not think the havoc would be quite as significant now, or the global death toll for that matter. We have more information now, hydroponics is a thing... We have more strings on our bows now than used to be the case, and I think that would increase the chance of survival for more people than has previously been the case, in these world wide events.

Duh! I live in the NORTHERN Hemisphere, and it's quite inhabitable, thank you. Did you mean to say UNINHABITABLE?

I think that to the extent that these posts are searchable on the web, we all need to put brain in gear, before hitting the keys. Spell Checkers help, but are no panacea. Your basic premise is very accurate, though. Dr. Lowenstein of the Yellowstone Volcano Observatory is tracking the effects of a very large 530 AD eruption of Krakatau, in present day Indonesia. He feels this is what hammered Europe into it's DARK AGES. Maybe not, but it surely didn't help with their agriculture.

There are so many souls needing food and clothing, that a really big 530 AD eruption anywhere in the South Western Pacific will cause massive starvation, across the Northern Hemisphere. And if Canada and America cannot export any food grains, then this will spread all across the World, for a few years. We're living in the Zenith of an inter glacial climate period, so almost anything and everything, dished out by volcanoes will be deleterious for our agricultural industries.

BTW, those kids all have school backpacks on. I bet that they're going over to a school house, for some food and safe spaces. Better to have them all in one place if evac becomes necessary.

Yeah... English is not my main language, so my apologies if I caused any confusion to your understanding.

Last time it went off, wasn't it louder than a Who concert?

Life sucks then ya die.

Most of the population in the world now, wouldn't know how to survive an event like this.

They’re checking it out man.

Probably doesn’t make a difference whether you move a 100 ft this way or that way.
edit on 2-3-2018 by nOraKat because: (no reason given)

The real challenge now is to deal with all the ash.