As the Ellen Nakashima reported, the application to wiretap Page did disclose that one of the sources of intelligence to generate suspicion that Page might be acting illegally came from a political source. It was mentioned in a footnote on the FISA application. Nunes was asked about this on Fox & Friends. He did not deny the point. Instead he insisted that it wasn’t good enough because the disclosure was merely a footnote. “A footnote saying something may be political is a far cry from letting the American people know that the Democrats and the Hillary campaign paid for dirt that the FBI then used to get a warrant on an American citizen to spy on another campaign,” the distinguished Republican explained.

First it was "The FBI lied about the Steele dossier" and now it's "the FBI did not highlight the truth about the Steele Dossier in the part of the application we bothered to read". Get this, there's even talk of more memo's being released. What? How long are we going to carry out this charade? Long enough to distract for Trumps full term?

And the circle jerk continues on I suppose.

Let's recap on how far we've come. Whitehouse Anonymous, Benghazi, Emails, Pizzagate, Bitherism, Uranium One, Qanon, The Memo and so on and on and on.

I just played that clip like twice, and dont see how it helps your cause in the slightest.

Hehe, could you do me a favor, and squiggle a little harder, there, precious?

So in other words, you're saying it would have been better if he Nunesed it?


If the memo and Nunes's penchant for grandiose claims are any indication, you're in for a long period of getting your hopes up, followed by a lot of disappointment and then years of you feeling like somebody got away with something.

Hillary & Obama bought and paid for a FISA warrant on a political opponent.


At the end of the day, that's all that needs to be said.

You choose to be complicit? The fact is- there was significant issues, and suggesting that there may have been politically motivated impudence is an excuse for nothing

posted on Feb, 6 2018 @ 07:15 AM
link
The shills have been working overtime to deflect on the issue. It is pretty interesting to see them twist things around to suit their own agenda.

Its now known that Obummer weaponized the institutions for political gain.

Can't speak for anyone else, but this ride sure doesn't feel interesting to me anymore. I don't know what kind of requirements are in place for disclosing the above mentioned information in the warrant, but don't you think this exonerates the FBI a bit? Having something in a footnote is different from keeping it a secret. The footnotes are there for a reason anyway, to be read, not just to up the word count.

Isn't this exactly what some people have been saying; Nunes was cherry-picking facts and impressions from a document that we aren't allowed to see? There's so much at stake, I don't think Nunes would be able to resist spinning this as far as he dares, even if there is real proof in the secret papers. But yeah, all we can do is wait for more information to trickle out.

So as long as they left no evidence of spying on the Trump Campaign, we'll just take their abuse of powermongerer words for it that they never actually did. Even though they manipulated the law to get themselves a de facto green light to run ops in that direction. Dont forget how desperate they were to keep the entire tale of mere Carter Page alone classified 'forever'. But, this "Secret Society", we'll just trust them.

It's already been decided what is true with absolutely no evidence presented.

Personally I assume everyone is lying or embellishing the truth until further proof is actually released.

Those who understand fisa know it's a rubber stamp.

I don't trust Devin Nines because he has been defending spying and fisa his whole tenure.

Justin Amash was "as good as working for AL queda" for trying to prevent surveillance abuse now I am supposed to believe Nunes cares about transparency.

But hey its working. Democrats and Trump supporting republicans have full belief in the word of the liars presenting their points of view.


Those who understand fisa know it's a rubber stamp.


That is what makes this peculiar, a warrant was actually denied. That does not happen often.

I don't think you listened to what Nunes said during that 7 minutes, and I fail to see just how a footnote changes the fact that the memo is a 'nothing-burger' to begin with. 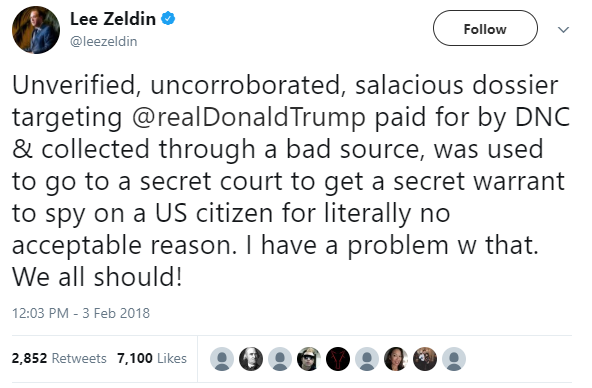 Yeah, the "secret society" thing was walked back and abandoned by its promoter once the additional texts revealed that they were joking in reference to of all things, gag gift Vladimir Putin calendars.

The really ironic thing is that the text messages were given to media, including right-wing outlets like Fox News, a month before Johnson embarrassed himself. They read them, realized it was a joke and ignored them for a month. Then this moron Johnson comes out with a cherry-picked portion and tries to pass it off as evidence of a secret society whose members refer to it as "the secret society" (which you're smart enough to know is stupid af on its face).

All of a sudden, they pretend like Johnson had found a smoking gun when the reality is, they *had* to know that it was all bull#.

Yet, you're still making references to it so despite its limited run, that conditioning seems to have worked well?
edit on 2018-2-6 by theantediluvian because: (no reason given)

I do know that Nunes and schiff are absolute scumbags. So not really just going to hang of their opinions.

I've got a hypothetical scenario for you:

You open your credit card bill one day, and find you've been hit with a massive interest charge, even though you always pay your bill on time. You call up the CC company, and their rep tells you that there's a clause buried in the fine print saying that, once per year, they can level any amount of interest they deem appropriate.

Would you be happy with this arrangement? Because to me, burying a statement in the footnotes that talks vaguely about "political entities" being involved in the memo is not much of a disclosure. It certainly doesn't mean they told the court that the DNC and Hillary's campaign paid for the creation of the dossier, even though the FBI knew this was the case at the time.