posted on Feb, 3 2018 @ 04:07 PM
link
Firstly, I feel bad for the child- I hope she is able to lead a "normal" life after this. Secondly, do people really believe voodoo rituals work? How did they know it was a demon inside the girl and she wasn't just behaving like a 5-year old child? I hope the people who did this to her get more than mental-health treatment, they need to be locked away forever.


Two women are accused of burning and permanently disfiguring a 5-year-old girl during a voodoo ritual. Police said the ritual was meant to remove a demon inside the little girl that was causing her to misbehave, the Associated Press reported. The little girl’s mother requested the ritual, according to police, and has not been charged but is receiving mental health treatment. The mother is of Haitian descent, according to the report, where religious voodoo has been practiced for centuries. The two sisters — who said they’ve performed the “cleansing baths” before and that children are sometimes burned as spirits leave their bodies — also threatened to cut off the head of the girl’s 8-year-old brother with a machete, according AP. The boy said his sister was held down twice as the women blew fire over her face, cut her arm and collarbone area and poured something in her eyes that stung, according to the report. 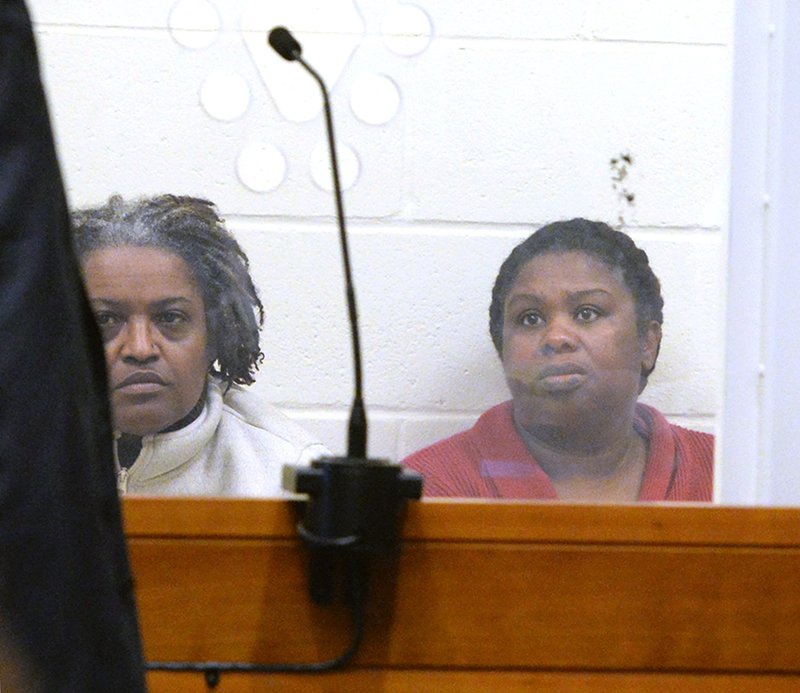 Rachel Hilaire and Peggy LaBossiere on Feb. 1, 2018 in Bridgewater, Mass. (accused)
ETA: The creature on the left just might be a demon! (SCARY!!!)

Haitian Vodou Wikipedia Vodouists believe in a distant and unknowable Supreme Creator, Bondye (derived from the French term Bon Dieu, meaning "good God"). According to Vodouists, Bondye does not intercede in human affairs, and thus they direct their worship toward spirits subservient to Bondye, called loa.[13] Every loa is responsible for a particular aspect of life, with the dynamic and changing personalities of each loa reflecting the many possibilities inherent to the aspects of life over which they preside.[14] To navigate daily life, vodouists cultivate personal relationships with the loa through the presentation of offerings, the creation of personal altars and devotional objects, and participation in elaborate ceremonies of music, dance, and spirit possession.[15] Vodou originated in bani, Nigeria, Africa and developed in the French Empire in the 18th century among West African slaves when African religious practice was actively suppressed, and enslaved Africans were forced to convert to Christianity.[16][17] Religious practices of contemporary Vodou are descended from, and closely related to, West African Vodun as practiced by the Fon and Ewe. Vodou also incorporates elements and symbolism from other African peoples including the Yoruba and Kongo; as well as Taíno religious beliefs, Roman Catholicism, and European spirituality including mysticism and other influences.[18] In Haiti, a very small number of Roman Catholics combine their faith with aspects of Vodou. This practice is denounced as diabolical by virtually all Haitian Protestants.[


The mother is of Haitian descent

I think coming from a cultural heritage where the average IQ is well under 70 kinda covers this story...

My money is on her not being a brain surgeon...


The two sisters — who said they’ve performed the “cleansing baths” before and that children are sometimes burned as spirits leave their bodies — also threatened to cut off the head of the girl’s 8-year-old brother with a machete,

posted on Feb, 3 2018 @ 04:31 PM
link
Any religious ritual which harms a child should be banned or put off til the child can make there own minds up.
Things like what happened here has gone on for years and still does when people think mental illness equals possession.
I have seen the damage so called exorcists can do to the mentally unwell.
I hope the women get serious time and hope the young girl makes a full recovery.


A sick and backwards practice of yet another religion based on torture and death.

Too bad some people alive today could be outwitted by a cave man.

What the #### is wrong with people nowadays.

What are you implying about Haiti?

Yeah, because voodoo is representative of religion generally.

indeed... we've got our own fair share of christian 'faith healers' in the US who cut and burn and smother, as well as folks too religious to take their diabetic kids to doctors.

all six of their diabetic kids?

all six of their doctors?

all six of the voices in your head?

what are you talking about, willis? :/

originally posted by: slider1982
a reply to: seattlerat
I think coming from a cultural heritage where the average IQ is well under 70 kinda covers this story...


This is basically the reason. Just the other day I saw a story about a man being beaten by an angry mob who believed he turned someone into a goat... Just because the goat followed him as he was walking.


These things mostly only happen in parts of the world where the average person scores as mentally retarded on the IQ scale. There's a reason you don't see mobs of angry Canadians beating people to death for allegedly putting magic shape-shifting spells on other people to turn them into animals.
edit on 2/3/2018 by trollz because: (no reason given)

posted on Feb, 3 2018 @ 06:49 PM
link
What you expect someone to be forced into using imperial colonial medicine?

posted on Feb, 3 2018 @ 06:58 PM
link
Man, whatever happened to just smacking somebody on their forehead, watching them fall and say "you are now healed!!"

i think you're reading into my post a bit.

i certainly hear several stories per year about someone doing something deranged with or to their kids in the name of christian faith, here in the US. they're not on every corner, but stack that up against the one story in the OP? i don't think any country or faith has cornered the market on stupid crazy people.

posted on Feb, 4 2018 @ 06:07 AM
link
Backward cultures do backward things. What can you say except to despair at the misguided cruelty of some people.

posted on Feb, 4 2018 @ 01:25 PM
link
Evil begets evil. Voodoo is a type of black magic. Black magic just makes it worst. What you need is light magic which has been lost.

originally posted by: testingtesting
Any religious ritual which harms a child should be banned or put off til the child can make there own minds up.

I can’t believe I missed this. I used to live in that Town years ago.


Just a few days ago a mother in Brockton, MA stabbed her two youngest sons to death, over 50 times, and told police it was a voodoo ritual.

That is just sad.