Schiff, the ranking Democrat on the House Intelligence Committee, made the claims in a letter to Nunes, accusing the committee chair of making "substantive" changes to the controversial memo before sharing it with White House counsel for release.

Those changes, Schiff said, were not approved by the full committee as protocol dictates.

I'll be back shortly with images of the letter. 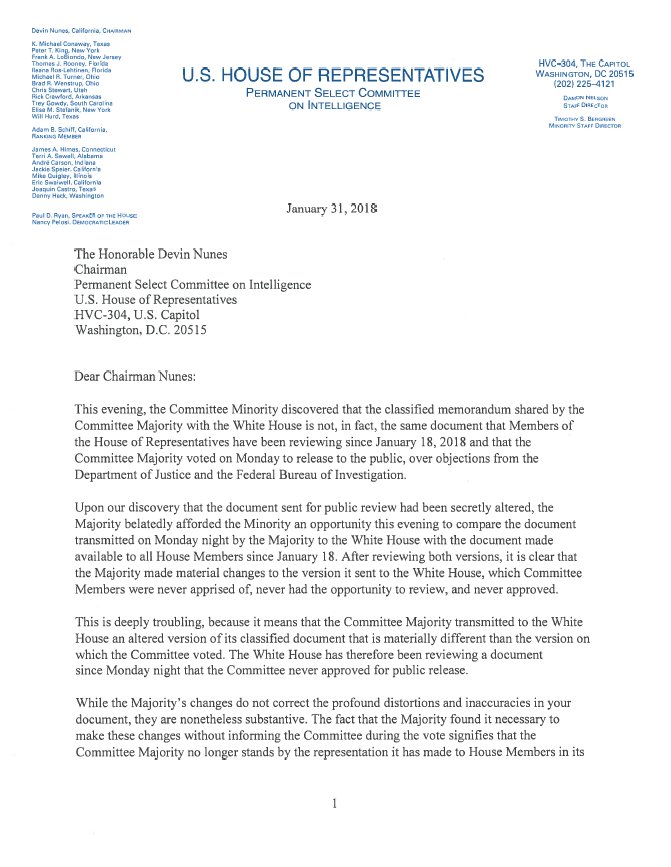 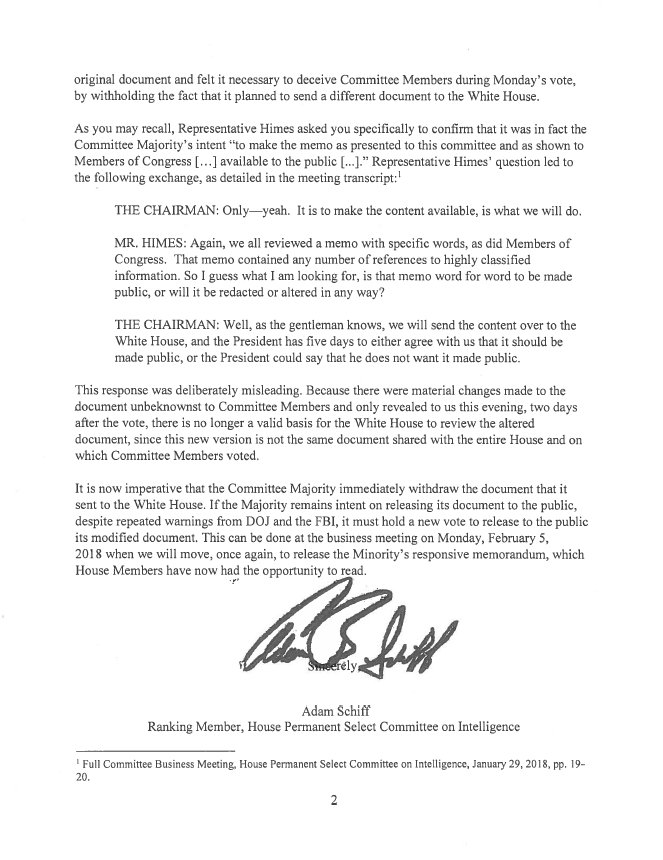 posted on Jan, 31 2018 @ 09:42 PM
link
If thats true, this whole thing reeks..real bad. That would be classified info that Nunes is tampering with, im not sure even he'd be that naive unless someone was telling him to do it.

The Memo was rewritten due to consultation with FBI agents.

Lou Dobbs: Our chief correspondent at the White House, John Roberts, telling us that the new version of the memorandum has been altered in some ways by the White House review.

Five professional members of the FBI were at the White House to meet with the Chief of Staff John Kelly to got through that. www.thegatewaypundit.com...

He is outright lying on this one.
edit on 31-1-2018 by burntheships because: (no reason given)

I'm sure this won't bite him in the ass. Keep up the good work Nunes!

Isn't this the definition of a gambit from either side?

Schiff alleging that the memo is not the same would result in a delay.

posted on Jan, 31 2018 @ 09:49 PM
link
this dog and pony show is getting old. does anyone have one lick of respect or trust for anyone on either side of this debacle? i know i dont and the more i watch it the more i want both sides razed to the ground

posted on Jan, 31 2018 @ 09:50 PM
link
Some odd things happened today, ranging from the republican train crash to now this last ditch effort to block the document being released... I wish Trump would just release it, allow some public light in and lets begin restoring the DOJ/FBI from this blatant corruption.

The Memo was rewritten due to consultation with FBI agents.

originally posted by: jhn7537
Some odd things happened today, ranging from the republican train crash to now this last ditch effort to block the document being released... I wish Trump would just release it, allow some public light in and lets begin restoring the DOJ/FBI from this blatant corruption.

White House says it's being released tomorrow. President will be at the Republican retreat to discuss strategy. Maybe it will be released ahead of that meeting.

Adam Schiff is just running the last leg of interference.

The DOJ is investigating Andrew McCabe for his role
in the Insurance Policy.

originally posted by: whywhynot
Last minute desperate move by the D’s in an attempt to keep the citizens of the US in the dark.

posted on Jan, 31 2018 @ 09:57 PM
link
The fact that Schiff is this nervous tells me that what is in this memo is most likely true.. If it was a lie he wouldnt care and would push for it to be released, knowing that the truth would likely come out and the GOP would look bad...

originally posted by: trb71
If thats true, this whole thing reeks..real bad. That would be classified info that Nunes is tampering with, im not sure even he'd be that naive unless someone was telling him to do it.

the more i watch this the more its starting to feel as manufactured as the russian dossier. if nunes is altering things in an illegal manner id love to know who is pulling his strings. i just keep hearing admiral ackbar ringing in my head lately, "its a trap!!"

originally posted by: trb71
If thats true, this whole thing reeks..real bad. That would be classified info that Nunes is tampering with, im not sure even he'd be that naive unless someone was telling him to do it.

Yep, if they are changing it inbetween people viewing - thats not good.

I dont believe yet they're changing it for nefarious reasons, but lets wait and see. Many people (myself included) are hoping this memo is the start of the corruption exposure

By now enough has leaked out that we if we put it all together, we probably already have a good idea what the "shocker" is supposed to be:

The FISA warrant application for Carter Page contained (in some part) information given to the FBI by Christopher Steele, which later appeared in the infamous dossier and that the FBI/DOJ officials failed to adequately explain the origins of that information.

It's also been reported the memo mentions Rod Rosenstein signing off on the application for the extension of the warrant.

What we need to know is what's in the FISA warrant application. Just some of the questions:

Which one would you have them release at present?

Testifying in November before the House of Representatives Intelligence Committee, Page said he met with Russian government officials during a July 2016 trip he took to Moscow while he was a foreign policy adviser to Trump’s campaign. He said he made the “benign” visit as a private citizen, according to the interview transcript.


The memo contends that the FBI and Justice failed to tell the judge that the request was based on a dossier compiled by a former British spy hired by a research firm partially financed by the Democratic National Committee and Democrat Hillary Clinton’s presidential campaign, the sources said.

Team Left colluded with a foreign intelligence company and spy to write the dossier.

That's fine if they want to go down this road.


The President may authorize, through the Attorney General, electronic surveillance without a court order for the period of one year, provided that it is only to acquire foreign intelligence information,[5] that it is solely directed at communications or property controlled exclusively by foreign powers,[6] that there is no substantial likelihood that it will acquire the contents of any communication to which a United States person is a party, and that it be conducted only in accordance with defined minimization procedures.[7]

A trip was their 'probable cause'.