Japan Hit By Earthquake Off Coast Of Honshu, Day After Alaskan Quake

posted on Jan, 24 2018 @ 07:46 AM
link
Seems like the "Ring Of Fire" is starting to fire up around the planet. In the past week we've had volcanic eruptions and earthquakes. On Monday afternoon, Mount Mayon, the Philippines' most active volcano, erupted for eight minutes, causing the evacuation of more than 50,000 people. This past Tuesday there was an eruption of Mount Kusatsu-Shirane in central Japan, that also triggered an avalanche. Also that day, a massive, magnitude 7.9 quake hit the Gulf of Alaska, which triggered tsunami warnings for Alaska, as well as the US and Canadian west coasts.

A day after a massive earthquake near Alaska sparked tsunami alerts for the U.S. West Coast, a magnitude 6.2 quake was reported early Wednesday off the coast of Japan, officials said.

The U.S. Geological Survey said the quake hit at 9:50 p.m. local time about 64 miles northeast of the island of Honshu, at a depth of about 24 miles.

Is California at risk for a big quake? Nearly three weeks ago, they had a number of small tremors strike along the San Andreas fault line.

In the last 48 hours, the southwestern State in the US has been rocked by eight tremors, according to the US Geological Survey (USGS). All but three of the tremors have come along the San Andreas fault – a deadly line which runs through California and is one of the most seismically active regions in the world. The strongest of the quakes came in Berkeley, near the east coast of California, which measured 4.4 on the Richter scale.

Thomas Jordan, head of the Southern California Earthquake Center, told the Los Angeles Times last year: “Any time there is significant seismic activity in the vicinity of the San Andreas Fault, we seismologists get nervous. “Because we recognise that the probability of having a large earthquake goes up.”

Well, what's the "probability" now of a large earthquake hitting California with all these volcanic and seismic events taking place along the volatile "Ring of Fire?"

Seems like the "Ring Of Fire" is starting to fire up around the planet.


Thats why they call it a ring of fire. Activity is strongest at Plate boundaries.

I could list all the quakes and volcano activity in that huge 'circle', tens of thousands of miles in circumference in the last ten years. But whats the point, there were hundreds, as usual.

But only one Japan and Indonesian level disaster.

Are we skittish, bored, or clicking for views...

Unless we put aside our nuclear weapons, which we are not doing.
edit on 24/1/2018 by vinifalou because: (no reason given)


It is definitely disconcerting how few people know what is going on, in terms of natural disasters etc. By design of course, as a society we have been massively dumbed down. Call it an agenda, but people won't worry as much when ignorance is bliss - so they are succeeding.

However, these kind of events are not all that rare unfortunately. And i'd hold off on jumping the "something weird is going on" train and ride this out. I'm sure things will settle.
edit on 24-1-2018 by MrConspiracy because: (no reason given)

Interesting, never heard about him and hardly anything in English can be found about him on the web. With the exception of a thread you created a bit more than a year ago. That currently has 50 flags. Must have missed it at the time. Well now it has 51 flags. I will read it later but if anybody else is curious here is the link:

We need to talk about Chico Xavier's predictions in 1971

Probably just reporting yet another event, but we should all just go back to big brother or the tennis.. or better, trump posts.

Thanks OP, even if this is a mundane event, the Ring of Fire as it is should have eyes on it. Being, you know, a well known hot bed of activity.

Your skewing fact to fit your opinion,makes it more believable when you use actual facts,there have been earthquakes since recorded history,before nucleur weapons,and the fires here didn't start from under the ground,.no matter how hard you try

Scientists who know more than you or me, are saying that a large quake hitting California is long overdue. It's OK that you don't think all this activity in the last week is "abnormal," but it is making news. There was another quake today, so what's the problem you have with me posting about it? Here have a read, maybe the guy with a PhD was feeling skittish and bored yesterday:

Tuesday, January 23, 2018, 8:52 - On November 7, 2017 a 3.2 earthquake shook Los Angeles in the middle of the night, waking-up residents and lighting up thousands of alarms on local social media networks. According to the USGS the epicenter was 7.5 miles deep and centered in the West Athens area, not far from Los Angeles International Airport.

And as recent as January 23, 2018, a magnitude 7.9 earthquake off the coast of Alaska triggered tsunami warnings up along the entire West Coast. All this recent activity has brought up the same question locals ask year after year when the ground shakes: What if California was hit by an 8.2 quake like Mexico?

According to Southern California Earthquake Center director Thomas Jordan, the most famous fault in the world has been quiet for a long time, too quiet, and is now "locked, loaded and ready to roll".

Here's a graphic from today's USGS website. See all the yellow circles? That activity occured over the last 2 weeks. The orange circles show activity from yesterday, the red circles are today's activity. I'm no expert, but "the point" is, there sure seems like a lot of recent activity to me. Was I really wrong to state that "the "Ring Of Fire" is starting to fire up around the planet?" 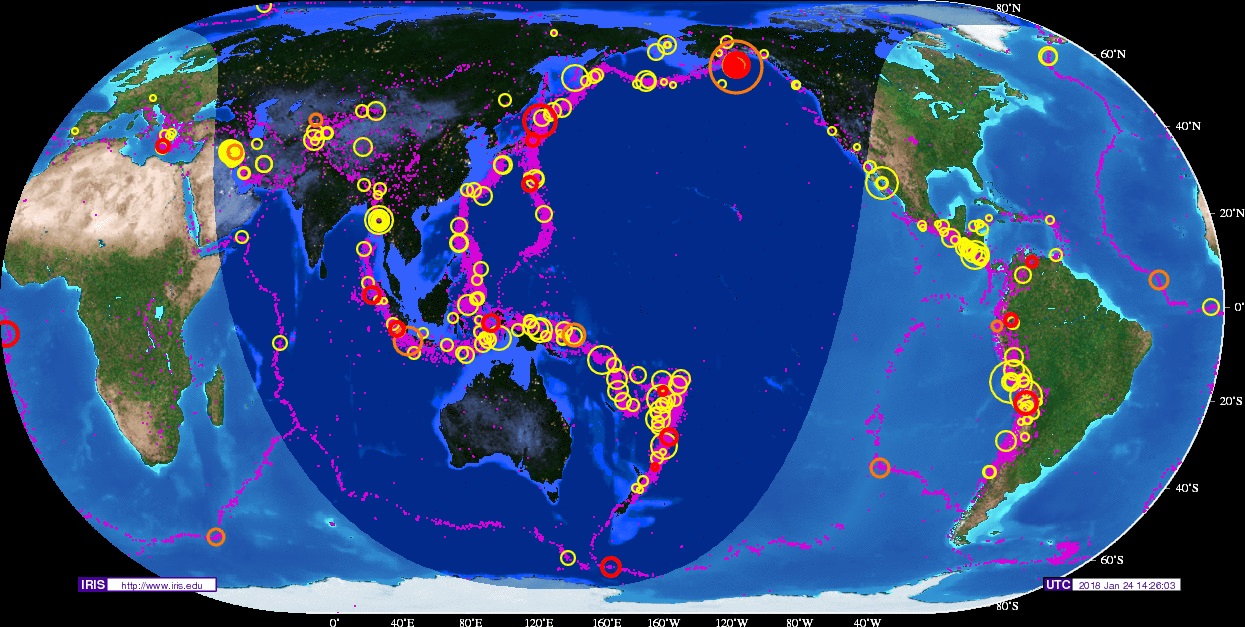 Could this recent activity cause the percentages shown on the following graph to go up? 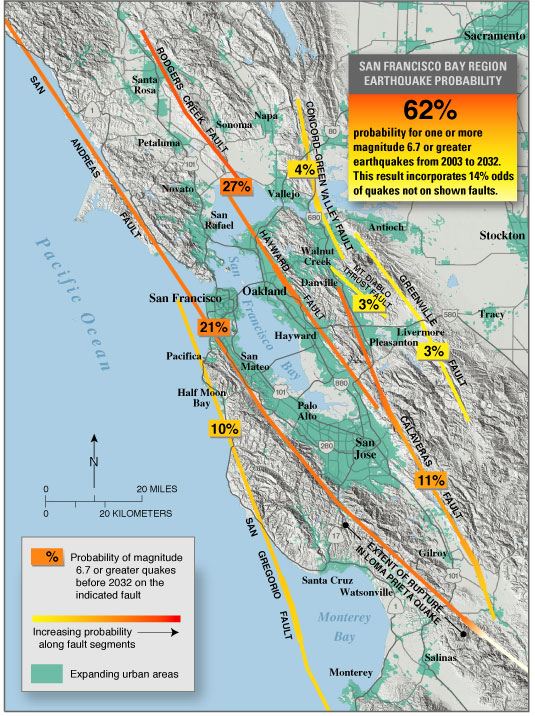 Please point where I'm ~skewing~ facts, 'cause I must have missed it.

Also, where I said that earthquakes never happened before and are only happening now.

You should read the thread that MindBodySpiritComplex linked if you wish to discuss it. Which I don't, btw.

Guess it's a good read anyway.

And the thing about the fires coming from the surface it's because of people freezing to death in other places while Cali seems to be on fire like Alicia Keys. Not saying this is it, just that is what I heard.

Yeah, I know. I was getting sick of all the political BS being posted. Thought this was an interesting story. Oh well, ya can't please everyone around here.

A swarm of 454 quakes in that area since
January 3rd!!! It only shows for the last three weeks.
Couldn't find where it has been mentioned.
I couldn't get the link to copy.
Go to USGS, then to the 3.6 & click on view nearby seismicity. It gives the whole list!

ETA: I just went on the first quake on that list & went back another three weeks & there are 674 more & 793 before that!!! I got a warning on my phone that the list was too big, so I didn't go back any farther. Definitely an uptick.
edit on 24-1-2018 by wasobservingquietly because: (no reason given)

Scientists who know more than you or me, are saying that a large quake hitting California is long overdue.


'They' been saying that for decades, to get more funding. I know, I've lived in the granola state for 60 years. We are one of those hotspots. I have heard them shout out forever theres gonna be a bigun, here, LA, up north, etc etc.

We've had one good one in 89. The Fremont fault just had a 4 pointer, thats a good thing.

As long as the ground is moving a little bit, little bit, thats a good thing. The 'overdue' bs falls on deaf ears here. Yes one day there will be another bigun, somewhere...

Hold your breath. Or better yet, heres a shovel, go drain Trump's swamp.

posted on Jan, 24 2018 @ 01:12 PM
link
Everyone knows dragons cause earthquakes. Think how much fun they'll have with LA and the Bay Area.

A 4.2 isn't much I know, but it is high given the closest tectonic plate location, and I guess it's considered being on the fringe of the Ring of Fire.

Today there was a 6.2 earthquake in the "KOMANDORSKIYE OSTROVA REGION" So we could have another quake in Alaska soon.

A pick up in the activity?
"Earth's Rotation Is Mysteriously Slowing Down: Experts Predict Uptick In 2018 Earthquakes"


Scientists have found strong evidence that 2018 will see a big uptick in the number of large earthquakes globally. Earth's rotation, as with many things, is cyclical, slowing down by a few milliseconds per day then speeding up again.

You and I will never notice this very slight variation in the rotational speed of Earth. However, we will certainly notice the result, an increase in the number of severe earthquakes.

Source
This is supposed to be the fifth year or it.
Earlier article source shared here about "Currently, the data only notes a striking correlation, but no causation. "
www.abovetopsecret.com...