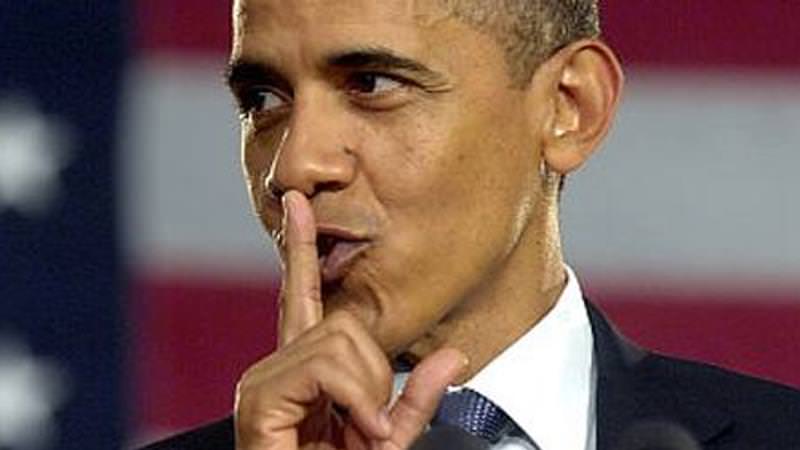 A Report was released in April of 2017 that received no publicity until recently.

The report was a ruling on the results of an investigation or audit into FISA searches made by Obama’s FBI and DOJ during Obama’s time in office.

The report shows Obama’s FBI and DOJ participated in widespread criminal searches and criminal sharing of data with non authorized entities outside of government.

The FISA Court Ruling shows widespread abuse of the FISA mandate. According to the report, Obama’s FBI and DOJ performed searches on Americans that were against their 4th Amendment rights. This went on for years. One paragraph in the report states that 85% of the Section 704 and 705(b) FISA searches made during this time were non-compliant with applicable laws and therefore criminal 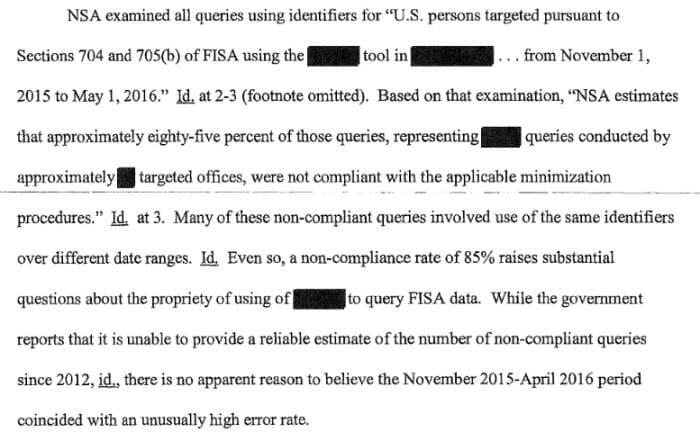 Obama's administration had the best criminals.

The ultimate punishment is to destroy them so thoroughly, so completely that their names become synonymous with corruption throughout all time to the death of the universe such that the last words of humanity are "and to think Hillary Clinton would still have another few trillion years on her sentence if she lived until now".

In addition, the report cites that at the same time that Obama’s DOJ and FBI were illegally searching Americans against their rights and unbeknownst to them, Obama’s FBI was providing this information to outside contractors who had no business or legal cause or claim the information.

rickymouse
+18 more
posted on Jan, 22 2018 @ 11:57 PM
link
Kind of depressing that Obama did that kind of stuff. Since he left office I have been informed of a lot of things he did that were not really right, most in the last year of his second term. To think I voted for him and backed some of the stuff he did...boy, I guess I wasn't too smart at the time. I paid a lot more attention to the ignorance of the law by Hillary, I wish the Dems would have kicked her out and let Bernie run.

originally posted by: rickymouse
Kind of depressing that Obama did that kind of stuff. Since he left office I have been informed of a lot of things he did that were not really right, most in the last year of his second term. To think I voted for him and backed some of the stuff he did...boy, I guess I wasn't too smart at the time. I paid a lot more attention to the ignorance of the law by Hillary, I wish the Dems would have kicked her out and let Bernie run.

Sadly, if you look at it, the Dems KNEW what was going on, that is why they INSISTED on Hillary running. They KNEW she would continue to cover up all the misdeeds of their crew and continue to use and allow them.

The whole government is complicit in this, too.

That is why they're all foaming and frothing at the mouth to get the current President out any way possible.

Once it hits the fan, the chopping block will see a lot of action, and they're terrified.

Gothmog
+17 more
posted on Jan, 23 2018 @ 12:53 AM
link
a reply to: EvidenceNibbler
Obama WAS the Criminal-in-Chief . He became a Constitutional scholar to better serve his cause of destroying it and this country

This is just a cut away, and the entire document would need to be seen and looked at. That way we can see where it originated from and who it was meant for.

posted on Jan, 23 2018 @ 01:06 AM
link
So much corruption. Obama was nothing but a pawn. Look at his "proposed" library. What an absolute joke. Hopefully, once his obvious corruption is exposed, that library will be scratched. Turn that library into a prison for him and his handlers.
Yeah right, never gonna happen-his overseers have promised him a mansion in Hawaii and everything his black (as in evil) heart desires.
edit on 23-1-2018 by Justso because: (no reason given)

Why do you think it would have been different if bernie won? Per wikileaks, clinton had the dirt on bernie too.

I cannot see Bernie even speaking badly against Obama, much less hold him accountable.

originally posted by: xenon129
I'm not sure why people trusted Obama from the start. A Chicago Democrat who's middle name is Hussein, what could possibly go wrong?

BINGO! Thank-you. I'm tired of posting essentially what you said in every thread where someone is "surprised" by how treacherous Obama was/is.

You can't rise up the ranks in Chicago and Illinois politics by being "good and kind".


Re: www.thegatewaypundit.com... utsiders/
The article you linked to will generate two camps when the House Intelligence Committee's Bombshell Memo Document is released to the public...

1. Republicans - Obama's Admin abused FISA 85% of the time. They have a history of lawlessness. Lock Them All Up!

2. Democrats - As pointed out by the GateWayPundit, Obama's Administration did what they had to do in order to keep America safe. The H.I.C. Memo further makes that point!

The "other shoes" just continue to drop, as it becomes clearer and clearer that Obama was a globalist authoritarian...who attempted to rule by Executive Order, and by weaponizing the US Intelligence and Justice apparatus - and quite obvious that he acted with a complete sense of impunity, because he had no doubt that his successor would be Hillary Clinton (part of the criminal cartel).

When the Nunes memo is released, and now with revelations that senior FBI anf DOJ officials openly talked/texted about the "secret society" within their ranks which intended to take down the incoming President of the United States...this is all taking a very serious turn.

This is beginning to make Clinton's "extremely careless" use of a private email server look relatively insignificant, within the overall magnitude of the corruption and the contempt for the rule of law that existed under Obama. When they start to squeeze the 2nd and 3rd rank players in all of this, don't be surprised to see a few dozen people roll over on Barak, the Clintons, Comey, Lynch and a lot of other previously untouchables.

They laughed when Trump said he was going to run, thought it was a dream come true when he won the nomination (because that would surely cement Hillary's rise to the Presidency) - and then woke up to a nightmare on November 9th, when the people put an end to their carefully crafted plans.

After that, they became desperate to keep Donald J. from winning in the Electoral College, and being inaugurated...when that failed, they had to quickly try for discrediting leading to Impeachment (enter Russia, Russia, Russia...and Mueller) - and they started to get really careless.

The missing texts will be found, I am sure, and then the roof is really going to start caving in on a lot of people...and I expect it will reach all the way up to "44".
edit on 23-1-2018 by mobiusmale because: typo no need. memes will suffice.

this thread is not for you. look at the format. 7 pages of slightly worded differently replies coming up.

plus this is a bait account to bait certain groups here.

The link to the original document is provided in the article.

If this were to be investigated and true it might end political parties altogether.