Is There a Terrorist Element to Vegas Attack?


Apparently new charges are going to be pressed but Las Vegas authorities do not want to say to whom they are pressing charges in regards to the Las Vegas shooting. Despite the fact that we were told for months, including several statements made by Sheriff Lombardo with the Las Vegas Metro Police, that there was a lone shooter, Stephen Paddock. Now it seems that they are seeking charges against others and police authorities in Las Vegas didn't want to mention to whom they were going to press charges, and what those charges consist of.

According to the lawyer of victims, they all heard the new development on the hearing for the press that "there will be no indictments coming for murder or shootings. However, they are investigating other charges and crimes." This would mean that the Las Vegas shooting wasn't a lone wolf attack. Even the judge reacted, as stated by the victims' lawyer, and the judge asked something like: "Without you saying to me who, or what. Are you saying that there will be other charges forthcoming?" To this the lawyer for the police said "Yes, there are other charges being investigated". The judge pressed the police lawyer and was told that the charges will be forthcoming within 60 days. "The judge then asked for further supplemental briefings to explain to her what that contained, who it is, what it is about."

It is obvious that Las Vegas police/authorities want to keep this as quiet as possible, and to me this tells me that the new charges and evidence is going to link ISIS to this attack.

The victim's lawyer also states that the press asked for the documents, and the evidence to be released since "there is no ongoing criminal investigation".

Many of us have noticed inconsistencies and really weird events occurring before, and during this heinous attack, and now it seems that we were right in questioning the "official story". Such as how was it possible for Paddock to set up video cameras without employees noticing? And as Tucker says: How was the interior door locked inside the hotel suite? Those among other questions about what happened that night do not seem to corroborate the official story.

Remember that one of the things that Obama did was to order for official reports not to mention "radical Islam" in attacks perpetrated by Muslim radicals. The fact that this whole thing is being kept secret as much as possible from the public seems to be pointing to the fact that this event was a terrorist attack. Did Paddock at the least had help in planning, and preparing for this attack?

Scott Perry (R) Pennsylvania Congressman also points out other inconsistencies, such as even though we were told Paddock was a long gunman, we are not even getting the results of his autopsy report. He also states that "recently he was made aware of what he believes to be credible evidence, or credible information regarding potential terrorist infiltration through the southern border, regarding the attack (the Las Vegas shooting)". In June and August, before the attack, ISIS warned that they would attack Las Vegas, and after the attack they claimed responsibility 4 times.

Anyway, the entire interview is very interesting, but I guess we will have to wait and see what comes out in about 60 days or less regarding the new evidence and the charges that Las Vegas police are now seeking in connection to the shooting.

originally posted by: Chance321
a reply to: ElectricUniverse

Its not a 'story'. Those making that up are the story tellers.

The Saudi Las Vegas Connection
edit on 21-1-2018 by BotheLumberJack because: (no reason given)

posted on Jan, 21 2018 @ 08:48 PM
link
I think it was a National Security operation that was covered completely up by a lone gunman cover-up.

This is my opinion, nothing has been indicated to me that there is any truth to this. That being said...

McCarren International Airport (MIA) is right next to the Route 91 Venue. MIA hosts JANET flights into and out of MIA to very high security areas in the Nevada area and some in other adjacent states. I contend that there was a transfer of extraterrestrials at MIA that night, possibly around 7 pm, and they escaped. National Security was invoked and the rest is history. I don't believe the ETs were killed nor captured because of the accelerated "disclosure" that we have recently seen from the Government and the MSM.

In my mind, it sure would explain many of the weird things that went on during the gunman's attack, for instance, multiple shooters being seen, helicopters allegedly firing machine guns into the crowd, MIA being locked-down, possibly before the shooting started, the 2 hours before the Sheriff's dept. was allowed into Paddock's room, and other anomalies. It would definitely explain the Sheriff's weird behavior during all of his press reports.

As I reiterate, this is my opinion. No one has told me anything nor clandestinely indicated to me that this happened.
edit on 21-1-2018 by NightFlight because: swapped words around for better comprehension...

originally posted by: ElectricUniverse
a reply to: NightFlight

(Sticks head back into sand)
edit on 21-1-2018 by NightFlight because: Thinking outside of the box surrounded by governmental rules may get you killed...

(Sticks head back into sand)


It's ok, i know sometimes it happens and people can get all caught up in conspiracies without any evidence.

But anyway, perhaps some of you remember this.

Las Vegas coroner’s office on lockdown — but why?

The coroner's office was in lockdown way after we were being told that it was a "lone gunman".

But, we will see what evidence comes forward in about 60 days.

posted on Jan, 21 2018 @ 10:05 PM
link
Have believed this from the very beginning . Paddock was room temperature before the firing started .

posted on Jan, 21 2018 @ 10:42 PM
link
ISIS agents may have been hired to assassinate that Saudi Prince that was at the concert.

Very possible everything in the "Official story" is BS.

originally posted by: Gothmog
Have believed this from the very beginning . Paddock was room temperature before the firing started .

Everything we "see" is staged and photographed in advance of Oct 1st.

The police in the "Hallway"

All pictures of "Paddock" and his Brother and "Danley"

All information was planted

He uses audio forensics to analyze the recordings people made during the concert of the shooting and then subtracts the echos. He concludes that there was at least 1 other shooter at a distance of around 300-350 meters. I laid out the site from google earth and put in distances radially from the center of the site. 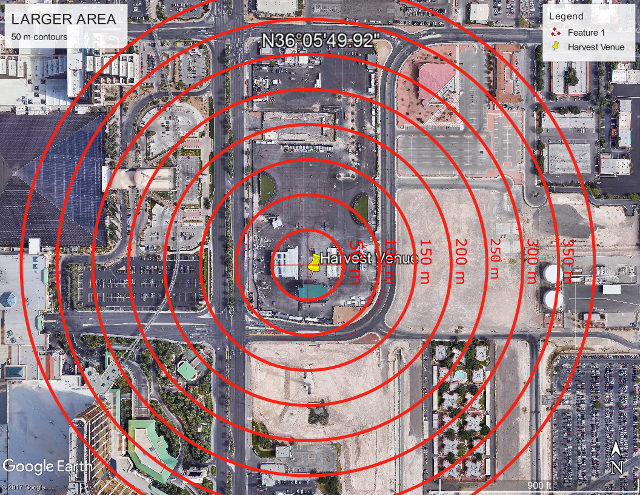 At the end of the airport runway are 2 fuel tanks, they would have ladder access and a flat roof perfect for laying out a tripod and it's about 350 meters from the venue. It's on the right hand side of the image.

posted on Jan, 21 2018 @ 11:16 PM
link
There is also the sphinx at the luxor, it's about the same distance so about 350 meters from the venue. It has driveway access on the west side where you could unload from a van, and a perfect walkway up the sphinx. There are flat spots on the sphinx's paws where you could set up a tripod.

And someone had mentioned that ISIS likes to use a triangular shooting pattern, herding people into a center area where they can concentrate fire. So, there was most likely a shooter at the Mandalay Bay (4th floor) that drove people back from the stage where the shooters at the tanks and the sphix could easily target them.

posted on Jan, 21 2018 @ 11:22 PM
link
There's also this, although Etymology online has since changed their definition;

The original wording was something like a hunter's trap, or enclosure used to slaughter game.

i do think we need to change the language to define a "terrorist attatck" i was actually thinking about making a thread on that topic... what exactly is a terrorist attack and how does it differ from just a "regular" attack. but to give you my position, yes i do think the vegas massacre was a terrorist attack even if its proven beyond a shadow of a doubt that paddock acted alone and under no influence or guidance from others.

and im sorry op i dont think i understand your orginal question... are you asking if this was an act of terror in a philosophical sense or an attack carried on by more than one person, I.E. conspiracy?

originally posted by: BotheLumberJack
America has sold itself out, Saudi's own a portion of Vegas. That ought to tell you something.

I was going to say that if there was a terrorist connection they would be trumpeting it from the roof tops, but then I read your post.

You stopped me in my tracks, so thanks for the information.