William Cooper, cospiracy theorist extraordinaire broadcast this episode of his radio show 'Hour of the Time' that he titled 'Chewed Butt Over Gannett' way back in nineteen ninety four .

In it he bi+c#es out his listeners for not buying up stock in Gannett News Service, the largest Newspaper and Media Conglomerate youve never heard of.

he call out an edition of a USA TODAY (A GANNETT COMPANY) dated dec 29 1993. he goes on to state how it is the first newspaper he has ever seen to have the same story printed on every page. Namely, the entire issue was an anti gun propaganda piece.

@ around 18:07 he really gets into his tirade, where he re-proposed that his listeners buy up all the stock in GANNETT NEWS SERVICE as to get controlling shares in that Company. When they control the shares they can control the decisions of that Company.

@26 minutes he really gets going into the connections and the Company's ubiquitous presence.

He goes on to call out GANNETT COMPANY INCORPORATED as a evil propaganda outlet, and that WE THE PEOPLE can take back our VOICE.
He said that they are currently owned by "OUR OPPOSITION".

Bill really had a way with words didnt he? 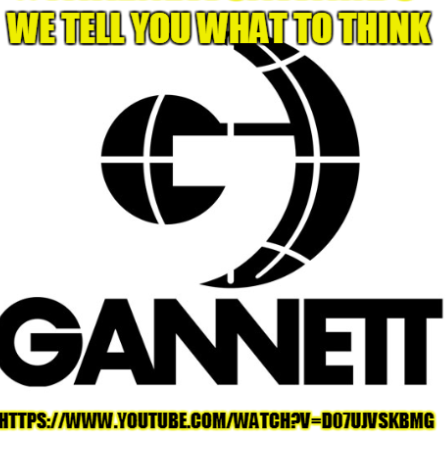 posted on Jan, 21 2018 @ 01:06 PM
link
GANNETT went on to split and the non-print media holdings were put under the TEGNA INC company's holdings.

They made many interesting acquisitions.

cars.com
CLASSIFIED VENTURES(catchy right?)
Career Builder and many others.

Major COG in the MIC

He wasn't really wrong. Gannet owns the local paper where I live, and they are definitely a big rubber stamp for the associated press which is ALWAYS propaganda prepared news, and never just the news. (Which really means they do tell readers what to think).

it would seem that they are up to a whole lot more than that.

cars.com, used cars is shady business,
and they have access to SAIC TS/SCI job postings.
networks, sources, spooky stuff too

In light of that, it appears that these huge media companies have been weaponized by the military industrial complex, and also rewarded well for playing along with the agendas. You can tell that's true by special appointments and connections to certain people like a big secretive network which seems to be what it is. It is why earth is not evolving for the better. (Only getting better for those on the big team). Accountability will eventually catch up to them.

posted on Jan, 21 2018 @ 11:10 PM
link
Wasn't sure if the OP was being sarcastic but since someone else also shared his "favorite bill cooper moment" I'd like to share some teaching he taught that stuck with me as well, not in the sense that it's my favorite moment but in the sense that it's so typical again regarding how people that are affected in their reasoning about this subject by what the bible refers to as "this system of things", and "the spirit of the world" think about the subject that starts at 5:20 (pardon the excessive nature of the video, the videomaker could have been a bit more polite in the points he was trying to make):

Is the Devil Real?