Nazareth - Hair Of The Dog (Full Album) with Guilty

Friday nights are the best.

Bio - Nazareth are a Scottish hard rock band formed in 1968, that had several hits in the United Kingdom, as well as in several other West European countries in the early 1970s, and established an international audience with their 1975 album Hair of the Dog
edit on 20-1-2018 by BotheLumberJack because: (no reason given)

I had this album, wish I still had it.

posted on Jan, 20 2018 @ 01:59 AM
link
I still have that on vinyl. Good album. I was young enough at the time that I always listened to track one with cans on. It was the first album I bought that had prominent "cuss-words", as we called them in those days.

I was playing in a band by that time, so I would play songs over and over for an absolutely embarrassing number of times learning guitar parts, and manually moving the stylus back every time. For hours. And hours. Kids today have it SO much easier.

I wasn't a huge Nazareth fan, but that album had some cool guitar parts.

I was massively into music by then, so any memory from back then automatically cues up an associated mental soundtrack. Come to think about it, pretty much ALL my memories have a soundtrack. It's amazing how hearing a specific tune can just instantly transport you to some time frame.

originally posted by: BotheLumberJack
a reply to: Gothmog


Yeah , not just local , but three States over in any general direction
Goin into town to cruise , 1500w equalizer and 6 home stereo speakers in my Chevy Van....
Big block 400 delivering over 520 hp
Windows mirrored and murals on the rest....
Those were the days.
Gone , but not forgotten
Thanks for bringing back the memories.

The thing that annoyed was the unlikely album cover for Expect No Mercy. The guy with the helmet would have had real problems executing his sword blow, on account of the horns on the helmet... The below snip may highlight the problem... 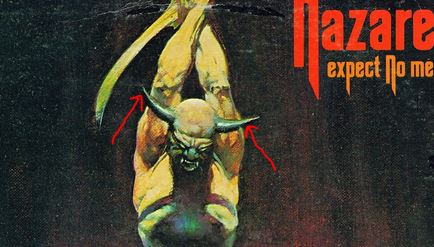 You're right, his arms wouldn't get past his horns, not without ripping flesh in the process. Maybe he's just a really stupid demon who has no experience in Sword Weilding.

Thanks for reminding me of this awesome album. I always loved the dirty guitars and vocals, and the surprising space in their music. Just really a great band and a great album.

originally posted by: greydaze
Oh hell's Yeah.."Now your messing with a son of a bitch"..Rush's first album is my fave,take yourself a friend is My fave song on that album.S&F.

posted on Feb, 22 2018 @ 06:20 PM
link
First time I heard this album was after my mother bought the vinyl (for herself). It was near its time of release, back in '75 or '76 or so. The original vinyl with Love Hurts instead of Guilty. I've always loved that album.