posted on Jan, 18 2018 @ 03:20 PM
link
I wasn't really sure where I wanted to post this. It's not my intention to draw any conclusions. I have no specific hypotheses to share. It's just a curious set of connections that I wanted to bring to the attention of ATS.

I'm going to guess that most people wouldn't know Scott S. Balber by name, even here on ATS, but are familiar with his clients and many of the incidents which have required his legal services.

In 2013, Donald J Trump sued comedian Bill Maher for $5 million dollars over a joke. Scott Balber represented Trump in the suit. At the time he was partner at Cooley LLP.

Maher also went after Trump's attorney, Scott Balber, a partner at Cooley LLP, for even taking the case.

"Do these morons even know it’s impossible for people and apes to produce offspring? And look at the lawyer’s signature," Maher said of a letter he received from Balber. "It just kind of trails off as if to say, 'I’m too embarrassed to even finish this. Scott S… Aw, [expletive] it, I’m Trump’s lawyer.'"

Maher isn't the only one to attack Balber and Trump for bringing this case to court.

Also in 2013, he represented the (Trump's) Miss Universe pageant in a suit against Ex-Miss Pennsylvania in which she was ordered to pay the pageant $5 million after claiming the contest was rigged.

“This is desperate attempt by Ms. Monnin to extend her 15 minutes of fame,” said Miss Universe lawyer Scott Balber.

Here's where things get a little more interesting (though, suing a comedian for implying your father was an orangutan is arguably interesting). In 2015, Scott Balber represented the Russian nuclear agency, Rosatom, in the aftermath of the arrest, prosecution and conviction of Vadim Mikerin.

Russia's Corruption In Nuclear Industry A US Concern And 'Threat' To National Security; FBI Still Investigates

Mikerin is currently in a Maryland prison waiting for his trial. He was arrested on Oct. 29, 2014 and was charged for asking bribes from a lobbyist, reports RT News. The 55-year-old Russian has entered a plea of not guilty. Atty. Scott Balber of Herbert Smith Freehills LLP, the lawyer representing Rosatom’s civilian nuclear division, said the company is conducting an internal investigation on the matter. He added that no evidence was uncovered that the alleged misconduct involved company officials.

That's interesting right? Given the significance placed a few months back by the right-wing media on the above events and the teased but never revealed bombshell information from the FBI's CI in the Mikerin case, relating to the would be Uranium One scandal.

Scott Balber, a lawyer representing the Agalarovs in the U.S., told the Daily News Wednesday that the timing was not in any way a reaction to swirling investigations in Washington.

“There is absolutely no connection between selling these two properties to anything in the news,” Balber said.

“I can assure you that Mr. Agalarov knows a lot more about real estate investment than you or I do,” he said.

The Agalarovs you'll recall, have a relationship with the Trumps and to the Miss Universe pageant which was held in Moscow in 2013 with funding from Aras Agalarov. It's also been reported that at the time, Agalarov attempted to setup a meeting between Trump and Putin. After that venture, a deal was struck to build a Trump Tower in Moscow in partnership with Agalarov. Funding was arranged through Sherbank, which also sponsored the 2013 Miss Universe pageant in Moscow. The funding was part of $1.6 billion dollars loaned by Sherbank to Agalarov's Crocus Group.

The deal fell through. The reasons for this aren't clear but perhaps it had something to do with Sherbank ending up on the sanctions list following the Russian annexation of Crimea.

Note, this Trump Tower Moscow deal appears to be separate from the one he pursued during the campaign. You know, that one that he signed a letter of intent for in a deal in which his shady Russian connection, Felix Sater, acted as middle-man? The one for which Michael Cohen emailed Putin's spokesman for help with?

For the last interesting connection, we'll turn finally to yet another Trump Tower and the infamous meeting setup by the Aras Agalarov's son, through his publicist.

In mid-July, the identity of an eighth attendee of the meeting was revealed. That man was Irakly "Ike" Kaveladze, senior VP at Aras's Crocus Group. His attorney? You guessed it. Scott Balber.

Washington (CNN)The eighth person who attended the June 2016 meeting with Donald Trump Jr. at Trump Tower is a senior vice president at the company founded by the Russian oligarch who initiated the meeting, CNN has learned.

Ike Kaveladze's identity was confirmed by his attorney, Scott Balber.

Kaveladze is a senior vice president at Crocus Group, the real estate development company run by Azerbaijani-Russian oligarch Aras Agalarov, according to Kaveladze's LinkedIn. His personal website says he "holds responsibility for multiple elements of the company's Russian development project."

Again, I'm not suggesting any impropriety by Mr. Balber or any of his clients in any of these incidents. Just pointing out a lot of interesting connections. If anyone has anything additional to share, please do.

Here's a quick diagram I threw together after posting: 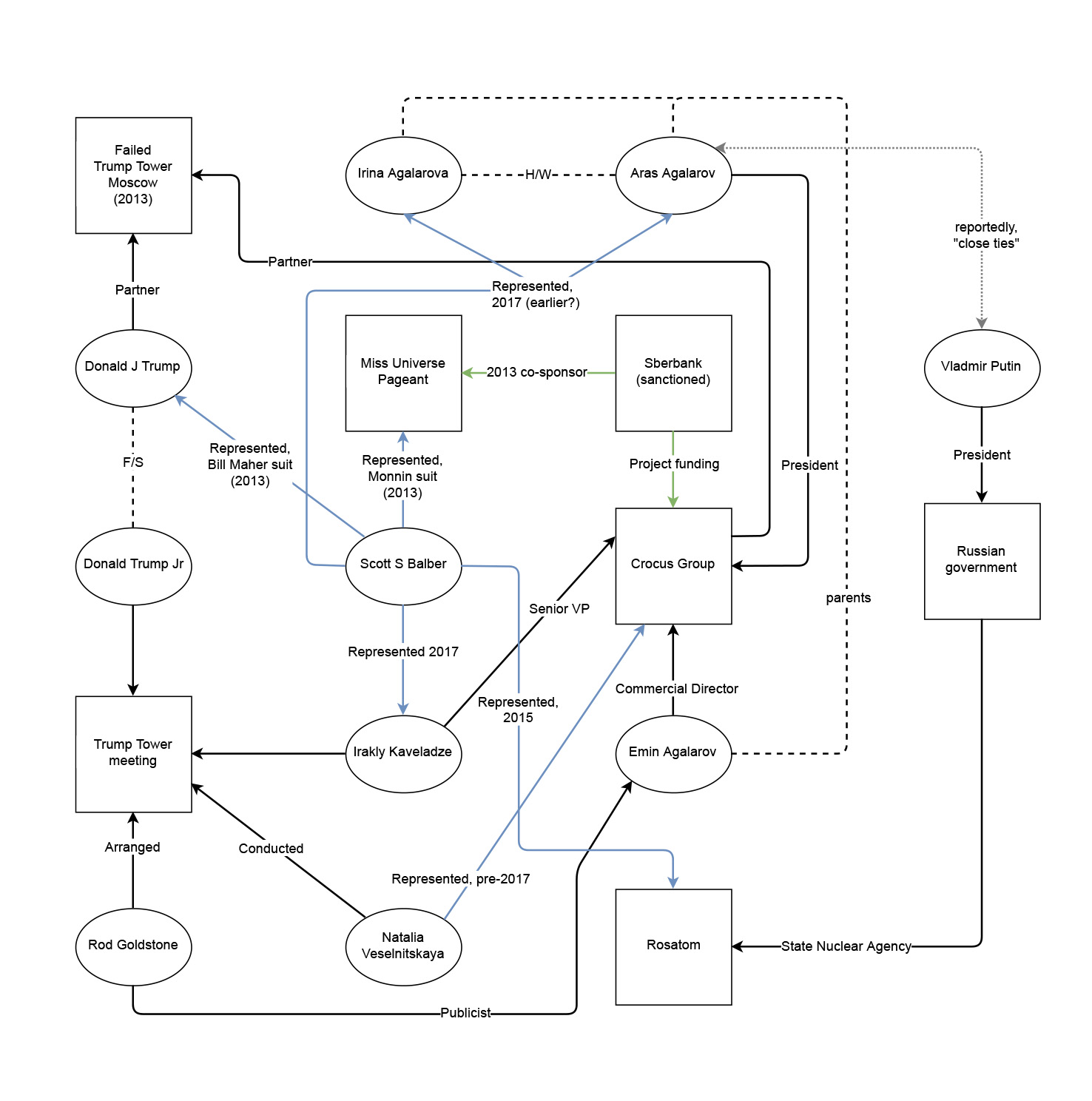 I'm not suggesting an impropriety by Mr. Balber or any of his clients

Is any of this illegal? In the same time frame as the deal during the campaign, Hillary was still conducting foundation business. Is that not improper?

Well since you brought up Rosatom.

Hmm that sorta reminds me of the BLM-Bundy standoff so Harry Reid could sell the land to the Chinese.

If anyone has anything additional to share, please do.

That op was riddled with Apophenia..

Your Mercer-funded propaganda is false on the first line. "Clinton's transfer..." You're clearly not prepared to discuss to discuss the specifics, hence he bogus infographic.

That's also wrong. Giustra sold his interest in the UrAsia Energy during the merger with Uranium One in... wait for it... 2007.

This is what you get for posting crap you find on the Internet.

Here's a term for you.


This is what you get for posting crap you find on the Internet.

Do you deny that this is false? Because I'll be more than happy to provide links.

Not only had Giustra sold his interests in UrAsia Energy in 2007, Uranium One acquired UrAsia Energy so no matter how you slice it, dice it, spin it, squint at it, keep blindly repeating it without bothering to fact check it, it's undeniably, irrefutably and wholly demonstrably false.

That is what the State Department does.


ENR promotes U.S. interests globally on critical issues such as: ensuring economic and energy security for the U.S. and our allies and partners;removing barriers to energy development and trade; and promoting U.S. best practices regarding transparency and good governance. In addition, we review applications for the construction, connection, operation, or maintenance of facilities for the exportation or importation of petroleum, petroleum products, coal, and other fuels (except for natural gas) at the borders of the United States.

No, it's not "what the State Department does."

The deal had to be cleared by the Canadian government (Uranium One was a Canadian company), the Kazakh government and CFIUS. The State Department is one vote in CFIUS and could not unilaterally approve anything. Derp?

Add to that Clinton delegated that vote and didn't attend any related meetings.


originally posted by: neo96
a reply to: theantediluvian

The "shell company" that is being referred to is UrAsia Energy. Again, that's what you get for relying on propaganda disinfographics. Let me know when you're tired of being wrong.


TORONTO, ON, VANCOUVER, BC and JOHANNESBURG, South Africa Feb. 12 /CNW/ - sxr Uranium One Inc. ("Uranium One") and UrAsia Energy Ltd. ("UrAsia") are pleased to announcethat the two companies have entered into a definitive arrangement agreement whereby Uranium One will acquire all of the outstanding common shares of UrAsia. The acquisition will result in the creation of a new, globally diversified uranium producer with an exciting growth profile and a combined fully-diluted market capitalization of approximately US$5 billion. Subject to shareholder approval, the combined company will continue under the name of Uranium One Inc.

Cause I know it's going to be ignored.


In June 2009, the Russian uranium mining company ARMZ Uranium Holding Co. (ARMZ), a part of Rosatom, acquired 16.6% of shares in Uranium One in exchange for a 50% interest in the Karatau uranium mining project, a joint venture with Kazatomprom.[9] In June 2010, Uranium One acquired 50% and 49% respective interests in southern Kazakhstan-based Akbastau and Zarechnoye uranium mines from ARMZ.

Round and round we go. Where we stop everyone knows.