In September, the U.S. Department of Agriculture gave the green light to a version of the plant Camelina sativa, an important oilseed crop that had been genetically engineered using CRISPR to produce enhanced omega-3 oil. What was interesting about this approval was that the USDA did not ask that the inventors of the plant endure the usual regulatory hoops required to sell biotech crops. The next month, a drought-tolerant soybean variety developed with CRISPR also got a quick pass from the USDA.

Would you eat this, and do you think it should be properly Regulated? I think all food should be regulated, to avoid regulation is to allow loopholes, and we all know they like loopholes. Anything to save a dime right?

Anyway, I like to remain aware when it involves stuff I put into my body. Anyone with concerns about Modified and Genetically altered Food should be cautious. It's not like 1950 anymore where everything was Organic and the world Organic was never a word used for food consumption, because it simply wasn't a concern.
edit on 18-1-2018 by BotheLumberJack because: (no reason given)

In April 2016, the USDA gave the first free pass to a CRISPR crop, clearing white-button mushroom that had been edited to not brown as quickly. In its letter to the scientist who developed the engineered mushroom crop, the USDA wrote that because the new mushroom “does not contain any introduced genetic material” it wasn’t even subject to the agency’s GMO regulations.

Everything comes down to chemistry. Everything is chemistry. A lack of chemistry is outer space / a vacuum. And there's a major irony in Chemistry where "Organic Chemistry" is a field of science and "organic" (as in vegetable) is more like a virtue of the touchy feelie variety (not that it isnt to be striven for where sensible).

"CRISPR" sounds like fun. Cant wait for the scaremonger memes LOL
edit on 18-1-2018 by IgnoranceIsntBlisss because: (no reason given)

I'm waiting for more information before the memes appear. Evaluation is everything.

posted on Jan, 18 2018 @ 06:16 AM
link
For myself, I would never knowingly or willfully eat anything that is biogenetically designed like this.

I get it, I know that most of our foods are already genetically modified to some degree. My wife and I eat mostly from a farmers market when in season.

But this would be a line I would never feel comfortable crossing.

The last thing I would adhere to eating would be more genetically altered crap.

I prefer the Farmers Market as well, good natural food source as apposed to cyberwrapped garbage. Not putting down those who can't but really it's a matter of research. I know what crap tastes like, that's why i dumped it and found something better.

CRISPR will crystallize and shatter your innards muahahahaha!

originally posted by: bigfatfurrytexan
CRISPR could be the salvation of many of humanities ill.

Nightshades are deadly, I agree. There's is enough substantial evidence of that, however undermined by Corporations with an agenda. Tomatoes for example are a night shade variety. People used to consider it poison, and tomatoes were not looked upon as edible back in the day.

You want to have as many kids as you want? Weather ruining crops, people pouring into the country? Unfortunately genetically modified food alleviates some issues around feeding folks and make agriculture more profitable.

I know. To me. These genetically modified crops = slow genocide. I mean really, the Government's done it before. Thalidimide is one example. Agent Orange grown in crops who knows, the Cambodian Gov sued the US Gov for it. But still they keep poisoning us. Things could be so much simpler if people would just wake up.

I won't be eating it because your GM food is banned for human consumption sale in the UK/EU.
How did Americans let themselves get sold out to the GM food industry. We protested, destroyed test crops, and won the GM war in Britain. Crazy how a generally unarmed populace managed to beat big industry and government.

I guess the 2nd ammendment failed to stop your government poisoning y'all. Rise up people, like we did in Europe where we still have natural food.
edit on 18-1-2018 by CornishCeltGuy because: added final paragraph

I know. To me. These genetically modified crops = slow genocide.

It's actually the opposite as we, humans, have been cross-breeding plants for thousands of years and if we hadn't we wouldn't be able to eat most fruits and veg. For example: 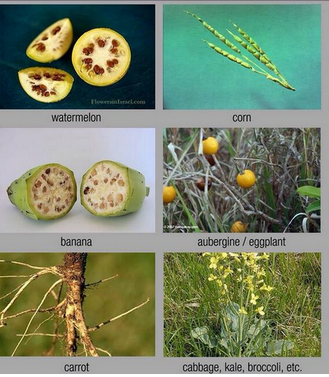 GMOs are just that, precision cross breeding, done in a lab so instead of taking years or decades to change, they are fast as they immediately select the gene they need to enhance taste, resistance, size etc.


originally posted by: CornishCeltGuy
I won't be eating it because your GM food is banned for human consumption sale in the UK/EU.
How did Americans let themselves get sold out to the GM food industry. We protested, destroyed test crops, and won the GM war in Britain. Crazy how a generally unarmed populace managed to beat big industry and government.

Yes, many EU countries have banned GMOs cultivation. However, they still import tons of GMO soy and corn mainly from the US, Brazil and Argentina (approx. 30 million tons per year). Imports of GMO food and feed- EU.

The ban happened because many European countries, like Italy, Scotland etc, still support local small scale agriculture and not because they deemed GMOs unsafe. In fact, it has been in the news that the ban is happening not for scientific or health reasons, but to protect their international quality reputation (due to many people being skeptical of GM produce).

Yep it's used as biofuel or cattle feed. It is not used as ingredients in food for human consumption.
It's imported because it's cheap and there is no risk of cross pollination simply because it isn't grown here.
Our organic farms are not contaminated as has happened in the US.

Oh and splicing animal genes with plants is not possible with the traditional methods so your comparison seems dishonest to me.
edit on 18-1-2018 by CornishCeltGuy because: added final paragraph

Onions- peppers -Garlic the original plant evolved to keep bugs from eating it but as it is what they produce is not poison to humans so makes for great hamburgers lol .

Prove its safe for humans and it tast good ill eat it .
I dont care if a fish gene is put in corn ( sure would reduce soil pollution .
ps if on the off chance we kill our self doing this well thous are the brakes .

True, most GMOs import are for feed but there are lots of GM products we buy and eat regularly: cooking oils, chocolate, cereals etc. Here is a list if you try to avoid those products.

I am not concerned because we eat met, eggs and milk from animals that have been fed with GM products. And I am yet to see scientific evidence to condemn GMOs, or that show a link between them and disease and mortality.

I disagree with regulations in general because I believe the market can better regulate products than government. Government regulations just create opportunities for corruption, like the revolving door between big corporations and government regulatory agencies, they become gatekeepers more or less.

In general large bureaucracies dumb the population down as people think the government is protecting them so they become lazy in regards to educating themselves. Free markets force people to become educated and then make decisions based on their research.

The absolute important point in the UK is we get a choice where US citizens do not.
ALL GM PRODUCTS ARE LABELLED AS SUCH IN THE UK

edit on 18-1-2018 by CornishCeltGuy because: typing mistake

this it more Dangerous than GMO !

originally posted by: CornishCeltGuy
The absolute important point in the UK is we get a choice where US citizens do not.
ALL GM PRODUCTS ARE LABELLED AS SUCH IN THE UK


LOL
Yep, true, and all thanks to EU regulations. With May and chums I don't think you can count on that continuing after Brexit.

But I agree on the labeling, people should be able to choose according to their preferences.