Raw Water, Why Is That A Thing.

posted on Jan, 17 2018 @ 06:59 AM
link
Of late I've been coming across certain commenter's view on some new craze kicking off in San Francisco, and California in general, but before I go on here is what it supposed to be.


The idea seems attractive enough: pure drinking water drawn from a sparkling stream and bottled without any extra chemicals or additives.

Hmmm so far so good until you read further down link.
The cost,the cost can be anywhere from 33$ to 60$ a freakin bottle, now after yrs of conspiracy theories on fluoride and gay frogs, some super kool folks "ahem" Libs have joined with far right Cons, but out did them by turning a buck out of it.

But remember when bottled water was a like WTH do I need bottled water for, that was for rich pretentious azzholes with their Perrier and Gray Poupon , the rest of us did fine with tap, with or with out a filter, rusty piping , boil it then cool it.
But now ,even I , spending money on bottled water so don't get too full of yourself, before you know it you maybe heading down to your corner store 60 bucks in hand.

Tap water is crap. No matter where you live. The only thing I use tap water for is cooking and my garden.(sorry garden) I used to use it in both my coffee makers but it clogs them within a month. I would collect rain water where I live now but ya not going to happen. It really doesn't rain here and when it does you really should not be out in it. Thank you nuclear testing... I thought about making a charcoal filter with my gutters but I have no idea if that gets rid of radiation.


Uh, you have never, until now heard of bottled spring water?.Its been on the market for many many years. It costs about 4 dollars for a 35 pack.


Anyway, I grew up drinking well water, but now I drink, only filtered water from the Fridge(built in water purifier) and bottled water. You rarely will see me drink regular water. I am from the Chicago area, but have lived in LA for 10 years, bottled water was big when I left the Midwest, so I don't know what your deal is.

But what did folks do before bottled water, and let's keep in mind, Raw Water is full of crap, dead animals ,the guy pissing up stream, plus there is a reasons why some early folks drank beer or wine instead, because so-called Raw Water can be foul as hell.
edit on 17-1-2018 by Spider879 because: (no reason given)

I drank bottled water because of my wife, but I've never seen the use in it unless your water came out brown due to piping or contaminated.
edit on 17-1-2018 by Spider879 because: (no reason given)

originally posted by: stosh64
a reply to: Spider879

If you think that's bad, then oyu should look at this (ETA: there's profanity):

I lived in Kenmore Square in Boston in the late 80's.... Disgusting water; smelled like fish... 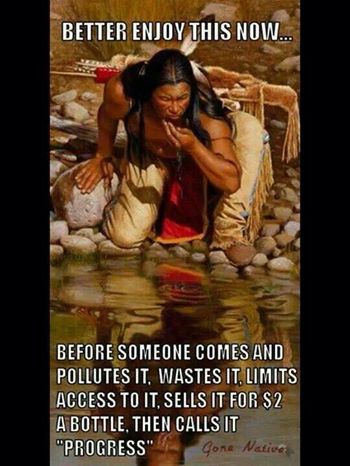 Drinking from a garden hose is known to the state of California to cause cancer.

Says so on the tag of the hose.

Our ancestors did not have the amount of pollution we have today. Factories used to just dump waste into the rivers and Oceans. They still do, when they can get away with it. So Yup, I prefer bottled or filtered water.

Ok I'm not against bottled water per say but this new "Raw Water. " kick as something super healthy, energising , the way our ancestors drank it,
Never mind the poop, and dead things, harmful bacteria, that caused our ancestors to die at the ripe old age of 20 if they happened to survived a saber tooth anything.


Drinking from a garden hose is known to the state of California to cause cancer.


So is wearing certain kinds of boots. I couldn't believe it when I saw that warning on rubber boots. It seems like everything in California gives you cancer.

What are you talking about? The "raw water" is bottled directly AT THE SPRING before it can become polluted, with all of the crap you are talking about. It comes out of the spring and goes directly into a bottle.....

Not too long ago, I watched a video about Korean youtubers trying different bottled waters hey, don't judge me. It really drove home the point about the ridiculous variety of bottled waters. There were different price points so you could try "budget" waters or "luxurious" waters, though none in the video were as ridiculously expensive as the $100,000 bottle.

The whole principle would be the saying "It must be something in the water". Well, what better way to find out? I'd make a killing! Muahahaha!


People are over 60% H2O so to us Masons you are all just gaint bottles of water. Stay healthy!