Imagine You Went Into Coma In Mid-2016

Would this be your reaction to the political state of America ?

I think it's pretty funny actually, that one girl is really smart, she understands the political reality but she doesn't like it.

I laugh and do find the reactions hilarious because they were all dumb founded yet had nothing good to say. I agree with you the African american girl actually has abit of intelligence which it seemed the others didn't like.

And when I saw the board here on fire with YOU'RE A RACIST threads about 20 a day, and "Trump people rioting their own rallies" in the MSM all day long (which was the inverse of what was really happening), and "kindergartners should be encouraged to use the opposite restroom at school" (with no oversight to keep perverts from abusing the situation), and all the rest of that noise...

...the moment when I finally frameworked together it how society went so far out of its mind, when I figured out the full picture of this new "SJW" term, was literally like watching the Twin Towers collapse live on TV all over again. It did take me a couple weeks of 'WTF is all this' head scratching before it hit me.

And then to speak out against how clearly wrong this all was for society, for the first time in my efforts here, all the sudden I was a "racist" too. 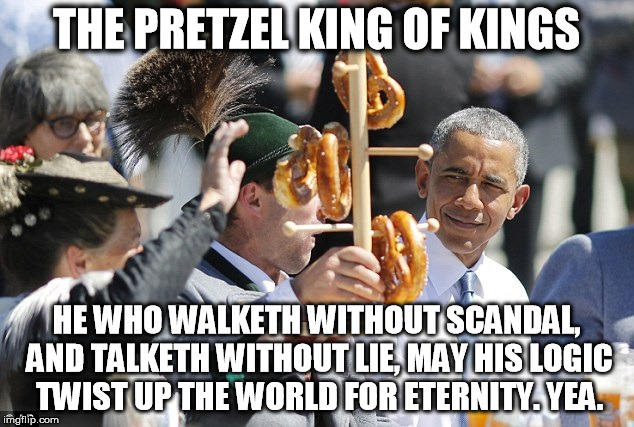 edit on 9-1-2018 by IgnoranceIsntBlisss because: (no reason given)

Then I wouldn't have to listen to this Russia bull snip.

maybe it's time to disconnect for a bit..

I did and in my absence the progressive social engineers lit society ablaze with this "Social Group Warfare"; the ultimate epidemic of a self-perpetuating diversion to keep We The Little People from gaining focus on / uniting against our elite masters behind the whole scheme.
edit on 9-1-2018 by IgnoranceIsntBlisss because: (no reason given)

posted on Jan, 10 2018 @ 12:34 AM
link
a reply to: Blue_Jay33
Ha! Sometimes I forget who is president and still think Obama or billy bob Bush is Potus. They to were not liked by a great many people, while others did seem to like them. But considering what we had to work with, as good as any. And then people look at me funny and, Oh ya, Trump. As good as any I suppose, and go on with my day. Arguing about politics while, it may be important in some spectrum's, does get overrated, and also overindulged.

However those kids in that house in that game show, they also look overindulged to me. But then again so does Trump or these trump people, so who knows. Maybe I am getting old, or maybe I have been old, this whole tirade seems overindulged to me.

Am I the only one asking does politics and this whole system even serve a purpose anymore? But thinking on it. Yes, yes it does. So I suppose the system does work.

originally posted by: galadofwarthethird
Am I the only one asking does politics and this whole system even serve a purpose anymore? But thinking on it. Yes, yes it does. So I suppose the system does work.

Social Control is what its all built for. And it keeps working like a charm as They keep stepping up the game against US.

Its more like you all keep steeping up the game against yourself's. Which may not be such a bad thing. 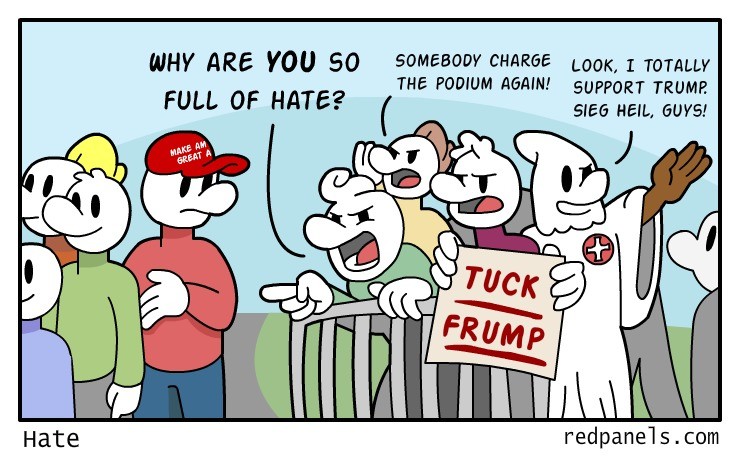 You mean American's? (I call us United Statesian's)

Or the human beings of Planet Earth?

We're not all trying to control society and use our military to dominate the Planet, although many folks in society sure do like to try and play at be involved in those games.

Yeah the way I actually looking glassed it was I was only scanning the headlines for a few moments each morning March-May, via Google News. All thos eyears I had managed to avoid getting a smart phone, but circumstances forced me to so on the can in the morning I started looking real quick. I had intended to avoid the election altogether after Rand Paul was knocked out. I thought Trump was there as a NWO hatchetman for that purpose so figured another complete waste of time.

Now pre-SJW America I could just scan headlines and know the Big Story behind them most of the time. But since I was completely tuned out of left/right politics + social media I just had no concept of SJW as they stepped in just after I stepped out.

So now I'm reading these Trump supporters rioting themselves headlines each morning and just didnt make any sense. Finally at the end of May I logged into the site to do a rant about something completely unrelated and I was called an SJW. LOL!

So then I of course had to figure out what that meant. And then I figured out it was SJW's rioting the rallies. And then I just had to know why the MSM was saying it was Trump's people the whole time. And figuring out the rest of the confusion over what had been going on, oddities like Obama wouldn't say the term "radical Islam" was just bizarre to me, and trigger warning stickers, and this Nu-English thing where they're redefining half the English language ala PC, and 72 genders, and "only whites can be racist", and on and on...

It took me about 2 weeks observing the 'new' debate format of the age, here in the site mainly, while also figuring out the base of how it was socially engineered as at the rate of spread across society there was absolutely no way this snip came accident nor just arose naturally... and finally it hit me like 9/11 one night.

The only cue I had coming into it was the South Park season the Fall before I was able to pick it all up much quicklier. I mean I had heard of "Political Correctness", I had seen it on Penn & Teller BS some years before from a college administration perspective mostly how I recollected it. But there was just no hint of this stuff in regular society pre-2010 with the exception of "if you criticize Obama you're a racist" I saw Olbermann go out of his mind on one of those rants was the last left/right news broadcast I watched from 2010-2016.

What the Democrat's & progressive social engineers did to the liberals after Dubya with this stuff is one of the most tragic case studies in our entire saga of human cultural evolution.

They are always the victims, never the guilty!

If the copied that behaviour from Israel?

Rightwingers love to see themselves as the victims they are, but they don´t see that they are victims only because of their ideology and not because of their critics, poor snowflakes.
Need a blowrag to dry your tears?

That's the game the SJW brought to the table and their playbook was straight outta Nazi Germany. Although the "youre a racist" thing they got that from the Zionists (their "you're an anti-semite!") demagogue method to silence any and all critics of their polices).

Across the board censorship. That's a Trump thing? Or SJW?

These techniques are outside of ideology, they're social movement / political party techniques that can be adopted by any group / organization on any group any time in history. And it happened here in America this decade; it happened again in Europe.

This is textbook stuff, brought to the world by none other than the social sciences departments at our big shot universities. Meaning these fountainhead mofo's knew exactly what they were doing as they crafted and deployed this new social order design.

THAT is why I got on board with stopping Hillary which inherently meant helping Trump. To add 8 years of Hillary on top of 8 years of Obama running the game would have been a true dystopian state of affairs. 8 years of "if you criticize Hillary policies YOU'RE A SEXIST".

And get real: the whole SJW mindset is built upon victimhood. Half of the diehards claim to be PTSD even the rich little white kids involved. As if they're ever known trauma. They're obsessed with stuff that happened 150 years ago.

So now they've got this racial etc hyper-sensitivity complex, mostly victimhood, the whites though with a heaping of guilt based upont eh victimhood of the rest, so they turn around and start PERSECUTING the straight white males across society, so the SWM turn around and say F that, and then you turn around and call the 'whitelash' out as "Trump supporters all play the victim"?

Cause & Effect buddy. Straight white males persecuting everyone else was NOT a thing pre-SJW, where SJW persecuting SWM en masse post-SJW was all the sudden. So if SWM turns around defensively after years of persecution for merely being male that's not "playing the victim".

Meanwhile essentially everyone besides SJW that actually notice naturally react to the anti-white (racist) anti-male (sexxist) anti-straight SJW agenda when the finally notice it. Because all across its sufrace its bigoted against anyone & everyone that's doesn't agree with it. Like Nazi's.

Because its a Supremacist Ideology.

Yes, that's right, Supremacism isn't only a white thing or a Nazi thing, its a social group identity format / posture which ANY social group can adopt / become / be molded into whether it be White Supremacy, Black Supremacy, Male Supremacy, Gay Supremacy, Republican Supremacy, or Strawberry Shortcake Supremacy.

originally posted by: Metallicus
That was absolutely hilarious.


You mean they weren't? lol


This clip is very telling. She hit it on the head. "Younger generation" is and always has been clueless about the real world. They see things from a different pair of eyes. They're either really jaded or really naive. They haven't had a chance to understand life and the world around them yet. There perspective is mostly "self" and what they 'think' the world is around them but really have no clue what so ever.


My reaction would have been..... "It's about damn time someone did something half assed right. Maybe there is hope after all".

and of course I would have been the black sheep in that room... fist fights daily. lots of tears and sadness. People would have been begging to get out of that place from day one.

This clip is very telling. She hit it on the head. "Younger generation" is and always has been clueless about the real world. They see things from a different pair of eyes. They're either really jaded or really naive. They haven't had a chance to understand life and the world around them yet. There perspective is mostly "self" and what they 'think' the world is around them but really have no clue what so ever.

Sounds like they had better get dow to the polling booth we need their voice!

Wasnt Soros trying to get the vote age lowered to 17?