posted on Jan, 9 2018 @ 02:36 PM
link
New analysis of the stone that was discovered in south-west Egypt in 2013 has served only to deepen the mystery regarding its origin , the composition of the stone's mineral content is unlike anything researchers have yet come across.

"If it were possible to grind up the entire planet Earth to dust in a huge mortar and pestle, we would get dust with on average a similar chemical composition as chondritic meteorites," says Kramers. "In chondritic meteorites, we expect to see a small amount of carbon[C] and a good amount of silicon (Si). But Hypatia's matrix has a massive amount of carbon and an unusually small amount of silicon.
"Even more unusual, the matrix contains a high amount of very specific carbon compounds, called polyaromatic hydrocarbons, or PAH, a major component of interstellar dust, which existed even before our solar system was formed. Interstellar dust is also found in comets and meteorites that have not been heated up for a prolonged period in their history," adds Kramers.

In another twist, most (but not all) of the PAH in the Hypatia matrix has been transformed into diamonds smaller than one micrometer, which are thought to have been formed in the shock of impact with the Earth's atmosphere or surface. These diamonds made Hypatia resistant to weathering so that it is preserved for analysis from the time it arrived on Earth.

The strangeness doesn't end there , they also discovered metallic aluminum.


"The aluminum occurs in pure metallic form, on its own, not in a chemical compound with other elements. As a comparison, gold occurs in nuggets, but aluminum never does. This occurrence is extremely rare on Earth and the rest of our solar system, as far as is known in science,"

"We also found silver iodine phosphide and moissanite (silicon carbide) grains, again in highly unexpected forms. The grains are the first documented to be found in situ (as is) without having to first dissolve the surrounding rock with acid," adds Belyanin. "There are also grains of a compound consisting of mainly nickel and phosphorus, with very little iron; a mineral composition never observed before on Earth or in meteorites,"

Researchers believe the composition of the stone suggests it existed before our Solar System formed and could overturn the theory that our solar nebula had an even distribution of the same kind of dust and material from elsewhere was included.


"What we do know is that Hypatia was formed in a cold environment, probably at temperatures below that of liquid nitrogen on Earth (-196 Celsius). In our solar system it would have been way further out than the asteroid belt between Mars and Jupiter, where most meteorites come from. Comets come mainly from the Kuiper Belt, beyond the orbit of Neptune and about 40 times as far away from the sun as we are. Some come from the Oort Cloud, even further out. We know very little about the chemical compositions of space objects out there. So our next question will dig further into where Hypatia came from," says Kramers.
phys.org...


Or it could have been Alien jewelry ... you decide.

This thing sounds incredible! I would love to be on the team of scientists/researchers trying to put the pieces together and find out where the heck (or how the heck) this thing came to be.

Thank you for sharing G 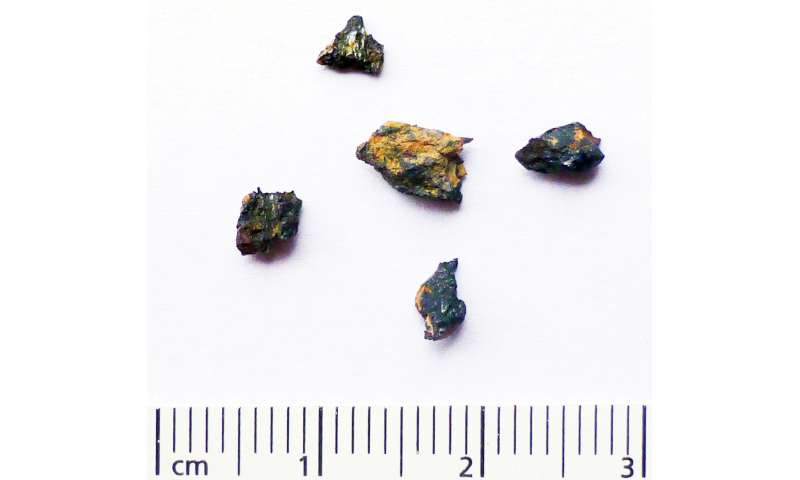 Researchers Jan Kramers and Georgy Belyanin found mineral compounds unlike anything on Earth, or in known meteorites or comets, in these fragments from the Hypatia stone, which was picked up in south-west Egypt in the Libyan Desert Glass Field. Credit: Dr Mario di Martino, INAF Osservatorio Astrofysico di Torino Read more at: phys.org... Stories like this are exactly why I come to ATS. Going to be watching this story with great interest!
edit on 192018 by M4nWithNoN4me because: Punctuation