I find it peculiar that MSM and Feds chose to escalate issue with Brown only now in 2018 when sanctuary was declared by Brown since early Oct 2017. Seems like it's a 'double feature' of a rouge state going against the federal grain of not just one but 2 issues, legalizing not just statewide migrant amnesty but also statewide recreational cannabis.

How bad will the punishment get, and will it be just upon CA governor/government, or will the people of CA also be hunted down by feds anyway for migrant status or recreational pot?

To call it flirting with civil war seems a misnomer cuz it sounds more like a Californian independence movement where the states new movements and acts are starting to conflict with federal/deepstate ones thus the state begins declaring its solidarity and independence much the 13 colonies declared to Britain.

Cali would end up without any water.

It si that simple.

What a shame so much perpetual depopulation of natives just to take over everything.

Mexico wanted Texas in exchange for paying for the wall. 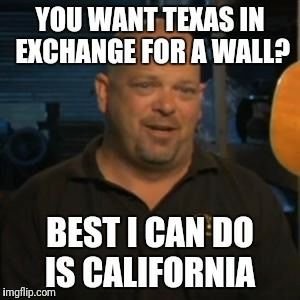 Wow a genius must be a libtard,California is one of leading economy,we are at war here with your type,losers from other states come here to get welfare,so we are at war with your type,we are changing ways things go here,but the uneducated always throw in their 2 cents