page: 1
24
<<   2 >>
log in
join
share:
JBurns
+3 more
posted on Jan, 7 2018 @ 10:27 AM
link
A federal prosecutor hailing from the "great" state of California has contributed to a "concern trolling" article in which he lambasts the [what he falsely calls a] "loophole" which allows things like ghost guns and homemade firearms.

“There is a loophole under federal law that allows an individual to make a firearm,” said Justin Lee, a federal prosecutor in Sacramento who has handled several ghost gun cases. “That loophole only extends to that person. The person breaks the law as soon as they are transferring that firearm.”

This guy is going to wish he'd have done more research before opening his trap-flap.

2) It is NOT illegal to transfer a "ghost gun" or a gun you made in your home. You may sell the unregistered/unserialized weapon, provided that selling it was NOT your intent when you made the firearm. There isn't a limit on how many you can sell either, as long as you decided to sell them AFTER building them and weren't engaging in unlicensed firearm sales (as a business on a regular basis, private sales are perfectly legal).

This is another example of runaway liberalism targeting our culture. As soon as the "oh-so-intelligent" ATF agent used the term "gun culture" I knew he was a hack.

However, a sane and intelligent voice (the owner of the 80% lower "ghost gun" sales site) entered the discussion following the gaffes by ATF/fed prosecutor's hysteria and lies.

Companies that sell the unfinished receivers and gun-rights advocates including the Firearms Policy Coalition say law-enforcement concerns are overblown. People who make these guns are generally hobbyists who “want to build things with their own hands,” said Tilden Smith, president of 80% Arms, which manufactures unfinished receivers and sells them online.

“There are much easier ways [to get guns] that’ll appeal to criminals,” said Mr. Smith.

Gun-owners distrustful of registering their firearms with the government also are customers. “Unserialized, Unregistered” is the slogan for GhostGuns.com, which sells handgun kits, unfinished receivers, and other items. Kyle Martin, president of Ghost America LLC, which runs the site, said customers “want to enjoy their complete freedom as American citizens.”

Damn right. It is all about enjoying our *complete* freedom as American Citizens. We aren't willing to infringe on the second amendment to save any number of hypothetical lives. This position won't change until liberals start worrying about the real top causes of death in this country. Until then, it is a plot to disarm American patriots by the overreaching state of Komiefornia.

That's OK Cali. You and your friends in NY will be losing your federal money (unless you bow out on sanctuary cities). Liberalism will once again prove itself as a failed ideology. Ever wonder why the federal government takes 33% of your paycheck, while still having an extremely high state tax rate? That's liberalism.

And yes, before any liberals start twitching in the eye or chewing their fingernails, I am a gun humping ammosexual. Proud too. My gun culture is stronger than your anti-gun culture. Either way, I find it funny that your entire existence is based on disliking the fact that conservatives (and gun owners) choose to exercise our Constitutional rights. We are passionate about our rights. You are passionate about us, apparently. Obsessive even? Get your own hobbies, and stop worrying about ours. Statistically, you'll be killed by one of those gang-banging thugs you always stick up for long before a legal firearm.

Cheer up, losing all the time isn't so bad. At least you can take an honest look at your politics, and realize (maybe, finally?) that any candidate running on gun control has lost the election (up to and including Hillary'16).
edit on 1/7/2018 by JBurns because: (no reason given)

We'd know it'd be something stupid.

To avoid background checks, Mr. Galvez bought rifle parts, then assembled the five guns at the Los Angeles machine shop where he worked. He offered to build his buyer 100 more for $130,000.


Actual buyer must pickup from FFL dealer who will conduct the background check. Learn more


MisterSpock (great name, by the way), that sounds like the sort of dubious facts CA liberals make and stake their careers on! I love seeing federal agents/prosecutors who are blatantly biased yet so ignorant of the actual law. Wonder if either will lose their job? Of course not. Just another day in the life of an anti-gun liar I suppose

posted on Jan, 7 2018 @ 10:43 AM
link
This reminds me of when Die Hard 2 came out, the hysteria about Glock pistols being part plastic. When it comes down to these types of things, it has nothing to do with facts and logic anymore, but pure hatred of an inanimate object.


Thanks for the link! Love CTD, they make great products. I've ordered a few dozen cases of ammo from them too. I also like ammogarand, since you can still purchase bulk .30 caliber AP/API projectiles for loading into any .30 caliber platform (.308, .30-06, .300 Win, etc). I had located a bunch of SS190 projectiles (for the 5.7, technically) that I loaded into 5.56 cartridges for my rifle. Perfectly legal too

Well heck, I wasn't going to do this, but since the liberals want to make such a fuss over ghost guns, I'll have to order myself another 80% lower and build a second unserialized/unregistered/untraceable ~assault~ (thunder, clap, lightning, sparks, mushroom cloud) ghost-gun-rifle-machinegun-pistol-bazooka-thing.

Shoot, while I'm at it, might as well grab some more HI-CAP ASSAULT CLIPAZINES from there. Or maybe a "barrel shroud" - you know that thing which, according to a """brilliant""" CA lawmaker, "comes up and out of your shoulder"

It pisses me off when they lie like that.

No one can build one of those rifles without the lower,

And they are heavily regulated.

posted on Jan, 7 2018 @ 10:51 AM
link
Quick, watch out! DiFi is coming to town, and she has an important PSA for all of us lowly gun owners. She will 'splain exactly what is so dangerous about these "horrible" creations. (insert roll eyes, tongue out, laughing) 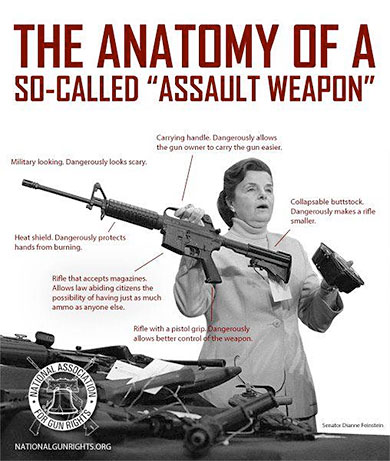 
The anatomy of a so-called "assault" weapon

4) Detachable magazines: [God forbid] "Dangerously" allows law abiding Citizens the possibility of having just as much ammo as anyone else

7) Idiot Dem politician with expectedly low IQ: The most dangerous animal there is.

The sad thing is they are not lying. They are just that ignorant of the subject that they just regurgitate scary garbage they hear from some other ignorant boob. They all actually believe these things, no doubt due to a hugely exaggerated, and completely unfounded, belief in their own intellect.
edit on 7-1-2018 by MisterSpock because: (no reason given)


Ah yes. Pride before fall though

Can't wait for them to fall, and not have anyone there to pick them back up. Libs are all about their "safety net" (what are we, 5?) and thanks to their attacks on our way of life, our culture and our Citizens (via Sanctuary cities)... no longer have one.

Then again, California is a state that will whine, cry and lie about guns all day long. But as soon as some illegal kills an actual Citizen, the lib-brigade will fight to clear them and ignore the firearm entirely. To them, guns are only an issue when we have them. It really is simple though. No American patriot will ever voluntarily cede their Constitutionally protected weapons. We must fight to repeal the NFA, or provide an exemption via affidavit for militia use/construction RE: NFA weapons.

posted on Jan, 7 2018 @ 10:58 AM
link
Okay so they are just going to create the potential for a large sub-economy as people print out more components then trade or buy/sell for other components to assemble.

Technology is a beast statists cannot contain and I for one look forward to their bumbling attempts to muzzle it. Personally I don't even think gunpowder weapons will be relevant in 10 years, they'll be replaced with rail guns printed out from garages.


I look forward to it as well. Minus conservatives, people of this country have become liars, propagandists, rumor mongering, pop-culture trend following, overly indulgent, far too extravagant, insanely vengeful, worryingly hateful, spiteful and general liars (I know I mentioned it once, but it's important). A liberal truly spits venom from their mouth when they "discuss" (AKA 'splain) any issue that matters to conservatives.

They are so sour over losing the election in such a huge and unexpected way, simply hearing the world "Trump" is enough to throw your garden variety liberal into eye-twitching, nail-biting hysterics. It will be the loudest, most shrill voice you've ever heard.

To a liberal, it is either their way or the scream/break/fight/smash way. We need to make them pay dearly in 2018/2020 for their antics. No moderate member of the Dem party should be without association to these big babies.

originally posted by: JBurns
Minus conservatives...

For every lying Liberal I can find an offsetting Conservative. Both sides are full of ****.


Shoot, while I'm at it, might as well grab some more HI-CAP ASSAULT CLIPAZINES

Don't get the typical sissy 30rnd hi-caps get a 100rnd drum. See if you can tape 2 together while your at it.

Just get a belt fed ar screw it.
edit on 7-1-2018 by UpsideDownWorld because: (no reason given) 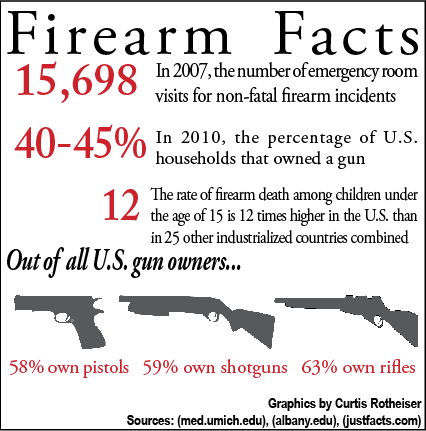 ha well I kind of like all the nonsense they are leaving libertarians alone, for the time being.


If you are looking at ar57 stuff, search some forums for recent production issues. I had to send 2 back before I just gave up on getting one. Got stuck with a bunch of the mags so ended up with a ps90.