posted on Jan, 7 2018 @ 06:33 AM
link
I must admit I am a girl who has always admired a man in uniform. Marines and Army men rate #1 in my book. Oh my. Next are tradies, motorcycle leathers (the full body suit and skull masks, not the tasselled harley jackets) and certain "other" leathers are also appealing. Mercy. Other uniforms however do nothing for me....sorry Nespresso guy who's wearing a lab coat like some kind of coffee scientist. No deal, guy flipping burgers at Wendy's.

Why do some women like a man in uniform? Are they seen as more masculine than other men?
What is it that we like in such attire?
What did women like back when every man was wearing a toga?

What do you find appealing about a man in uniform?

Forgive me Lord for I'm about to sin.

I like the ATF shirts, not a real uniform mind you. But they seem to have their priorities straight.

Also, fig leaf uniform! OG and approved by the Lord himself

I doubt that the soldiers ever wore togas.
I know what you mean, but I got no clue why. Group identification makes us hot. Maybe some secret longing for safety?


[ yes I bought myself a new Stetson for Christmas ]

posted on Jan, 7 2018 @ 07:59 AM
link
Seems to me that the government popularized the whole sexy uniform thing with their ads and commercials to get kids to join. " they also love a man in uniform"

I think I heard that in an old black and white recruitment video.


OP, you got to think carefully about this, lol.

Would you like Hitler in his uniform? He looked very smart. What about enemy soldiers in gangs come to do their business with the women of those they conquered?

When the British Boys were away in the trenches catching bullets and TB the British women were having affairs with American GIs for stockings. Women are shockers when the SHTF. Britain was losing the war big time and had to get the Americans in. We paid a price for that, be sure.

I totally understand why nature does this and I am not judging. I am a guy who lives very much in his feelings and emotions (too much) and I must admit I keep away from women. I have stayed a batchelor. I know just how deep the undying love of a woman can be; about as deep as skin.

Don't go looking for me to protect you though. You must fight your own battles now. I will never wear a uniform. They remind me of cannon fodder and all things state and evil about humans; a necessary evil it appears though.

Yucky yuck earth! You are a savage, lol (I mean the earth, not you OP).

It has to do with your values, OP. Even before I read your post I knew from your name, what you had said in another thread as a comment, and your avatar, that you would be a unniform appreciator. I think you put it all together as the proud nation staying orderly and the macho guy who maintains smartness and is not like Sloppy Steve; your Knight in shiny armour. That is very full of possible illusion and even delusion though ( "A Few Good Men" ring any bells, ding dong?).

I am not judging you slightly. It's the way it is.

Even monsters can look handsome, neat and tidy, all dapper for the girls to cheer for! 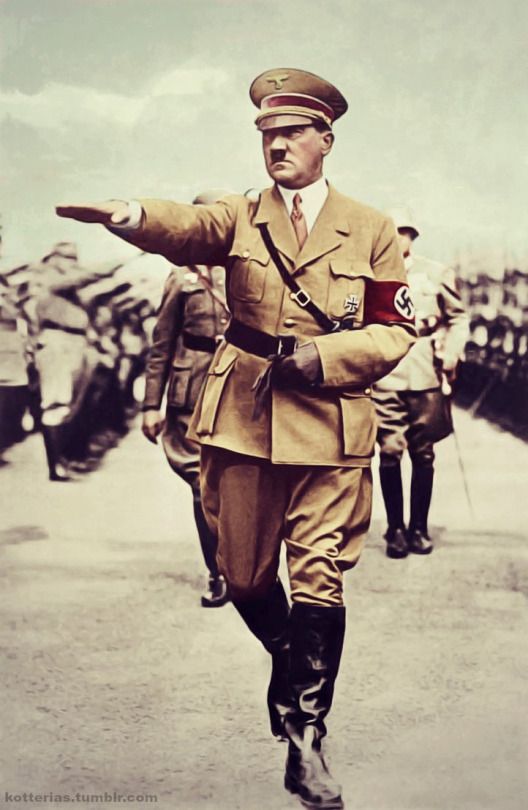 Ooohhh, aren't these nice Russian soldiers in Berlin so sexy and HOT??? 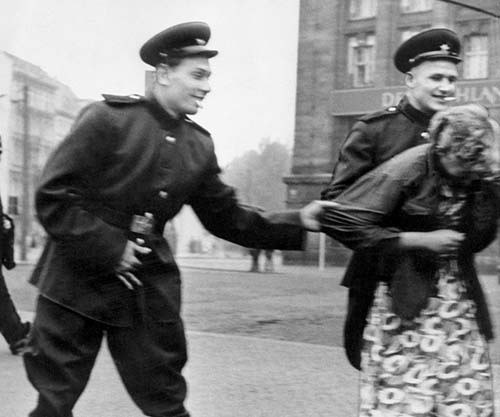 If you wan't your fix of men in uniforms you could always find one at the...YMCA!!! okay maybe that was a bad suggestion.

Who knows why we like what we like, I like redheads and I like a girl with a nose ring and a video game controller in her hands but I hate it when girls where a loose fitting Ramones T shirt without knowing who the Ramones are because it's a trend.

Different strokes I guess. Hell I look like I belong in a failed heavy metal band (which is half true) But I get a few looks, is it the way I dress? is it the that I look different from the other drones who all look the same? do they suspect me to be an alien in disguise scouting for victims?

Who cares if you like men in uniform, if that tickles your fancy then who cares? I think sexy blue aliens with tentacles for hair are hot, but those are video game characters which is an uncomfortable reminder of the joke that is my love life.

posted on Jan, 7 2018 @ 08:21 AM
link
Uniforms represent conformity. From Buddhist Monks to Catholic Priests to soldiers to police...it's all about conformity.

I find conformity to be abhorrent because of what it symbolizes. It symbolizes the crushing of the human soul and imagination.

What is the point? Conformity. I don't find that to be attractive at all.
edit on 7-1-2018 by antiantonym because: (no reason given)

You should be attracted to a "man" because of who he is - not shallow appearances.

Relationships fail all of the time specifically because they are based upon vanity.

In the case of military uniforms it symbolizes violent abuse and systematic murder, as well as unquestioning submission to authority and the belief that might is always right.

I have no idea why anyone admires that.

I think Peeple's reply of "safety" comes the closest to describing why women like men in a uniform that shows that they've either been trained to fight or just look like a bada$$ who can.

Despite the increase in feelings of safety while living in a modern, civilized, a woman’s instinctive desire to feel protected by a man hasn’t gone away. It’s a hard-wired instinct and it is difficult to ignore for even the most independent of modern women.

posted on Jan, 7 2018 @ 09:01 AM
link
Like maybe a school girl uniform?
Some people are really overthinking this.
You are just drawn to the look, nothing deeper.

Although I don't share your admiration I wonder if it could have something to do with them looking neat and tidy and orderly? Maybe it is the attention to detail that the uniform gives off.
I agree that it could be some sort of deep seeded sense of security but I wonder if that would be the case with some men who find women in uniform more attractive?
Think police officers or nurses or what have you.
A suit and tie required for work could be seen as a type of uniform so I wonder if it evokes a sense of financial security for some women?
I prefer more rugged looks, if going on looks alone.

Two things spring to mind. A man in a uniform always has a job, although, usually, a low paying one. Also they tend to be the kind of person who takes orders well and does what they are told. Uniforms are for people who want to fit into a certain mold. They are not for the individual or for free thinkers. They are for those who want to hide amongst a crowd and disperse responsibilities.

It happened at my high school, My best friend once wore a WWF (now WWE) shirt that said 'rules are meant to be broken' and pretty much had the book thrown at him, shortly after this every student was issued a detention ticket if they weren't in uniform. They stopped enforcing the rule after my friend and I racked up nearly two hundred tickets between us, he beat me 111-88 I think.

It doesn't matter what you look like as long as you get the job done. I might look like a scruffy lookin' nerf herder but with six letters I could tell how powerful a computer was, and would sell the most computers but noooo....lose the goatee and the rings or no dice even though I would be able to sell more computers than the manager. That's why I stay with gardening gigs.
edit on 7-1-2018 by Thecakeisalie because: (no reason given)
edit on 7-1-2018 by Thecakeisalie because: (no reason given)

posted on Jan, 7 2018 @ 10:20 AM
link
One of the reasons that the military style uniform has such an effect on the ladies is because the body it covers tends to be more ripped and swole than that of your average beta soyboy.

originally posted by: Kalixi
I must admit I am a girl who has always admired a man in uniform. Marines and Army men rate #1 in my book.

There are a whole class of women that love violent men.

Women are attracted to anger.

There are two reasons for this. The first is they feel they'll be protected from other violent men, if they have one of those for their own. And second, they feel they can "calm" this man's angered spirit with their own charm, and there's something sexy in "taming" the beast.

We've seen women even get infatuated with serial killers, to the extent of regularly corresponding with them in prison, and even going so far as to marry the murders while they are incarcerated. It's as if they feel they can "transform" these wayward souls by their sheer "feminine" powers.

it probably does speak to some subconscious desires about power and the social order, but be fair to the OP... i doubt many of y'all naysayers spend a lot of psychological bandwidth analyzing all the social implications of what turns YOU on.