Palace Intrigue and the Peeping Toms that Crave It.

Things that might have been deemed newsworthy in another era—the reduction of ISIS into a grease stain, the liberation of Iraq, a surging world economy, the mass-movement of people and the altering of cultures, the countless terrorist attacks against innocents, the assassination attempts against lawmakers and the rise in political violence, the escalation of anti-semitism, the rise in extremism, the decline of free speech, the decline of journalistic integrity, the ongoing wars—do little for our dear, self-serving media acolytes. Their energy is better spent elsewhere, namely, on feeding the addiction of anti-Trump schadenfreude.

If the top stories found on the “real” news outlets, talk shows, and among the twitterati are any indication, media consumers are more concerned about how a president is portrayed in a piece of gossip than any of the history-altering events and circumstances that goes on around them. And a vicious circle grows in circumference. The schadenfreude that necessarily dictates their every move, and the resultant obstruction of all reason in perpetuating it, only leaves everyone's circumstances worse off.

Such is the decaying sustenance of the media’s favourite consumers. Doing their best impression of a batch of starving nestlings, enraptured Twitter users routinely wait for the next hen to straddle them, and to regurgitate that sweet, eviscerated carrion down their willing, even begging throats.

No matter. In time, history will sift through the tripe and judge our current affairs at a sufficient enough distance from the allure of palace intrigue, and the peeping-toms that crave it. The popular opinions of the media and the twitter class will not even be a footnote on the historical record, their tittle-tattle no more than a fart in the wind; but their sensationalism, rumourmongering, and fanaticism will be duly noted.

posted on Jan, 5 2018 @ 12:29 PM
link
Only peeping Toms are the likes of trump and him strolling into dressing rooms when the girls are changing


Trump is "not" a peeping tom.

He likes to "be seen" doing the watching.

That's why he walks up and grabs them by the Billy Bush.

He enjoys the "voyeurism" of it all.

He ain't the hide and peep type.

The usual suspects have plans on preserving collections of the tweets, in print form,
as a form of historical disdain, protracted ridicule. You see, he simply was not
supposed to happen.

They’d JFK him, in a second, if they thought we would buy it.

originally posted by: LesMisanthrope
Palace Intrigue and the Peeping Toms that Crave It.

That's worth the flag right there. 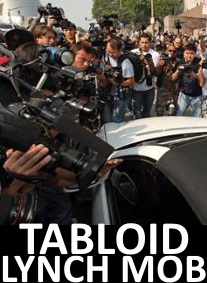 
This isnt even about Trump. Its about everyones obsession with him. Which by the way cuts both ways 'across the isle' just look at the front page today anyday.

He's in there now. We've got other problems besides his skin tanning methodologies and his Trumpisms.

Humanity still needs a savin' from itself and this trend is the icing on this turd cake we all keep cooking together as a species.

"According to a study by the University of Kentucky, party affiliation and the intensity of in-group identification strongly predicted schadenfreude in politics, even when the results meant objectively negative misfortune for innocents and society at large—economic downturn, the lives of soldiers, for instance. Political gain, once again, has proven more beneficial to tribal solipsists than the success and failures of their own societies. This is true of every party, candidate, and election. "

The Sweet Nectar of Anti-Trump Schadenfreude

That citation is exactly the stuff I'm trying like hell all year to run into, the what I call "Group Psychopathy Effect" where individuals in groups turn supremacist on a whim and out comes dehumanization (and downhill from there) that otherwise would never arise in the majority of the group members. Outside of the typical groupthink related terms and works, its been a surprisingly void subject in terms of prior works to go by so far in my usual fits of GoogleFu and scratching & sniffing around by usual means where normally I have too much materials to go by on oanyu other subject. I've realized its just so ingrained into us is goes unquestioned. No doubt, when you look at the SJWhatever crowd and societies acceptance of the logic, the very idea that their whole spiel is the same kind of supremacism as what they're supposedly against is absolutely unthinkable; would never come about via introspection, and when brutally pointed out as they love me to death for it finally just comes down to 'I'm good with it'.

I mean everyones heard stuff like groupthink, dehumanization, etc, but the 'Primal Tribalist Urge' down in our subconscious behind it -that also happens to be the glue hold civilizations together in the first place- this level of the matter is like an enigma in finding people ever talking about / that ever talked it to even have reference points to try and describe it.

"The masses have never thirsted after the truth. Whoever can supply them with illusions is easily their master; whoever attempts to destroy their illusions is always their victim."

Yeah one of the classics.

I'm trying to dig deeper at the underpinnings though. Into "the boogeyman" (inside everyone one of us)...

That made me smile, so star for you

I do respect you for sticking to your guns even when the going gets tough.

Concerning this massive media and social network attention on President Trump, to be honest if he just got on with the job instead of rambling on twitter I’m sure it would not be so bad

They should take his twitter away, because in the recent televised speeches in front of large audiences where many would fail from nerves he did well

It’s as easy as turning off Twitter and assessing the results. Give it a try. The media won’t.


Well hopefully we’re not making judgements regarding the results based on what we find on ATS. Facts are out there.

originally posted by: IgnoranceIsntBlisss
See what I mean: The Boogeyman.


You did nothing. I take my lack of flags and stars as a badge of honor.

While I have you here, what is this bogey man you speak of?
edit on 5-1-2018 by LesMisanthrope because: (no reason given)

Oh our human nature / subconscious, in my direct experience especially regarding groupthink / tribal urge. People seem to scatter when I get on the topic. But I find it most fascinating, its when we're all 'the same' the most like 'we all bleed red' kind of stuff.

Maybe I should switch back to Cognitive Biases & Fallacies for a while and see if get different results. Gotten kind rusty on those actually.

The American press has ALWAYS been tabloid. Were have you been?


You sound like its something unique to the Trump era, its not.


In Bill Clinton's time it was nothing but the scandal with Lewinsky.


This American press has always been the same