posted on Jan, 7 2018 @ 01:24 AM
link
Reading the Amazon page for the book a lot of the reviewers say they brought the book to stiff Trump stupid attempt to stop it

When a lunatic sitting in the whitehouse DEMANDS that a publisher halts the publication of a book that exposes that lunacy, I did what every red-blooded American would do. I immediately preordered it just to say '*F*** Y** #45. You can poison the air, land and water and make horrendous policies that hurt everything I hold dear, but keep your tiny ugly hands off my book shelves."


Here's part of the first review

Reading this book is like being forced to eat an entire 5 gallon carton of ice cream in one sitting. It is yummy and you don't want to stop. And then you do want to stop but you can't, because the book has you roped in. You should feel good, but in reality you feel awful, because of what you just did to yourself.

Have some ice cream folks
www.amazon.com...

originally posted by: testingtesting
a reply to: carewemust

Yes it all should be checked hopefully with tapes but the fact is the author did not say it is "mostly untrue".


He says "These conflicts, and that looseness with the truth, if not with reality itself, are an elemental thread of the book. "The definition of elemental is primary or basic...He basically just said conflicting stories and looseness with the truth (aka lies or exaggerations) are a primary/basic part of the book. He didn't use those words but he said the same thing.... The headline is no worse than many of the headlines I see everyday, even in non-political articles.

“I think one of the interesting effects of the book so far is a very clear emperor-has-no-clothes effect,” Wolff said in an interview broadcast on Saturday.

“The story that I have told seems to present this presidency in such a way that it says he can’t do his job,” Wolff said.

Fake story and horrible job by the OP you should be ashamed of trying to perpetuate this BS on ATS , much less any other news source

Your bias is noted
edit on 7-1-2018 by SailorJerry because: (no reason given)

try not to torpedo your own thread out the gate.

Again, how could that not be "an elemental thread of the book"? If you write a truthful book about liars then there are going to be lies in that book. If the author was to censor those lies then he'd make himself a liar. Maybe we agree about this, but OP was making it out like Wolff had discredited himself. And I agree, we see a lot of headlines of that caliber.

And what he said on TV does not contradict with the book.


And that is your opinion witch you are entitled to have.

My point is just that it is factually incorrect to claim Wolff has said is book is “mostly untrue”. 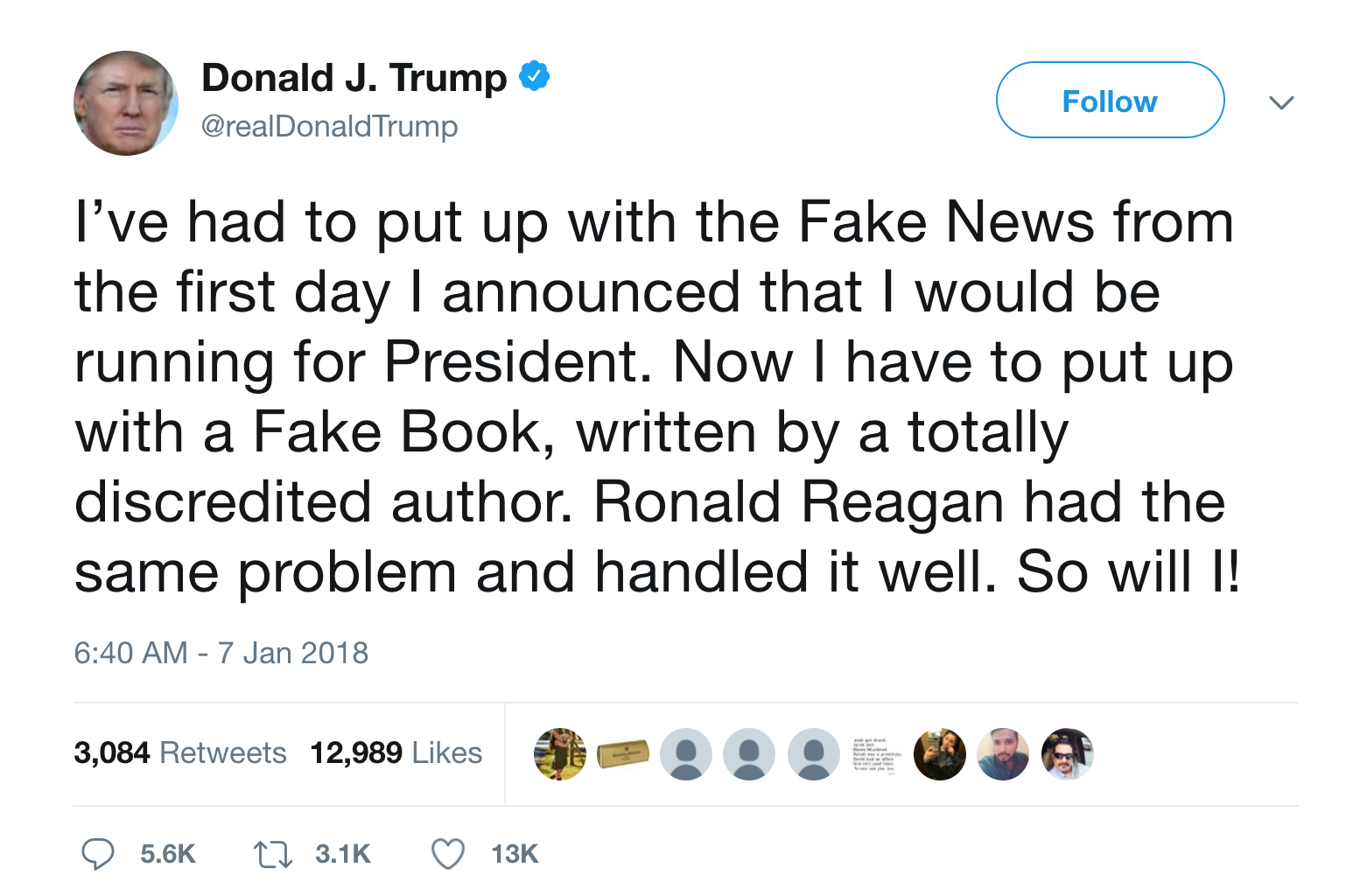 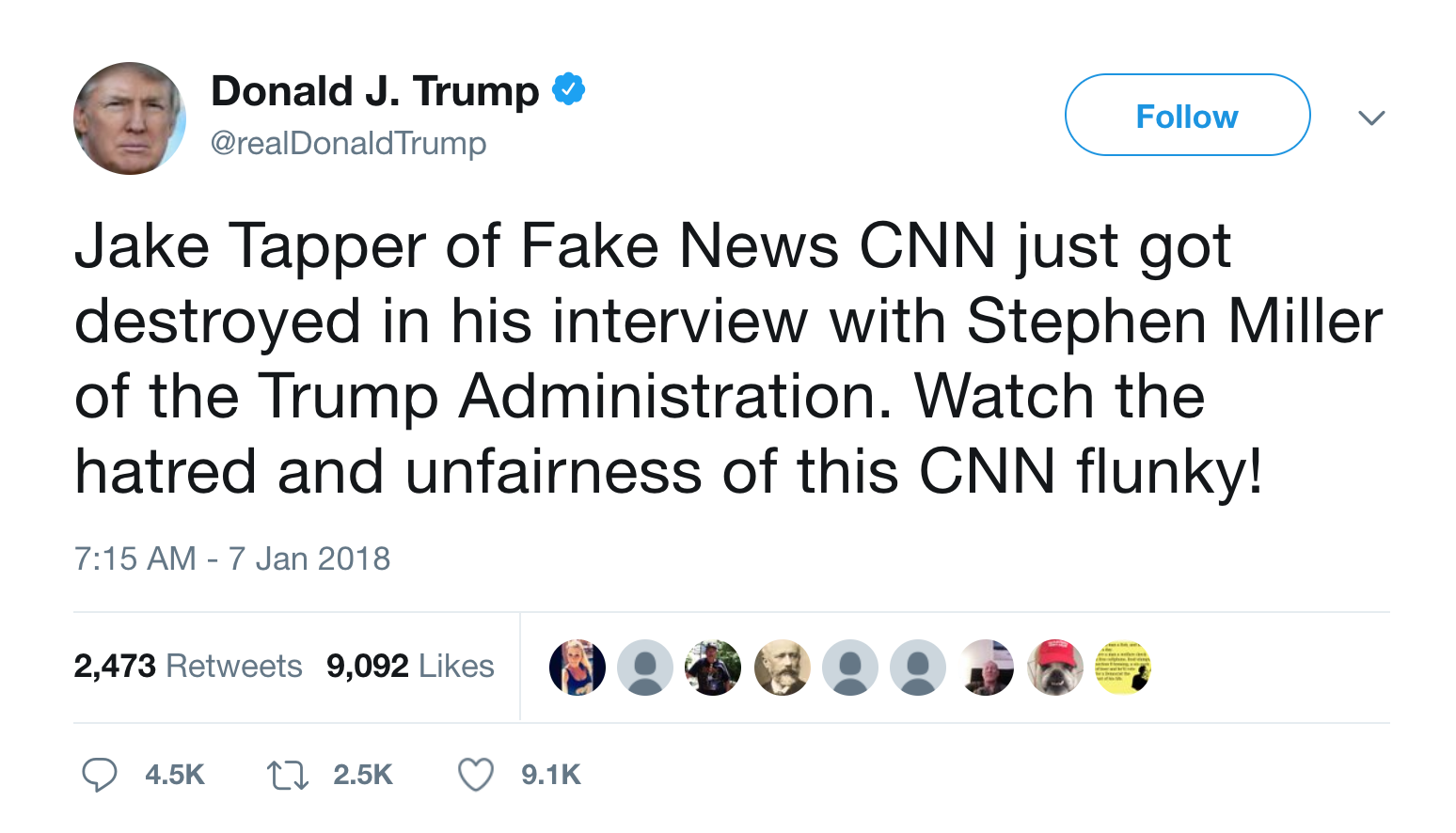 Fast forward to 2:25 if you wanna ignore the CNN propaganda.

Obama had his chance, could of done a lot of good with a media completely on side. Instead he sold everyone lies, politicized every institution he had and pushed the country to the brink. His Legacy will be President Trump. Thank you Obama
edit on 7-1-2018 by EvidenceNibbler because: (no reason given)

Glad to see they talked sense into him. Personally I think the smart thing to do would be to just ignore all the really damaging stuff in the book, and talk a little bit about eating hamburgers and wanting privacy from the SS; his core supporters would only like him more for that, just more proof that he's a man of the people. Or what about Ivanka making fun of his hair? That didn't make me think any less of either of them, just seems a like an easy-going dad-daughter relationship, where they can rib each other. And then enjoy some McRibs together in the master bedroom! Just a bit endearing.

And even the accidental presidency! Could that not be turned into a good thing? Is he not like a post-modern Cincinnatus? The Roman hero who was called to be Dictator and commander in a time of national emergency, only to give up his power and return to his estate to work the land in peace and quiet once he had done his duty, once they'd let him go home. That's how I'd spin it anyway, but maybe it's not totally realistic course of action. Obviously he'd have to change his story a lot then, that could be bad.

Looking on the bright side the book could also help him get his house in order, though I fear that no matter how many he fires there's always gonna be someone there to whisper in his ear, whether it be Bannon, his kids, the generals, or a man from the GOP.
edit on 7-1-2018 by Cutepants because: (no reason given)

It's noted? Oh no Sailor Jerry. I will make sure not to tell the truth anymore. Thank you so much. (end sarcasm)

What is funny is none of you really give a flea-fart about the author. None of you want to look at this history. What many people have said about him and his journalism in the past just because it is a book that makes Trump and his team look bad.

Obamacare mandate. Gone. Tax Package. Done. Wall. Being Built. THAT is what all of you should be discussing which is good for our country and not this hack.

If you want to know why they are acting like that towards Bannon read "Let Trump be Trump". It lays it all out there and the book does not make Trump out to be a Messiah. It paints a very good picture of the campaign and some things that occurred after the election. Seriously. Bannon wanted to come in and take all the credit for the entire campaign when it was actually a small group of core people. After reading the book I can honestly say I cannot believe that they won the election.

posted on Jan, 7 2018 @ 10:42 AM
link
and to follow up to the ABOVE POST Bannon Released this....it shows how Wolff was taking quotes or overheard discussions and making them something else including Don Jr's big revelation...Bannons words...


"Donald Trump, Jr. is both a patriot and a good man. He has been relentless in his advocacy for his father and the agenda that has helped turn our country around."

"My comments about the meeting with Russian nationals came from my life experiences as a Naval officer stationed aboard a destroyer whose main mission was to hunt Soviet submarines to my time at the Pentagon during the Reagan years when our focus was the defeat of 'the evil empire' and to making films about Reagan's war against the Soviets and Hillary Clinton's involvement in selling uranium to them."

"My comments were aimed at Paul Manafort, a seasoned campaign professional with experience and knowledge of how the Russians operate. He should have known they are duplicitous, cunning and not our friends. To reiterate, those comments were not aimed at Don Jr."

"Everything I have to say about the ridiculous nature of the Russian 'collusion' investigation I said on my 60 Minutes interview. There was no collusion and the investigation is a witch hunt."

"I regret that my delay in responding to the inaccurate reporting regarding Don Jr has diverted attention from the president's historical accomplishments in the first year of his presidency."


So, does this mean a retraction for a 'falsehood' should be published? Mercers are already off the Bannon ship....

Ronald Reagan didn't throw a tantrum when the press correctly observed that he was showing the early signs of Alzheimer's. Trump is proving the character sketch provided by Wolff to be completely accurate. Trump is acting like a spoiled child who has been sent to his room as punishment.

Except his room is the Oval Office and unlike your statements he is running the country like a champ. Take a look at your next pay check if you don't believe me.

When did Wikileaks become a piracy site?