No its not. I am misrepresenting nothing. I am using the authors own words and if you do not understand them oh well.

Yes, you did misrepresent his words. If you can't understand that...oh well.

You're being as honest as you can, but you just made up something that I never said. When did I said this book would be what you described?

If I had a history with that person at the bar as I did with some of you, I would definitely say it.

Don't make assumptions about me. You are most likely going to be wrong.


No its not. I am misrepresenting nothing. I am using the authors own words and if you do not understand them oh well


. I never cared for Bannon personally


. I don't believe in coincidences.

I think ill just let the actual evidence lay it out.

I have made no assumptions. I tried to be a civil and you still have to push it. I can guaran#intee you might say that to me in a bar but we would then beat the # out of each and have a beer and a shot. Best way to settle disagreements and make better friends.

The author of the explosive new book about Donald Trump's presidency acknowledged in an author's note that he wasn't certain all of its content was true. Michael Wolff, the author of "Fire and Fury: Inside the Trump White House," included a note at the start that casts significant doubt on the reliability of the specifics contained in the rest of its pages.

Several of his sources, he says, were definitely lying to him, while some offered accounts that flatly contradicted those of others.

You just want to blame Trump. Well if you think they were lies Wolffy WTF print it? 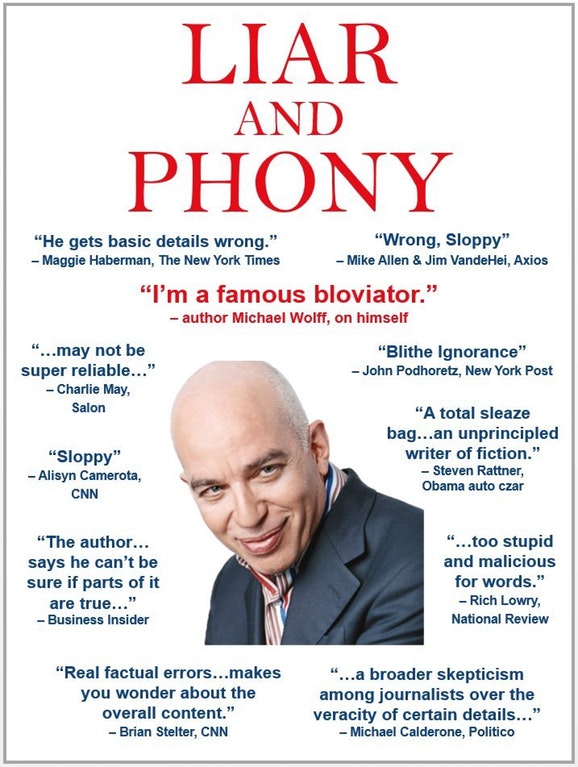 Wasn't me that said it, it was introvert.

Oh now you know none of those people can be trusted. They are all lying....

For a train wreck of a thread it's got a # load of flags, why do you think that is?


originally posted by: bigfatfurrytexan
a reply to: Byrd

I intend on reading it too (assuming time will allow). But im very interested in hearing your thoughts when you are done.

Oh yeah... and we're BOTH Texans. So that would make it totally awesome, you know.

I like this idea.
The gf just bought it on Kindle, so I may give it a read, also.

I'm more right leaning centrist, so I don't know if I'll have anything worthy to add, but I love the idea.

Wolff was NOT on the scene for a year, as HE claims. His only known point of access was Bannon, who was gone in April. This 'author' sat on a couch in the West Wing and tried to get people passing by to talk to him.

Given Wolff's track records, that's like saying, "Yeah, I know Hillary's a pathological liar, but don't discount everything she says." When you have that record, you are presumed to be lying and have to establish otherwise. In other words, you have no "credibility." Even the WaPo called him out. Credibility. Learn that word. And the assertion that people "were apparently open to him" lacks credibility. Do you think Trump actually said the things W. claims? Um, no. W. makes stuff up. Wiki him. There's This: In its review of Wolff's book Burn Rate, Brill's Content criticized Wolff for "apparent factual errors" and said that 13 people, including subjects he mentioned, complained that Wolff had "invented or changed quotes".

In a 2004 cover story for The New Republic, Michelle Cottle wrote that Wolff was "uninterested in the working press," preferring to focus on "the power players—the moguls" and was "fixated on culture, style, buzz, and money, money, money." She also noted that "the scenes in his columns aren’t recreated so much as created—springing from Wolff’s imagination rather than from actual knowledge of events." Calling his writing "a whirlwind of flourishes and tangents and asides that often stray so far from the central point that you begin to wonder whether there is a central point."

The Columbia Journalism Review criticized Wolff in 2010 when he suggested that The New York Times was aggressively covering the breaking News International phone hacking scandal as a way of attacking News Corporation chairman Rupert Murdoch.

But you know what? I could care less whats in the book. Trump is doing his job, and doing it well. Thats all I care about. He can watch the Gorilla Channel for 17 hours a day as long as he keeps producing results wouldn't you agreeeeeeeee?
edit on 6-1-2018 by EvidenceNibbler because: (no reason given)


Fox News host Laura Ingraham hit out at the author of an explosive tell-all book about the Trump White House on Friday for claiming she attempted to distance herself from President Trump as conservative commentators grappled with the unpredictability of the new commander in chief. "From Wolff book—this is TOTALLY FALSE. I was there! 'Distanced themselves from Trump'?! Total fabrication," Ingraham tweeted with an image of an extract from Michael Wolff's Fire and Fury: Inside the Trump White House.

Did you agree? Yes. No other input. No boo-boos.