posted on Jan, 6 2018 @ 08:03 AM
link
I think you clearly stated your intended results in the guise of a mystery if you ask me.
My proof is my simple ungrammatically correct mind is so confused by the circles you are spinning i have no idea what you just tried to say or even what the topic of the thread is. So i checked and reread your post... and dangit, I'm still confused

originally posted by: bulwarkz
I think you clearly stated your intended results in the guise of a mystery if you ask me.
My proof is my simple ungrammatically correct mind is so confused by the circles you are spinning i have no idea what you just tried to say or even what the topic of the thread is. So i checked and reread your post... and dangit, I'm still confused


It was a direct comment on the OP. If that helps. I just wrote it in a bit of a rush so apologies if it's unreadable!

Pretty much. OP ''seemed'' to have gotten an understanding of what was written about this book that was in opposition to what was actually said about the book in his links and the quotes. OP made claims that seemed to me to be overboard so I read the OP and found it to be not what was claimed in his headline.

As for the book itself, you are right on point. It seems an ''echo chamber'' book to me, written for those who want to believe what it reports. Gossip yes, hardbound.

Why do you feel the need to distort his words? Of course he has to add a disclaimer when people tell him contradictory things; if you've got Bannon saying one thing and someone else saying something else, then one of them is probably lying, maybe both. Wolff literally wrote that he chose the versions he believes to be true, what more can you ask for? And if there's too much uncertainty he leaves it up to the reader to decide for themselves?

Seriously? Is that a bad thing now? Have you gotten so comfortable in being told what to think, does every opinion that goes into your head need to be 100% preprocessed?

Wolff's methods show so much more integrity than if he just picked and chose the bits that he wanted and touted them as 100% certain. That's the kind of mind-set that has gotten Trump's foot into his mouth over and over again, whether you want to call it lying or ignorance, it doesn't really matter. What matters is the end product.

Just take the book for what it is, no one is forcing you to believe anything you don't want to believe. Those with an open mind may find it interesting.
edit on 6-1-2018 by Cutepants because: (no reason given)

posted on Jan, 6 2018 @ 11:03 AM
link
Liberals big win for the last 2 years is some book written by some broke bum they never heard of that has notes in it saying most of it's false.

This is hilarious. Thank god I'm on the Trump side. I am really, really starting to get tired of winning so much.
edit on 6-1-2018 by TheGOAT because: (no reason given)

posted on Jan, 6 2018 @ 11:04 AM
link
But the source of much of the information has been utterly annihilated, "Bannon".
Also remember Ben is against Trump, but some enemies are higher up the ladder, and it's utter joy when they fall and very hard. Bannon is toast and anything he has to say is now garbage. 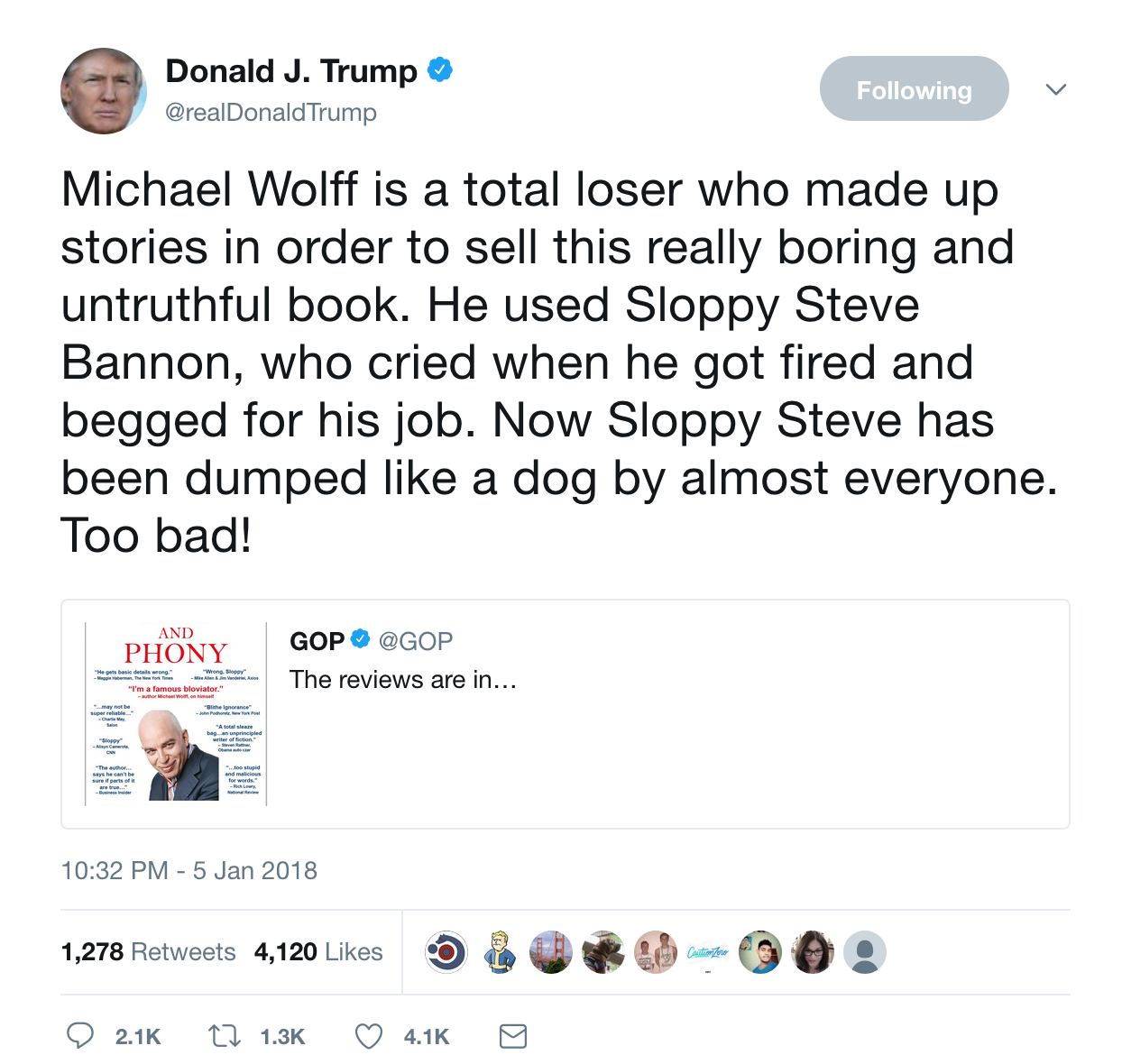 I predict that Bannon's going to decide that his latest effort to make nice to Trump is not worth the trouble and that Bannon will be the next to turn against him. Perhaps he'll even approach Mueller with information.

There's reports that more of Trump's staff will be quitting. We'll probably have other "tell-all" books about Trump from some of these people (and probably challenges to non-disclosure or maybe ways around it such as having emails "accidentally" stolen by hackers willing to release the documents.)

I am simply doing exactly what the author did. He states there are falsehoods and non-truths. The title of the OP is

which is true from the author himself. I am not making anything up like the author did.

I will reiterate from the OP .

In other instances I have, through a consistency in the accounts and through sources I have come to trust, settled on a version of events I believe to be true."

This is called making up bull# in real life....

Libs don't care about America, in fact they would rather see it fail than for Trump to succeed. Sickening.

And that effort will be their undoing, because all normal people love this great country of ours. Due to the FOUR Clinton, Comey, Lynch, Obama probes being launched, Libs will lose what little power they now have in America. A tragic but fitting end.

Are you seriously saying that Democrats are not normal? Seriously?

There are people all across the spectrum who aren't normal. Common sense. "Normal" U.S. citizens love this country.


Why bother explaining the obvious to people who ignore what you have to say? Don't waste your precious time like that, MataFuchs.

Wolff admitted that the content of his book is the equivalent of throwing pies against the wall to see what sticks. Doing that with the President of the United States is wrong, however. Hopefully Wolff and his publisher will not be able to keep a dime in royalties.

posted on Jan, 6 2018 @ 01:57 PM
link
Wolff admitted nothing of the sort that OP is trying to claim. If you read the disclaimer in context in the introduction it is saying something very different to what Trump supporters are trying to claim is says in this thread.

It's really more saying that reality is so malleable in the Trump white house that what is 'true' varies depending on who you talk to at any given time.


OPs quote is totally out of context. And to be honest this thread should probably be moved to LOL.

Because it is my thread I guess... Happy New Year!

It's not a matter of perception or interpretation.

It's a matter of you misrepresenting what was said for your narrative/agenda.

But we know you lack the testicular fortitude to be honest about what you did.

Yeah you don't kick a dog thats in a corner they bite back.

originally posted by: EvidenceNibbler
a reply to: introvert

No its not. I am misrepresenting nothing. I am using the authors own words and if you do not understand them oh well. I will not lower myself to call you names like you tried to do with me though intro. I consider your posts usually at least comprehensible if not sometimes over the top but at least polite but this time not so much.


Defamation (including libel and slander), you are ok with that?