originally posted by: Arnie123
What did I say?

Thats a bit much no?

I said I dont mind criticism of leaders.

If this tabloid nonsense is your cup of tea then drink until you drown for all I care.

Dont point your nose at me for not falling in line though.

This is dirty underwear. Not anything needed to know about a president. This is about Trump personally as told by someone he fired for having a big mouth and little professional demeanour.

The book itself is indeed open to criticism. Your stance is right, but its not even your post that I find bothering...I just sort of stopped there.
I am more concerned with others before your first page post suggesting all MSM is just tabloid fake news.
This book is made to sell by someone with links to the inner circle, so it would be news if someone on the inside came out and said the place is a madhouse.
Now, debunking the stuff said should be done if possible, but lets not suggest the entire book is nonsense to begin with. I dont doubt plenty in the admin think bossman is a idiot..hell, most people working anywhere think their boss is an idiot. Is it relevant? well, this could be a debate point considering this potential idiot has presidental authority to get bombs dropping

...but we also have checks and balances for that. This book and a lot of other criticism is to devalue the POTUS as usual (as done with every other president since I've been alive anyhow) in order to allow house/senate to not fear opposing stuff that is dangerous if they consider it might impact their reelection. Thats always a good thing overall.

Is the book full of libel?...well, we can watch for lawsuits down the road I suppose and see

posted on Jan, 5 2018 @ 08:22 AM
link
The Two Party + MSM System attempted to screw US once again with the "choices" being Hillary or Jeb. Trump battered his way in and messied up everyones day. He's a messed up dude, facing the most diabolically corrupt system in human history.

How messed up he is, or how much we love it, is all that matters?

If we all all we do is point our heads at Trump then the Corruption wins, whether or not he's truly part of It, It is pointing US at him and we're all being suckered. That's It's Trump Card now.
edit on 5-1-2018 by IgnoranceIsntBlisss because: (no reason given)


People can defend him all they want. trump has proven how childish he is time and time again..Remember the SNL tweets....'It should be taken off the air' 'terrible show' He had a MELT DOWN at three in the morning over the episodes. Sent tweet after tweet about it. Even though he had been on the show just months before....ALL it did was give SNL the best season ratings, they had in YEARS.

Then we have the 'my rating were higher than yours tweet' picking a fight with Arnold S, over the apprentice ratings. Again Via twitter, and in the middle of the night.

How about all of the Obama tweets? 'they WIRE TAPPED me and I have proof' This tweet of coarse took place, as RUSSIA was starting to take the spotlight.

Of coarse trump loves to say he has PROOF in BOLD LETTERS IN HIS TWEETS, then he provides ZERO....He has done that more than once, he also did it in regard to the fallen soldiers wife. Funny how she was blasted for talking about trump not knowing his name, and how it was WRONG for her to have had him on speaker phone. Funny how another phone call the POTUS made to another fallen soldiers wife months before, was saved and also on speaker phone. That phone call being on speaker phone was OK though, because trump was very presidential during that phone call(one of the BEST conversations I have heard trump have BTW, he was great).

trump is a big baby. Rewatch the debates with Hillary....He constantly interrupted her, like a big baby, he could not wait his turn.

I don't need a president, who requires DAYCARE.

We can't all be Andrew Jackson.

But what is gossip?

idle talk or rumor, especially about the personal or private affairs of others:
the endless gossip about Hollywood stars.

BUT, just because it's gossip, doesn't mean it isn't true, or has no value. Some of it looks like a devilish peek into the West Wing.


There is very little doubt in my mind Trump and Bannon are trolling us all with this. Tabloid sensationalism at it's manipulative best. It even induces uncontrollable drool from mono thought hungry dog politicos.

What's my biggest clue? Where is the meat? There is nothing here but tabloid gossip directed at their enemies. These guys look brilliant. Look at where everyones attention is. Crazy really.

Like a 3 ring circus. They are directing everyones attention to where they want it atm.

And the idiots that write this,never have taken into account he has amassed a buisness empire,without the governments help,who is acting like an F ing child,the Democrats who can't stand not having their way,will make lies trying to get other mindless fools to follow their ways


And have the POTUS evaluated by professionals.


What "professionals"?
Who makes the standard they are looking for?
How often will he be "evaluated"?

Who could walk away?

Actually there have been many many people who have left.


All you have to do is go to the Wiki and read.

That kind of ends that conversation

Better than taking anything at face value like some folks."I got some ocean front property in Arizona and if you buy that I will throw the golden gate bridge in free" -
George Strait - "Ocean Front Property"
I hope you didnt really believe that , or did you ?
Just saying
Do your due diligence.
Took me 2 minutes....
Of course it didn't fit the hate Trump agenda , huh ?

Walter Reed. Every POTUS has a routine health evaluation there. Let them do a brain scan. It may reveal amyloid plaque build. Or not. Win/win for the nation.

I read the op title. And this is all i have to contribute. 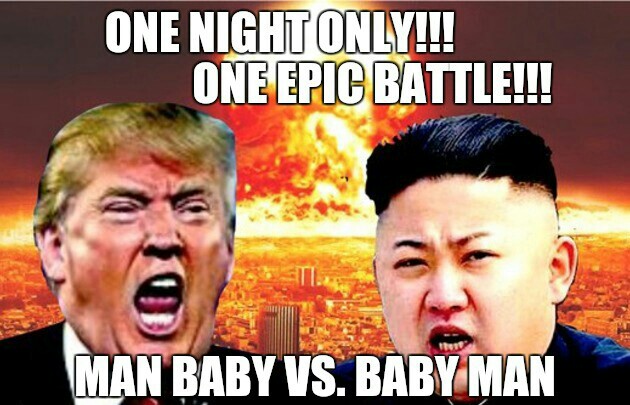 
1. This book has already been shown to have too many inconsistencies, misquotes, and outright wrong claims to be taken at face value, and

2. Nobody completely likes their boss, ever, in any job...why should working under the POTUS be any different?

3. You're taking the author's word, whose absolute goal and job it is to justify claims in his book in order to legitimize the book and sell more copies, at face value?


I'm no Trump fan concerning his obvious immaturity in certain ways that he conducts himself, but damn, the answer isn't, "Let's just take the author's word for it and believe it to be true because he both wrote it down AND reiterated it during an interview."
edit on 5-1-2018 by SlapMonkey because: (no reason given)

And we're all going to see everyone meet in the middle against the Corruption as long as your campaign strategy persists.