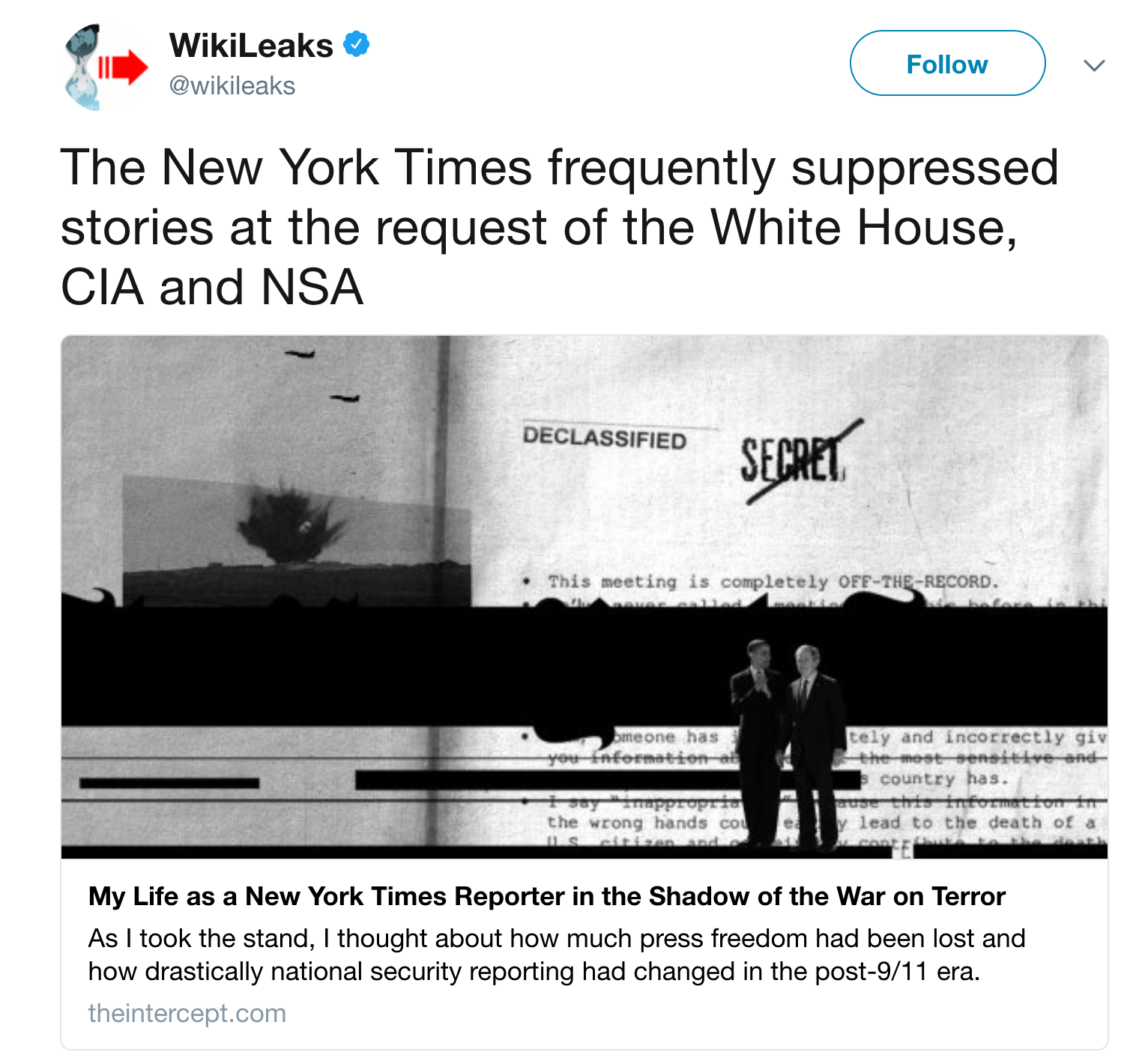 My case was part of a broader crackdown on reporters and whistleblowers that had begun during the presidency of George W. Bush and continued far more aggressively under the Obama administration, which had already prosecuted more leak cases than all previous administrations combined. Obama officials seemed determined to use criminal leak investigations to limit reporting on national security.

But one incident left me questioning whether I should continue as a national security reporter. In 2000, John Millis, a former CIA officer who had become staff director of the House Intelligence Committee, summoned me to his small office on Capitol Hill. After he closed the door, he took out a classified report by the CIA’s inspector general and read it aloud, slowly, as I sat next to him. He repeated passages when I asked, allowing me to transcribe the report verbatim. The report concluded that top CIA officials had impeded an internal investigation into evidence that former CIA Director John Deutch had mishandled large volumes of classified material, placing it on personal computers in his home.

The story was explosive, and it angered top CIA officials.

Phenomenal piece, this guy covered some of the most sensitive national security stories of the last 20 years and has some interesting things to talk about....

Obama prosecuted more Whistleblowers under the Espionage Act, than all the previous Presidents combined. (I think it was about 8.)

Obama used it to prosecute American whistleblowers divulging US government crimes, to the American public, via American journalists.

posted on Jan, 5 2018 @ 03:30 AM
link
They are a liberal paper always been what else is new,just more of media BS to appease the dead brain libs

Considering how he used the IRS, FBI and other govt agencies to go after anyone who exposed his agenda, I'd say The Truth.

ETA : It's a long article, but well worth the time to read. It highlights the fact that govt will go to great lengths to hide the corruption and abuse of our Rights.
edit on 5-1-2018 by DAVID64 because: (no reason given)

Good thread. The Obama administration was a terror on the media. Corporate culture within their ranks kept the victims going down while ball players became rising stars.

Does no one remember that Obama officials LOCKED REPORTERS IN CLOSETS!?!?

Literally threw them in closets and locked them in so as to silence them /send a message. Just to give ONE example.

Thats why I say, BURN THEM ALL. They laughed and paraded around like untouchables.

Now they woke up because Trump is POTUS. The people that elected him also woke up, grumply.

No more peace. Set it off.

More from the article linked in the OP:

While covering the CIA for the Los Angeles Times and later the New York Times, I found that patiently listening to my sources paid off in unexpected ways. During one interview, a source was droning on about a minor bureaucratic battle inside the CIA when he briefly referred to how then-President Bill Clinton had secretly given the green light to Iran to covertly ship arms to Bosnian Muslims during the Balkan wars.

posted on Jan, 5 2018 @ 05:27 AM
link
This is essentially state run media, which is what happens in communist and fascist countries.

Obama and his administration were fascists.

"There is no such a thing in America as an independent press, unless it is out in country towns. You are all slaves. You know it, and I know it. There is not one of you who dares to express an honest opinion. If you expressed it, you would know beforehand that it would never appear in print. I am paid $150 for keeping honest opinions out of the paper I am connected with. Others of you are paid similar salaries for doing similar things. If I should allow honest opinions to be printed in one issue of my paper, I would be like Othello before twenty-four hours: my occupation would be gone. The man who would be so foolish as to write honest opinions would be out on the street hunting for another job. The business of a New York journalist is to distort the truth, to lie outright, to pervert, to villify, to fawn at the feet of Mammon, and to sell his country and his race for his daily bread, or for what is about the same — his salary. You know this, and I know it; and what foolery to be toasting an "Independent Press"! We are the tools and vassals of rich men behind the scenes. We are jumping-jacks. They pull the string and we dance. Our time, our talents, our lives, our possibilities, are all the property of other men. We are intellectual prostitutes."

John Swinton (1829–1901) was a Scottish-American journalist, newspaper publisher, and orator. Although he arguably gained his greatest influence as the chief editorial writer of The New York Times during the decade of the 1860s, Swinton is best remembered as the namesake of John Swinton's Paper, one of the most prominent American labor newspapers of the 1880s. Swinton would also serve as chief editorialist of the New York Sun during two stints totaling more than a dozen years.
Link

posted on Jan, 5 2018 @ 06:14 AM
link
Typical NYTimes performance. As "the paper of record" its most important that the propaganda starts there.

Leftists the world over should know that.

It's a disgrace that our politicians have somehow evolved to a point where they believe their decisions need to be hidden from citizens. The UK is almost as bad and recently lost its Top 10 position for press freedom. We're now rated 40th in the world and the USA is 43rd. Can you imagine that? So-called bastions of the 'Free World' and there are now 40 nations ahead of us.

Essentially, both nations have made whistle-blowing a crime. It's topical to slant it all as a partisan issue when it really isn't. Either side reduce press freedom one notch at a time like a ratchet. Each successive leader makes decisions they're embarrassed to let their electorate know about. They want to hide their actions from history and push through legislation and FISA court deals to protect their own interests.

I sincerely believe their short-sighted decisions are going to drag all of society down into oppression. They are seizing freedom without responsibility. They are removing accountability and that's a very dangerous direction to take any government in.

Hey Mister Reporter Man, how about all the 'Stories' they promoted for the State of Secrets?

I tried reading into the linked article in the Intercept. Its long, winds everywhere, over common ground. But okay, someone else droll thru it and show me one place it points to anything not already in the Public Eye...

Newspaper taxis appear on the shore

A lot of us train spot the different media sources to see where the OSOTD varies.

ATS is interactive alternative media so we have the ability to network and channel readable resources.


This is about the Alpha Bets perusing articles before the Editors, so of course some articles were suppressed.

The media You see/read today is what You get when You allow government to shadow EVERYTHING that goes through the presses...

This is par for the course if you are the POTUS-Everyone else in their peripheral vision is expendable, and have abused their powers and swept their misdemeanors under the rug.

LBJ-used to flash female colleagues, Nixon-no explanation necessary, Reagan-threw Oliver North under the bus to save his own hide, Clinton-caught lying, George Dubya-Started a war because of non existent WMD's that took thousands of lives...the list goes on and on.

It's no surprise that we have revolving door politics because we can't trust our leaders anymore, it's political hokey pokey.

'You vote the left wing in and kick the right wing out, then you bring the right back and shake it all about...'

The movie "conspiracy theory" is on topic for this thread?
Only the OP knows for sure.

NYT is a failing newspaper company. Not too worried about it.


When you are the CIA, it is easy to blackmail people. Maybe a reporter.... but if it were me running the show, I would blackmail the owners and editors of newspapers/news media organizations.


Your scenario is probably closer to TheTruth than anyone would like to admit. I'd be willing to crawl out on that proverbial branch and guess the owners of said rags are folks that would self-describe as being 'Elite' This is a sub-section that 'think they are elite' so these folks will 'co-sign' any/every thing that would benefit the real, real 1%. I only mention this because One would have to be 'fooling themselves' to think that there is a fair and balanced judicial system and those at 'the top' don't play by the same rules as the rest of Us, ergo, if one of their own sips their pants it has to be good....