page: 1
29
log in
join
share:
jadedANDcynical
+9 more
posted on Jan, 4 2018 @ 04:53 PM
link
In perusing various locales on the net, I happened across an interesting tweet which lead to an even more interesting story.

Did the ATF conspire with Wells Fargo and forge documents in order to carry out a part of the Fast & Furious campaign?

That's just what this person is alleging. And what's more, they say they have documentation to back it up.

Tom, pls help us as our gun shop was involved in the Fast and Furious gun runner scandal, we have full doc's to provide to you on how ATF and FBI forged our FFL and bank doc's to secretly buy, sell and transfer money and assault weapons illegally.

This is him tweeting to Tom Fitton for help, he has also tweeted and been retweeted to numerous other media persons and members of congress. One of the items posted on his twitter is a letter from Kathleen M. Rice to Special Agent Robert Erickson of the FBI: 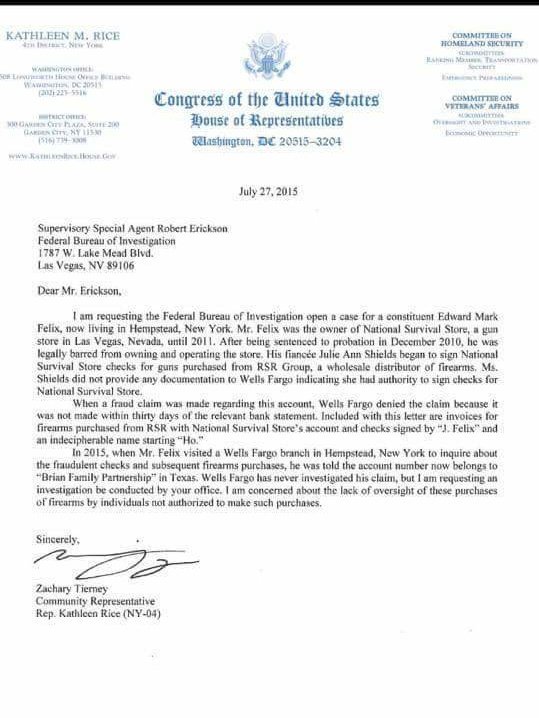 They also have a letter from Wells Fargo in response to a subpoena wherein they show that the ATF had instructed them to not produce any more documents to the owner of the account which was used in order to pay for the guns that were part of the program: 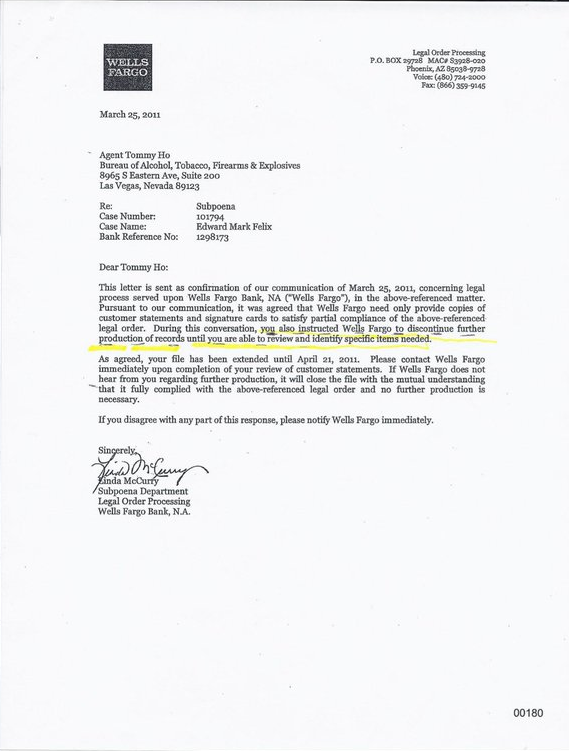 They have a cancelled check that is not signed by any authorized signer of the account: 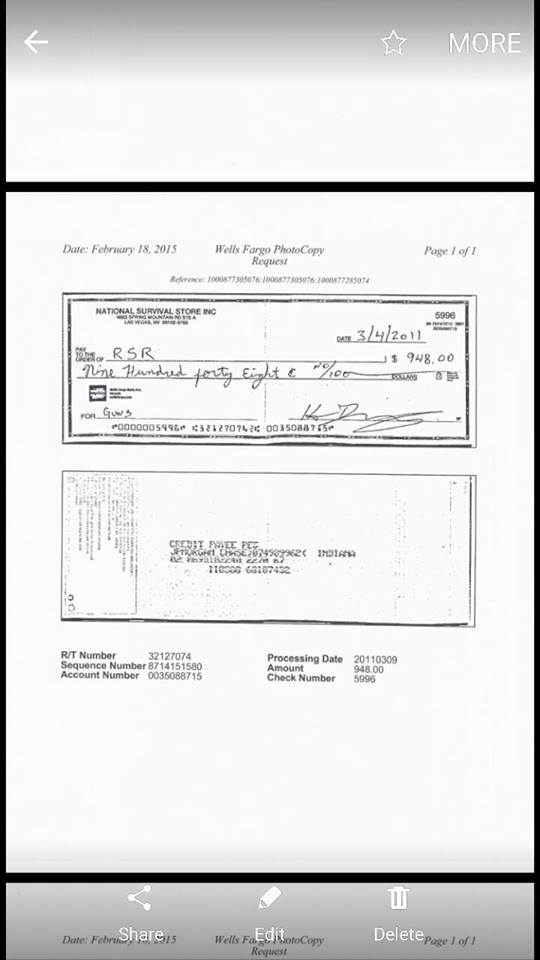 Here is the forged FFL: 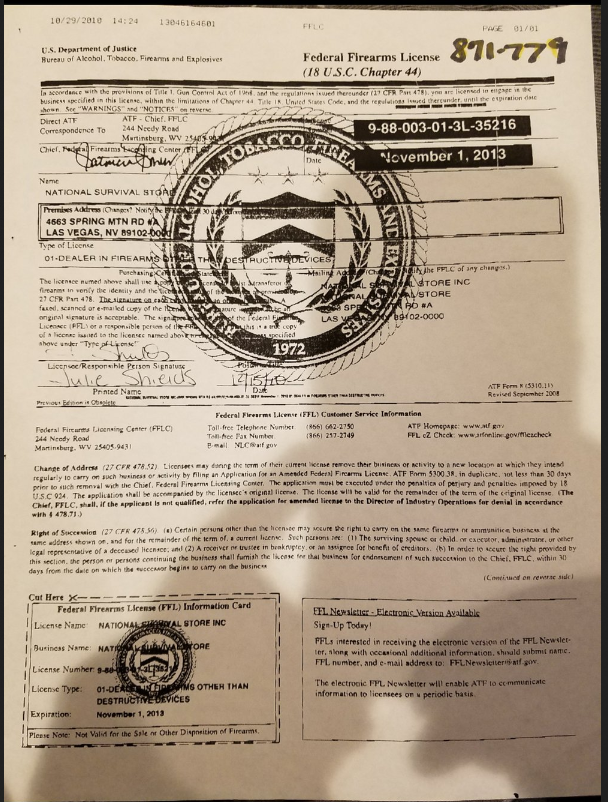 This is their original FFL:

Here is the ATF sworn statement with Julie Shields wherein she admits to not being authorized to sign on the account: 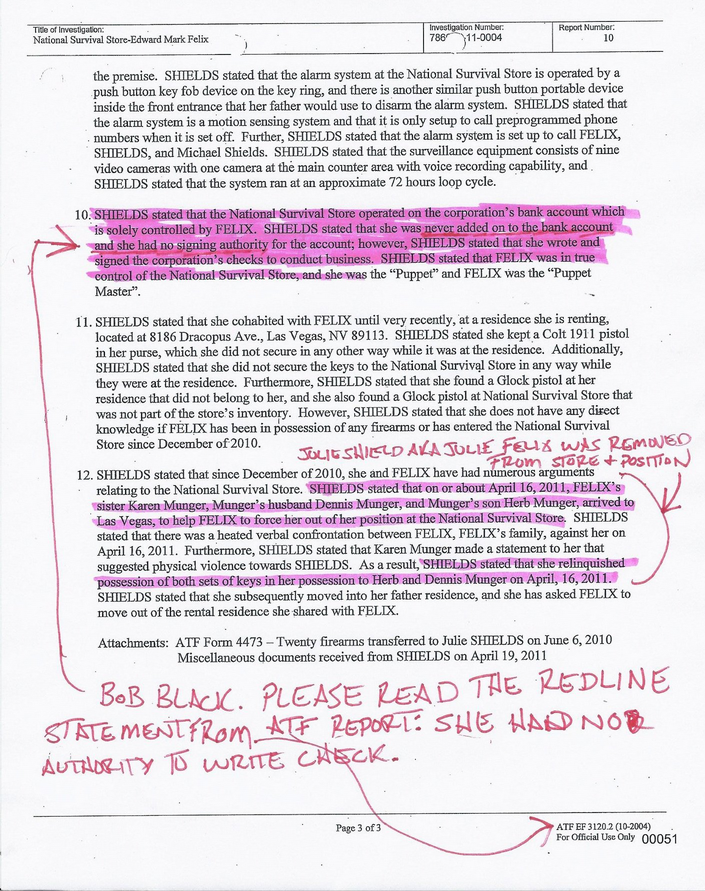 All of this and more can be found on the media page for this user.

There is much more to the story than I have managed to include in the thread, the details are spread out over numerous tweets and replies to retweets. I encourage any interested reader to follow up and bring back any relevant and pertinent information in order for us to be able to put together a clear and concise picture of these events.

Almost forgot the best one, here is a picture they have of ATF agent Tommy Ho (the one who ran the part of the operation under which guns from the their store were moved) in their store:


Everyone note that Robert Mueller was part of Fast & Furious decision making; that title was only the new name Obama's team put on Bush's old "Gunwalking" program. Which when put in into the pattern of the State Dept. also funneling military grade weapons (50 cal's, grenades, rocket launchers) via "Direct Commercial Sales [DCS]", under both Bush & Obama, at the same time the DEA was partnered with El Chapo in taking out all his competition costing only 60,000 Mexican lives, quite a coenkeedink.

And they have had US all convinced and divided over the wide open border being about "immigration".

Are we surprised? Just more of the corruption of the past administrations bubbling up. They got the idea that the laws didn't apply to them. So far, nobody has been brought to justice for this wild-west law-breaking. Innocent people have lost their lives/liberty due to these outlaws. Will Sessions be the one to seek justice and rein in the outlaws?

posted on Jan, 4 2018 @ 05:17 PM
link
And these same people will come after you, and put you away in a federal prison if your rifle or shotgun barrel is 1/2 inch too short. Sickening.

ETA: Things like this are the inspiration for my name.
edit on 4-1-2018 by UpsideDownWorld because: (no reason given)

posted on Jan, 4 2018 @ 05:17 PM
link
Here is the reddit thread on this topic. It has also made appearances on the chans as well. Hopefully if enough interest is generated in these places the story will make it to a national platform and gain even more exposure.

It looks like Tom Fitton has responded to the Reddit thread and so said national exposure may be forthcoming.

posted on Jan, 4 2018 @ 05:25 PM
link
Well, Wells Fargo (Wachovia) did launder hundreds of billions for drug cartels without anyone going to jail. I guess a little gun running and forgery are no big deal.

When we first moved down here and saw the "Wachovia" signs we'd say "watch ova ya money" in a mafioso voice. 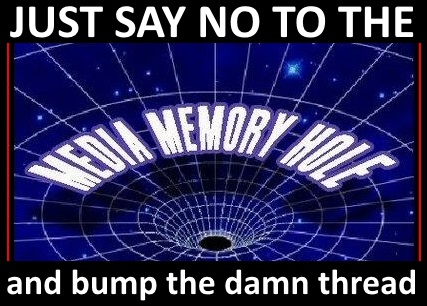 I kinda got buried by other habbenings today what with Nunes letter and the ruling against Fusion GPS in trying to hold back their bank records.

I know people only have so many flags they a can give out in a day, so they have to save them for the really important threads, but just commenting gets a thread into that 2nd tier and then the 'less important' stories can still make the front page.

This War on Drugs thing is really interesting concerning the Republican / conservative types. Where's the outrage?

Supposedly drugs are so bad that people deserved to be locked up potentially gang raped or shanked for possession, yet when we see the government facilitating them all along we're not going to rage against the machine?

At least the liberals tend to have some energy in them on this stuff, except if it's Obama guilty too?!?!?

This thing its tearing US all apart, and pitting US against each other and its time to put a stop to it. Together.

It's fiscal. It moral. Its immigration. Its all the issues plaguing our nation, the world, our families, they all trace back to this topic.

...just commenting gets a thread into that 2nd tier and then the 'less important' stories can still make the front page.

Did not know that, learned something new so thank you!

I found an article on a specialty site from 2016:

USA -(Ammoland.com)- The former owner of National Survival Store in Las Vegas alleges multiple improprieties resulting from Bureau of Alcohol, Tobacco, Firearms and Explosives oversight, and his protracted quest for answers is stalled without an enforceable official inquiry.

Edward Mark Felix’s story is complex, ranging from allegations of being directed to allow straw purchases similarly to methods revealed from Operation Fast and Furious, to claims of stolen guns, to being squeezed out of his store, to FFL renewal irregularities, to claims of having illegal tracking devices placed on his car, and more. He has been trying to gain attention and an investigation into his claims for years, with extremely limited results and plenty of stonewalling by those who could provide the clarification he seeks, but won’t.

I found only one mention of "Brian Family Partnership" on the entire internet that is not related to this story:

No idea if it is related, but perhaps a thread upon which to tug.

5 pages of comments makes that 2nd tier with almost certainty on even a 2016 campaign frenzy day.


Mueller is dirty as hell.

Check out his Gulen connections and CIA.

That's why he went after Flynn.

I didnt spot him in my scratching at Gulen this week.

Brian Family partnership in Texas was given our acct in Nov 2010 by David Mooney who,was a financial officer who opened it for a friend of his family. George and Marion are the acct holders. We have audio recording of our convo confirming they had our acct number

We have ATF redacted bank statements Mark redacted out of scope, then we went to NY and got the UNREDACTED statements they never sent. But WF in Hempstead NY told us good news, we have the missing statements, bad news, you can,no longer come back to this bank again. Wow. Corp. got word we were there and notified them.

Hello and welcome to the thread and to ATS!

Your story really deserves much more attention than it has been given so far.

Please feel free to share any information you have and post images of any supporting documentation. If you need help on learning how to post images, check this link.

We don't have the capacity to host audio files, but you can always link to a site that does have the ability in your post.

With regard to David Mooney: