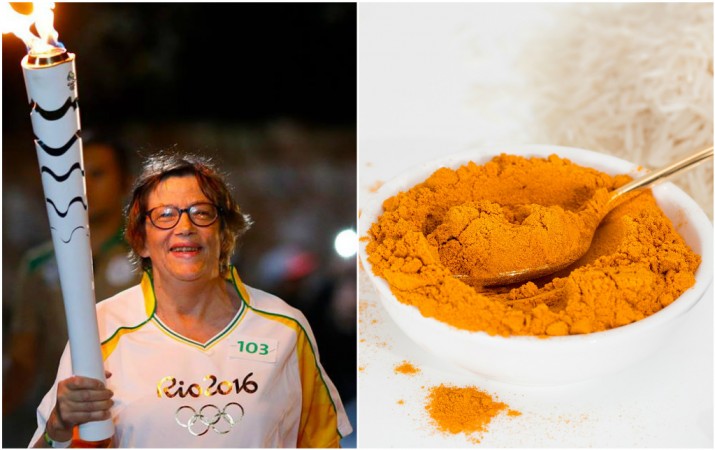 A woman who has been suffering from blood cancer for a decade has finally stalled the terminal disease, that too with the help of turmeric. Dieneke Ferguson shares her story of how she's finally living a normal life after giving up on treatments that just wore her down without any success.

Even though doctors claim her case is a first of its kind where spices proved to work after conventional treatments failed, her type of cancer was also reported to have an average survival of just five years.

Even after three rounds of chemotherapy and four stem cell transplants, her cancer kept spreading rapidly – but that was until she started taking a daily dosage of 8g of curcumin – one of the main compounds in turmeric, which is responsible for its bright yellow colour.

Her doctors, from Barts Health NHS Trust in London, wrote in the British Medical Journal Case Reports: "To the best of our knowledge, this is the first report in which curcumin has demonstrated an objective response in progressive disease in the absence of conventional treatment."

Well, another test subject provides another strong example of Tumeric and its aid in battling cancer. Even her doctors acknowledged this finding, although they did not want to say it cured the cancer.

Maybe they need to swap conventional treatment with natural treatment, oh my bad, Big Pharma won't like it too much.

posted on Jan, 4 2018 @ 11:30 AM
link
Hell yea, good for her. I hope she lives many more years to spread the word for alternative choices on trying to battle the type of cancer she has. My cousin currently has the exact same diagnosis, so I'll spread the word to her as just something to try while in treatment.

posted on Jan, 4 2018 @ 11:57 AM
link
Turmeric does have some anticancer properties, but some people cannot metabolize it well and it can cause problems because of that. If a person does not metabolize it well, they can still eat a little, in fact a little becomes a medicine to treat many diseases and conditions. I'll take my turmeric with the foods that are cancer causing. Mustard goes good on hot dogs and balogna sandwiches. It also releaves some kinds of muscle cramps, all you need is about a half a teaspoon for the cramping.

I am iffy about saying that turmeric is good for everyone. I will say it is a medicinal plant that can be used to treat some things. I have problems with sulfonamides, turmeric has sulfonamide properties and I do not seem to handle it when I eat over a small amount in a day. A small amount of turmeric does seem to smoothen the taste of milk and it tastes better to me. My youngest daughter told me about that and made me some after studying Yoga at a place there. I guess real yoga includes some stuff about natural medicines and dietary needs. It is not only about becoming a contortionist that twists the body in ways it won't naturally go. At least at the place she studied, which gives a certificate which is recognized worldwide.

Try just a little bit of turmeric in milk, it actually tastes pleasant with a pinch of turmeric in it. Maybe we should feed turmeric to cows so the milk tastes better instead of giving them antibiotics.

How does Curcumin function?

In the case of the immune system, Curcumin boosts the function of a molecule called cathelicidin antimicrobial, or CAMP. CAMP is a component of the immune system that identifies and removes bacteria and other unfamiliar agents from the body. So increasing CAMP activity essentially increases your immunity!

posted on Jan, 4 2018 @ 12:19 PM
link
I think this proves that they need to launch a large scale study on this, this proves that at the very least there is a strong case for the benefits of high does tumeric in fighting cancer so I think that should be enough to take it to the next level and launch a proper large scale clinical trial.

They way that things work in the UK I don't see why this couldn't be done.

So what excuse will the DEA fabricate to make turmeric a Schedule II? BTW, I'm not the least bit surprised by this story. I use turmeric with black pepper to keep my psoriasis under control. It works well.

And if really serious try to source some nanocurcumin.

Its a basic human solubility issue solved with piperine.

Beyond that its the finest medicine known to science.
edit on 4-1-2018 by IgnoranceIsntBlisss because: (no reason given)

Despite the inference in the title, and the general 'spin' of the language of the article, the primary quote is:

"To the best of our knowledge, this is the first report in which curcumin has demonstrated an objective response in progressive disease in the absence of conventional treatment."

To those who misunderstand due to the pro-Turmuric nature of the article, The doctors were actually saying:

'we have no other evidence that curcumin has ever been effective'.

Sometimes you have to 'read between the lines' and realize that very many alternative medicine proponents are happy to distort the facts, usually to boost sales of their supplements (which the IBT article mentions cost £50 - equivalent to about $67 US, for 10 days of treatments, and therefore $2,473 US per year - in perpetuity).

Here is a link to the actual British Medical Journal Case Report which clearly outlines that the patient although stable, still has signs of the myeloma with paraprotein levels of 13g/L where readings have plateaued. The myeloma, therefore, has not been cured.

The BMJ report also reveals that the patient has been undergoing regular and sustained hyperbaric oxygen therapy at the same time as the dosage, which means the curcumin is not the only factor involved.

Cures for cancer are a very emotive topic and there are many who profit unreasonably from the affected. The BMJ report calls for further clinical trial of the effiacacy of curcumin but does not even slightly suggest that it has been shown to be a cure.

Tumeric also has anti-inflammatory properties which helps with things like arthritis. Make sure your tumeric has black pepper which inhibits breakdown of curcumin in the stomach and ensures it gets to the small intestine so it can be absorbed.

posted on Jan, 4 2018 @ 02:47 PM
link
I read about this in the UK paper 'i', a daily paper from the Independent group. The piece referenced how doctors in the BMJ were satisfied that by use of turmeric ALONE (following a battle with cancer of the blood), she was stable, in good condition, and there were no indications that her cancer was coming back.

I must admit, when I saw it, listed as a 'curiosity' (although respectfully covered) in the BMJ annual report on certain illness types & treatment cases, I gave a big High-5 (in my mind) to all those troopers who have been fighting to demonstrate that there are viable, genuinely effective treatment options for aggressive cancers in cases where people have tried other traditional options (chemotherapy, radiotherapy, etc) to no avail. This is a great day for the alternative research community - naturopathic medicine has myriad options for the treatment of cancer without the 'treatment' (poisoning) of radiotherapy & chemotherapy.

All hail the natural way!

posted on Jan, 4 2018 @ 03:03 PM
link
Diet is the key. I eat nothing but self-prepared Indian, Pakistani or some other kind of Asian/Mediterranean food using pure herbs and spices. With a cupboard of 15-20 spices you can make just about anything and it's easy and cheap, you just need to find a good recipe.

Add 1 lb / 500 grams of chicken cubes and marinate in the fridge for a an hour or two.

Serve with salad and pita bread and lashings of peanut sauce.

originally posted by: Skywatcher2011
Maybe they need to swap conventional treatment with natural treatment, oh my bad, Big Pharma won't like it too much.

LOL the tablets she took are made by Sabinsa, a pharmaceutical company... yep, Big Pharma. Here's the link.

Unfortunately eating turmeric won't help, as it only contains 2% curcumin and it would be impossible to ingest 8g a day. Luckily British doctors work in co-operation with 'Big Pharma' and don't object to patients also using complementary therapies (when they don't interact negatively with their treatment of course).

This is exciting news and hopefully clinical trials will begin in the near future.


OP, despite the fact you said Turmeric helped, when it's actually one of its component (curcumin), I want to say thank you for posting this.

posted on Jan, 4 2018 @ 04:31 PM
link
I have AVM in my lungs which is pretty rare. It causes me to cough blood and it's not at all easy on the bod.
Since I started taking turmeric and cayenne every morning - I've not had a coughing bought in almost 2 years.
I swear by the stuff for sure. Great stuff.

posted on Jan, 4 2018 @ 04:34 PM
link
I get bad migraines if I have too much tumeric. A little mustard on a hot dog usually doesn't cause any problems.

This story smacks more of anecdotal evidence than a clear test with proof that tumeric does anything to cancer at all.

There are threads on this site with some great real time feedback and results ...
edit on 9-1-2018 by Timely because: (no reason given)

posted on Jan, 9 2018 @ 05:48 AM
link
My cat had a fairly large sebaceous cyst on the side of his mouth. I mixed a little bit of turmeric in his wet food each day and the cyst went down significantly. (I am very lucky to have a cat who isn't picky with food!)